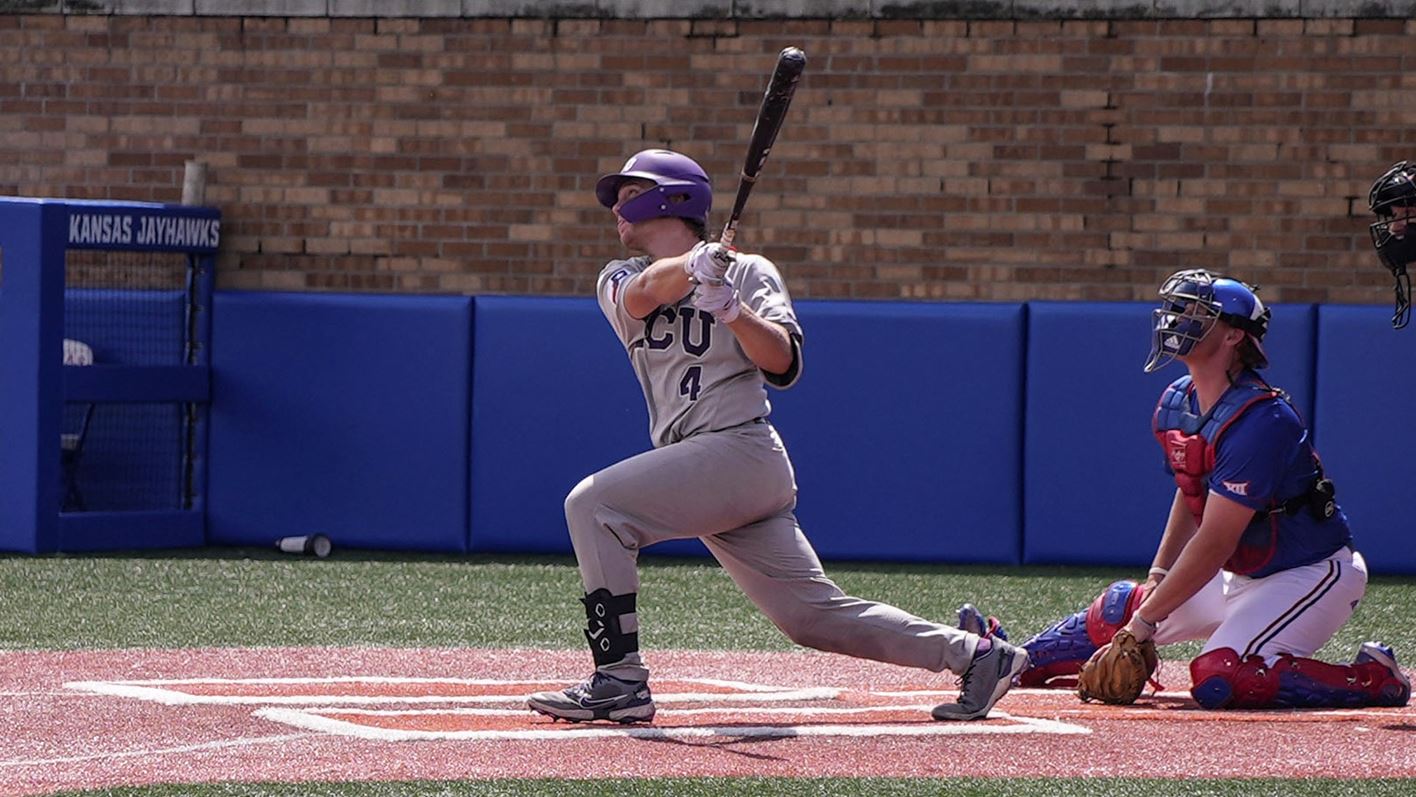 TCU accomplished everything it needed to and more against hapless Kansas

TCU catcher Kurtis Byrne connected for a home run Sunday as the Frogs finished off a sweep of Kansas (TCU athletics).

Anything less than a three-game sweep at Kansas would have rated as a disappointment for TCU, and not just for the players and coaching staff.

The formulas and committee that determine postseason fates would have held a non-sweep against the Horned Frogs. Their chances at a Big 12 Conference regular-season title would be diminished, and their seeding for the Big 12 tournament next week likely wouldn’t produce as favorable a first-round matchup.

TCU didn’t clinch anything Sunday when it finished off the needed sweep of the Jayhawks, 8-2 in Lawrence, but the Frogs kept themselves in the running for their immediate targets and might have buoyed themselves for a late surge.

The Frogs finished the weekend with 53 runs in the series, including a program record-tying 30 on Saturday in a 30-3 rout. Porter Brown, the MVP of the 2021 Big 12 tournament, drove in a single-game TCU record 10 runs in the 27-run blowout and is getting hot again at the right time.

Right-hander Riley Cornelio returned from injury Sunday to allow two runs in 4 1/3 innings. Third baseman Brayden Taylor hit his 10th homer of the season and Kurtis Byrne his fourth, and they were two of the five players who collected two hits apiece.

The Frogs finished Big 12 play at 16-8. They won’t play again until Thursday, when they host Santa Clara in a three-game series to end the regular season. They can sit back and watch as Texas Tech (14-7), Oklahoma State (13-8) and Oklahoma (13-8) jockey in their final Big 12 series.

Oklahoma plays at Texas Tech while Oklahoma State plays at Baylor. TCU is looking at no worse than the No. 3 seed in the conference tournament.

The Frogs didn’t fix all their holes in Kansas.

Questions still exist in the rotation, and the Frogs are going to need starters in the Big 12 tournament May 25-29 at Globe Life Field and wherever they go in the NCAA Tournament.

They have to clean up their defense. Extra outs lead to extra pitches and extra scoring chances at a time when there’s little margin for error.

The offense, which is usually one of the best in the conference, needs to stay that way.

The bats were rolling over the weekend.

The Frogs did what they needed to do at Kansas.