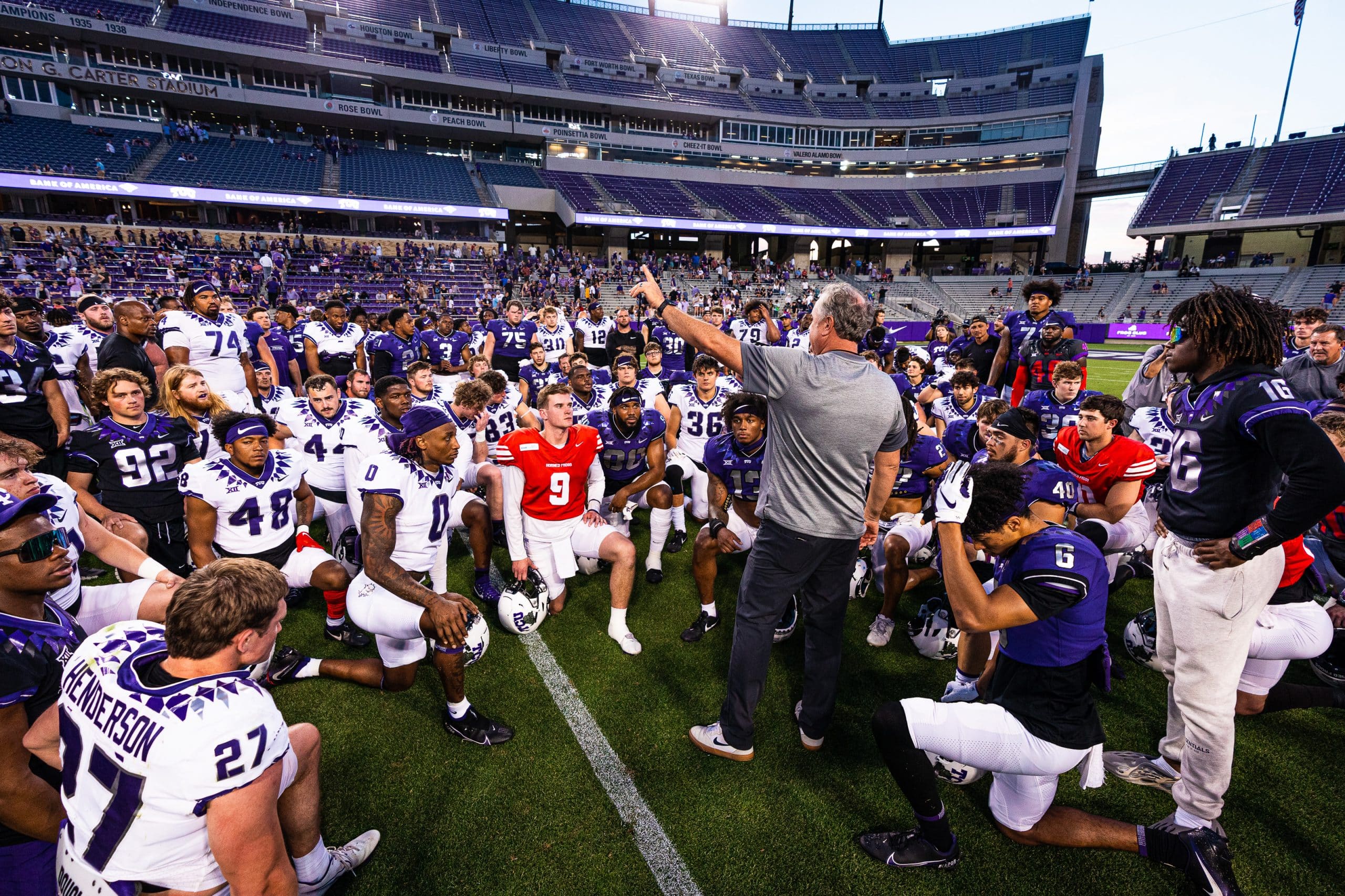 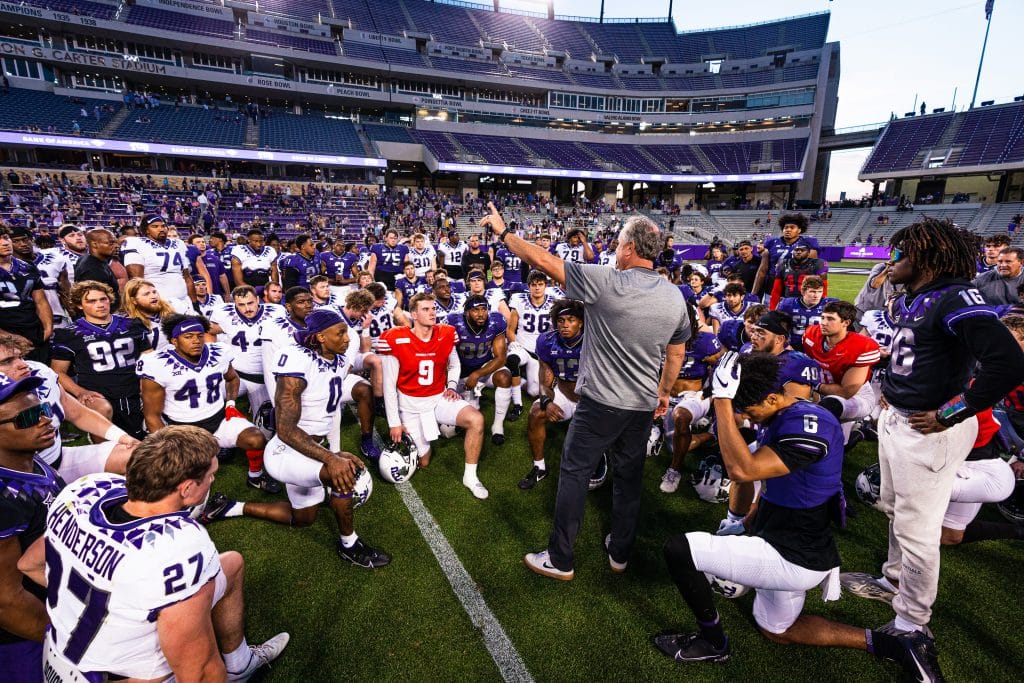 FORT WORTH — The transfer portal closed May 1, and those who beat the deadline are mulling their options.

High school juniors have a week or two to go until summer break begins, but are still finding time to talk to college coaches.

TCU has been busy with both groups of players, and those players have been very receptive.

The Frogs have landed defensive linemen Lymon Mitchell, from Georgia, and Caleb Fox, from Stephen F. Austin, for 2022 since the end of spring practices April 22, and gained commitments for the Class of 2023 from offensive lineman Trevor Goosby (Melissa) and wide receivers Cordale Russell (North Mesquite) and Rohan Fluellen (Gilmer).

What does all of this mean? Glad you asked.

Mitchell and Fox fill needs that the coaching staff knew it needed before spring practices ended. Both are 300-pounders and will have a chance to play right away.

Give an assist to defensive line coach JaMarkus McFarland, who joined the coaching staff from Stephen F. Austin. Fox followed the coach who recruited him from The Woodlands.

The prep recruits are an indication that TCU could be on the rise again in Texas prep circles. Russell is a four-star recruit who could become a potential replacement for Quentin Johnston should he leave early for the 2023 NFL Draft.

If Russell sounds familiar, he should. Originally an SMU commitment, he followed coach Sonny Dykes to TCU in the fall but then reopened his commitment. It’s closed again after he gave his commitment yet again to the Frogs over the weekend.

The coaches are working hard. It will be interesting to how it pays off in the fall and ultimately in December for the first signing period.

TCU, the nation’s top men’s tennis team, wiped out North Carolina State on Saturday in Fort Worth and is headed to the Elite 8 of the NCAA Championships this week in Champaign, Ill. The Frogs will face Kentucky on Thursday.

TCU won the doubles point over the Wolfpack and won the first set in the first four singles matches. Needing only three wins to advance, Luc Fomba, Sander Jong and Jake Fearnley won in straight sets.

“They just keep bringing it one,” coach David Roditi said. “I love how, when things got tight at the end of the first sets and the end of the second sets, they just upped it up a notch.”

The men will be looking to add the outdoor national championship to the indoor title they won in February.

The TCU men’s 4×100 relay team is a contender for the national title after the Bryson Stubblefield, Tinotenda Matiyenga, Kundai Maguranyanga and Robert Gregory Jr. raced to a meet record Sunday at the Big 12 Championships in Lubbock.

The quartet posted a time of 38.50 seconds, the second-fastest mark in the country ad only 0.03 seconds off the fastest (Florida). Texas finished second, nearly a quarter of a second behind the Frogs’ runners.

TCU took first place in two other events Sunday. Senior Chengetayi Mapaya won the triple jump with a mark of 16.84 meters, which is also second in the country. Devin Roberson took the discus with a throw of 57.36 meters.

They advance to the NCAA West Regional on May 26-28 at Arkansas.

Justin Gums and Aumeric Laussot will compete this week in the men’s golf NCAA Regional at Traditions Club, in Bryan. Only one individual who isn’t on the top teams advances to the NCAA Championships. That’s where the women’s golf team and men’s tennis teams are headed.

Lucky 7s: No city had ever had two teams play Game 7s in the playoffs until the Dallas Mavericks and Dallas Stars played win-or-go-home games Sunday.

Luka Doncic, who wears double sevens for his jersey number, helped the Mavs shock top-seeded Phoenix 123-90 to advance to the Western Conference finals.

The Suns posted the best regular-season record in the NBA, but were dismantled by the Mavs. Doncic scored 27 first-half points, matching the entire Suns team en route to a 57-27 lead.

They kept pouring it on in the second half, shooting their way to a 46-point lead. Doncic scored 35 points, Spencer Dinwiddie scored 30 off the bench and Jalen Brunson scored 24.

The Stars just missed advancing. The Calgary Flames got them in overtime for a 3-2 victory.

Classic country: I left the Rangers game Friday in the eighth inning to get a jump on my lightest day of week for RangersToday.com (subscribe for $5.99 a month or $60 a year). And how do I entertain myself with the extra hour? Looking through Instagram, of course.

It was worth it. I found not one, but two, accounts dedicated to my favorite genre of music, classic country (yeah, I’m the life of parties and long road trips). If you haven’t watched the Ken Burns documentary on country music, you should. It’s terrific. And I stumbled across almost all of the names in that documentary.

I’ll get to that eventually. For now, here’s one of my favorites, Waylon Jennings.

Bad golf shots: At least no one was watching. Probably. Enjoy. See you next week.