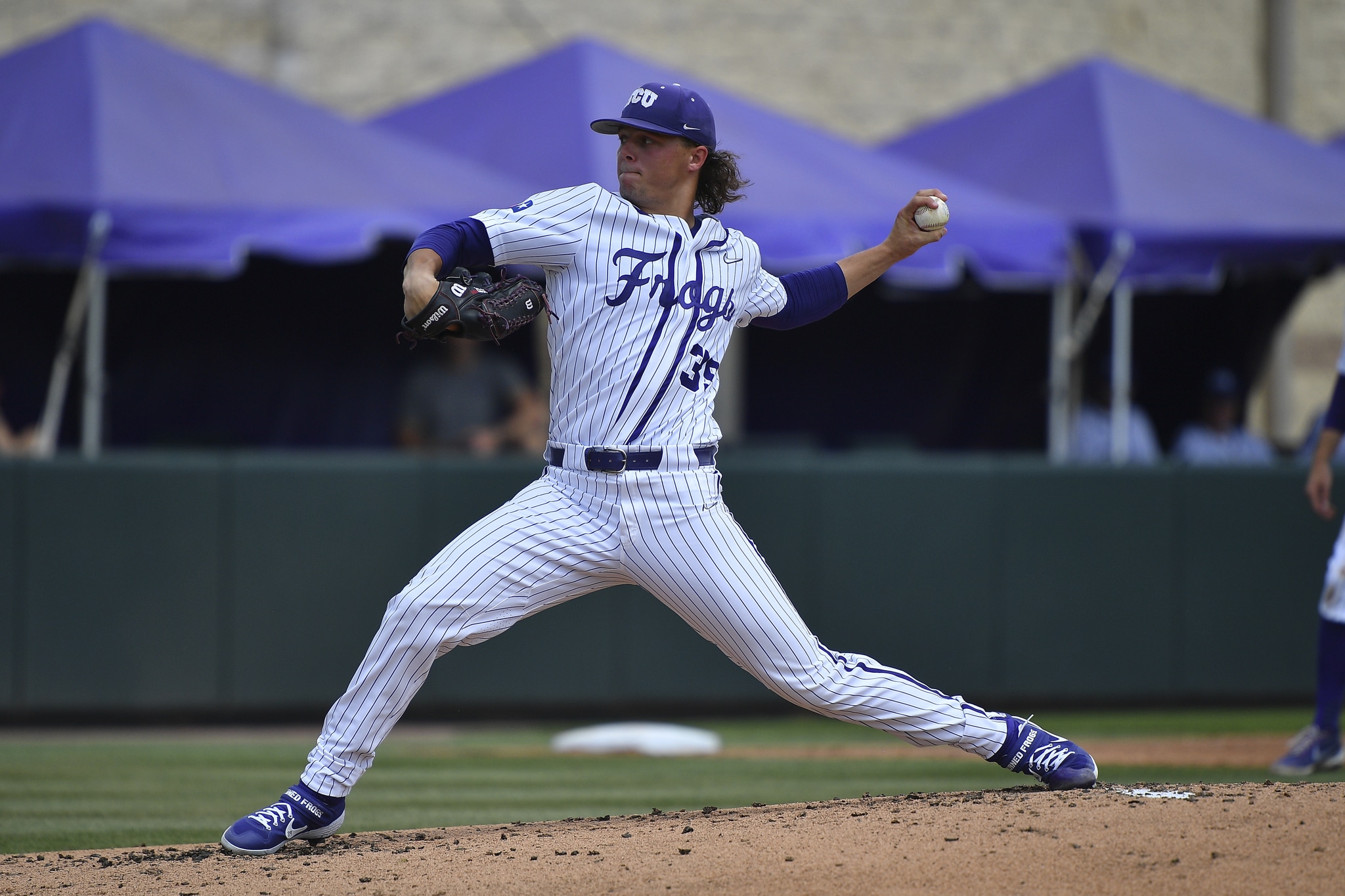 TCU baseball opens Kirk Saarloos Era this weekend. Here’s who and what you need to know.

Home » TCU baseball opens Kirk Saarloos Era this weekend. Here’s who and what you need to know.

TCU will open the 2022 season Friday with left-hander Austin Krob in place as the undisputed Friday starter (TCU athletics).

FORT WORTH — A trip to Arizona in the springtime should top all baseball fans’ bucket list.

It’s not just that the weather is close to ideal, though the mornings can be a little too crisp to wear shorts. Phoenix Metro is a mecca for MLB spring training, with 15 teams (including the Texas Rangers) conveniently camped in the area.

There are also multiple college baseball tournaments in mid- and late-February from Surprise to Scottsdale, where the TCU baseball team will be opening its 2022 season and the Kirk Saarloos Era this weekend.

The Horned Frogs are one of four teams in the MLB4 Tournament at Salt Rivers Field in Scottsdale, and will play San Diego State tonight at 6. The game is being televised by MLB Network.

The defending Big 12 Conference regular-season and tournament champions have some holes to fill. Six players, including Friday starter Russell Smith and closer Haylen Green, were picked in the 2021 MLB Draft, which is one reason TCU is ranked either in the lower half of various top 25 preseason rankings or not ranked at all (Baseball America).

Saarloos believes the Frogs have patched the holes via the transfer portal. The group of regulars that returns from last season is more than capable, and other returnees from the 2021 roster will be expected to take steps forward in their development.

Twenty-two players are back from the 2021 roster, split evenly between position players and pitchers. The returning offensive players batted .278 with 48 doubles and 25 home runs. The pitching group posted a 3.58 ERA.

Here’s a look at the key players who are back, the key newcomers to the program and what to watch over the Frogs’ 55-game regular-season schedule.

Austin Krob, LHP: The draft-eligible sophomore is the unquestioned Friday starter to open the season after making a team-high 16 starts in 2021 and going 8-1 with a 3.81 ERA, 37 walks and 96 strikeouts in 85 innings. He was selected as a second-team preseason All-American and is on the All-Big 12 preseason team. A transfer from Kirkwood Community College not far from his hometown of Lisbon, Iowa, Krob’s fastball sits in low- to mid-90s with deception from a three-quarters arm slot.

Brayden Taylor, 3B: The other player selected to the All-Big 12 preseason team is Taylor, the Big 12 Freshman of the Year in 2021 and a freshman All-American after batting .324 with 12 home runs and a team-high 23 multi-hit games. Watch out for him on the bases, too. He swiped 15 bags last season in the high-octane Frogs’ offense that looks to put pressure on opposing defenses. Taylor can play second base and shortstop if needed.

Riley Cornelio, RHP: Cornelio, from the great state of Colorado, made only five starts last season as a “COVID freshman” despite being considered a top-100 draft prospect in 2019. He will make up for that this season, with his first start scheduled for Saturday. Cornelio showed well in a fall start against a group of Rangers minor-leaguers, pumping his fastball as high as 96 mph with quality off-speed offerings.

Marcelo Perez, RHP: Perhaps the leading candidate to close games this season is Perez, who handled the ninth inning as a freshman. Not only is he a candidate, he wants that duty, which is telling of his makeup. He has stuff, too. Perez was selected in the 20th round by the Angels but chose to return for his junior season.

Gray Rodgers, 2B: The best baseball teams are solid up the middle, and TCU has that with Rodgers, shortstop Tommy Sacco and center fielder Elijah Nunez. Rodgers packs the most punch at the plate and will be stationed in the middle of the Frogs’ batting order. He was selected to the All-Big 12 tournament team last season and was an honorable mention all-conference pick.

Brett Walker, RHP: A graduate transfer from Oregon, Walker slides into the starting rotation after a nice 2021 for the Ducks (6-3, 3.66 ERA, 83 2/3 innings). His experience will be a big among a group of starters that overall should be young.

Michael Petrie, C: A young pitching staff needs a veteran catcher, and the Frogs had an opening for Petrie following the steady career of Zach Humphries. Petrie is a defensive-minded catcher with a .992 fielding percentage in five seasons at Washington. He will share duties with sophomore Kurtis Byrne.

Caleb Bolden, RHP: A transfer from Arkansas, Bolden could establish himself as a versatile reliever in the mold of Charles King. Ten of Bolden’s 17 appearances last season were as a starting pitcher, so he can easily log multiple innings out of the bullpen.

Logan Maxwell, OF: Considered one of the top incoming freshman in the Big 12, Maxwell will get plenty of at-bats. He hit a robust .600 with 10 home runs, 39 RBIs and 24 stolen bases last season as a prep senior en route to being named the Ohio Division II Player of the Year. He also won a gold glove for his defense.

Reed Spenrath/David Bishop 1B:  The Frogs need a first baseman, so enter Spanreth and Bishop. Spanreth showed terrific power (16 homers) in 2021 at Cisco College. Bishop played shortstop and third base in high school, but will play some first to get his bat into the lineup. He could also provide some power as a freshman.

Can winning ways continue?: Schlossnagle helped put TCU back on the college-baseball map, but he did so with considerable contributions from Saarloos as pitching coach. The Frogs won 346 games (.669 winning percentage) in Saarloss’ nine seasons as an assistant, which ranks seventh nationally and the most by a Texas college.

Young pitchers: TCU needs more than their three weekend starters, so the rotation could be in flux early in the season. Saarloos said he was planning to stretch out six starters in practices leading up to the regular season. Don’t be surprised if Cam Brown, who was a top-75 draft prospect in 2020, emerges. The right-hander from Flower Mound looked good in the fall.

Injured pitchers: Saarloos mentioned that a group of incoming pitchers are dealing with injuries, including regarded freshman Caedmon Parker. While the pitching depth should hold for this season, it could be thin for 2023 depending on how many can get healthy enough to pitch this season.

Grand theft: TCU has been one of the national leaders in stolen bases the past several seasons, finishing third in 2021 with 121. With 722 steals, the Frogs are one of only two Power 5 schools with at least 700 steals the past eight seasons  — at a 78.1% success rate.

Loaded Big 12: The Frogs were picked to finish fourth in the preseason poll in voting by the 10 Big 12 coaches. Texas is ranked No. 1 in the nation in multiple polls, including the D1Baseball Top 25 that also includes Oklahoma State (No. 7), Texas Tech (No. 14) and TCU (No. 17).