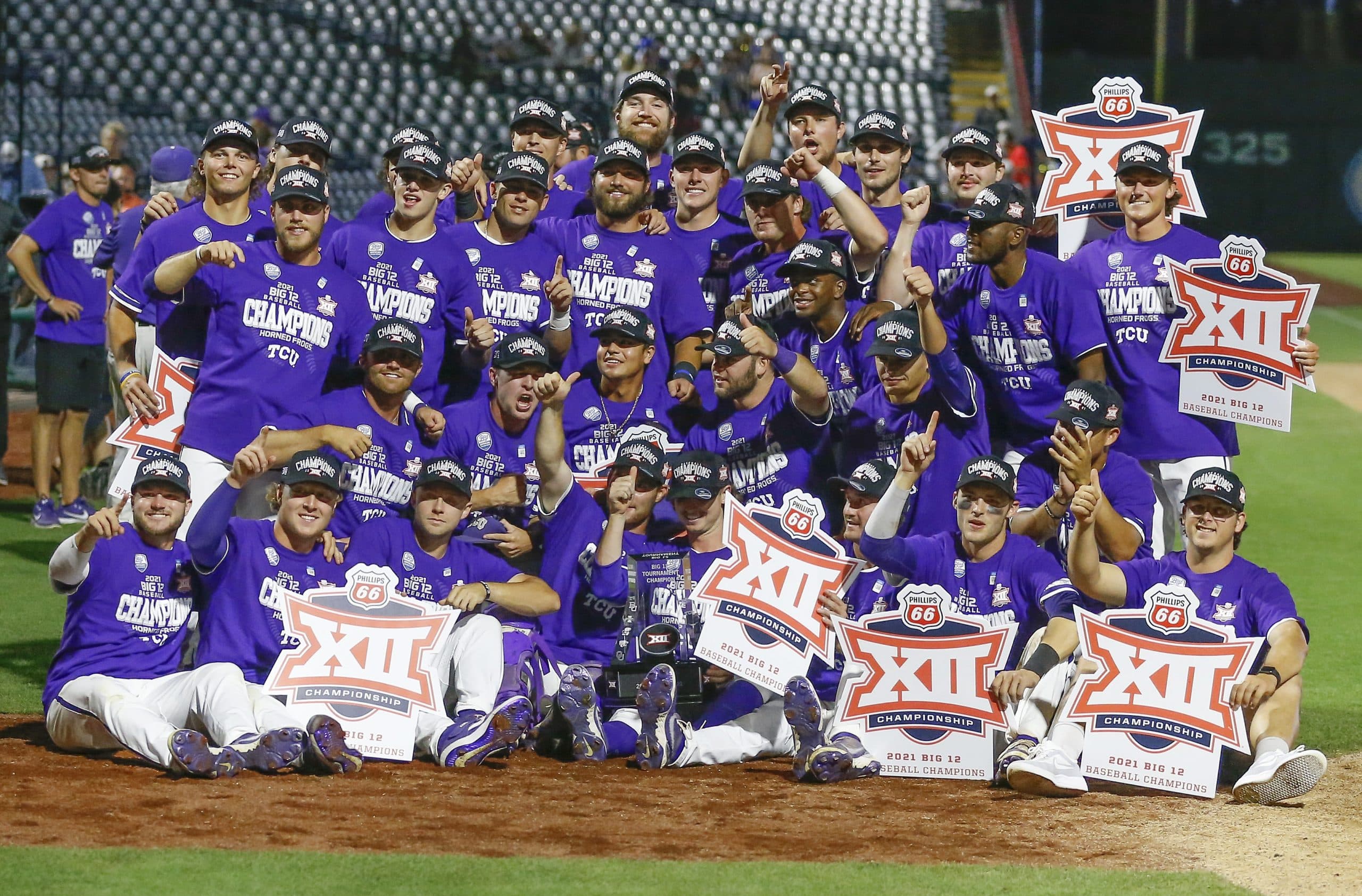 TCU baseball practices under way with new head coach, but only one notable change

Home » TCU baseball practices under way with new head coach, but only one notable change

TCU captured the Big 12 tournament last season, but a coaching change might be overshadowing the Frogs’ chances in 2022 (The Associated Press/Alonzo Adams).

FORT WORTH — Practices started Friday for the TCU baseball team, which for the first time since 2004 has someone other than Jim Schlossnagle overseeing the club.

He bolted for Texas A&M after the Horned Frogs bowed out of the NCAA Tournament in the regional round, a noteworthy departure for a program he put on the college baseball map. But anyone who thinks he left the program without a rudder is mistaken.

The Frogs of 2022 are going to be almost identical to last year’s team in how they play the game because of the continuity in the coaching staff.

However, the Frogs are going to be different.

Saarloos will allow players to let their personalities show on the field. They will respect the game, sure, but they won’t be afraid to let everyone in the ballpark, including in the opposing dugout, know that they are having fun.

Call it freedom. Call it no longer walking on egg shells. But it’s new to TCU under Saarloos.

“Baseball is a tough sport,” he said. “You need to enjoy the the highs and get through the lows and try and be as even keel as you can. It’s a momentum sport, too, so we’re going to try and keep as much momentum in our dugout as possible. So, play with a little bit more swagger, a little bit more personality of each player, just let it come out and have some fun.”

Winning is fun, Saarloos said, and TCU did plenty of that under Schlossnagle. Saarloos was the pitching coach the past nine seasons, which included four straight trips to the College World Series from 2014 to 2017.

TCU won the Big 12 regular-season title and tournament last season, beating Oklahoma State to earn the No. 6 national seed and the opportunity host a regional. The Frogs won the opener at Lupton Stadium but dropped the next two to end their season.

The Frogs are getting attention nationally, at No. 17 in the DI Baseball preseason poll and No. 13 in the first Collegiate Baseball poll. Baseball America did not have TCU in its top 25.

Big 12 coaches pegged TCU as the fourth-best team in the conference.

None of that really matters to the Frogs, who open the 2022 season Feb. 18 at the MLB4 Tournament in Scottsdale, Ariz.

“It’s cool to see that we’re ranked, but it’s just a number,” said sophomore infielder Brayden Taylor, a preseason All-Big 12 selection. “We’ve still got to go out there and still got to compete against every team. This year our mind-set is go out there and play baseball. Just got to win games.”

Taylor confirmed that things are mostly the same within the program after the Schossnagle departure. TCU will still be aggressive on the base paths to help keep one of the nation’s best offenses churning, and Saarloos will still have his hands on a pitching staff that lost staff ace Russell Smith (second round) and closer Haylen Green (20th round).

The plan is to stretch out six starters before the season begins and possibly have some moving pieces in the rotation once the season is under way. Austin Krob, though, returns and is expected to be the Friday starter. The lefty joined Taylor as a preseason All-Big 12 pick.

Marcelo Perez, who was also a 20th-round pick but didn’t sign, hopes to return to the closer role. He likes closing games because of the adrenaline rush and the emotion that comes with securing a victory.

If anything changes this season from the Schlossnagle era, it’s that players won’t be shy in letting folks know how they feel.

“It’s more relaxed. We’re not as tensed up,” Perez said. “But the competitive atmosphere still is still here.”