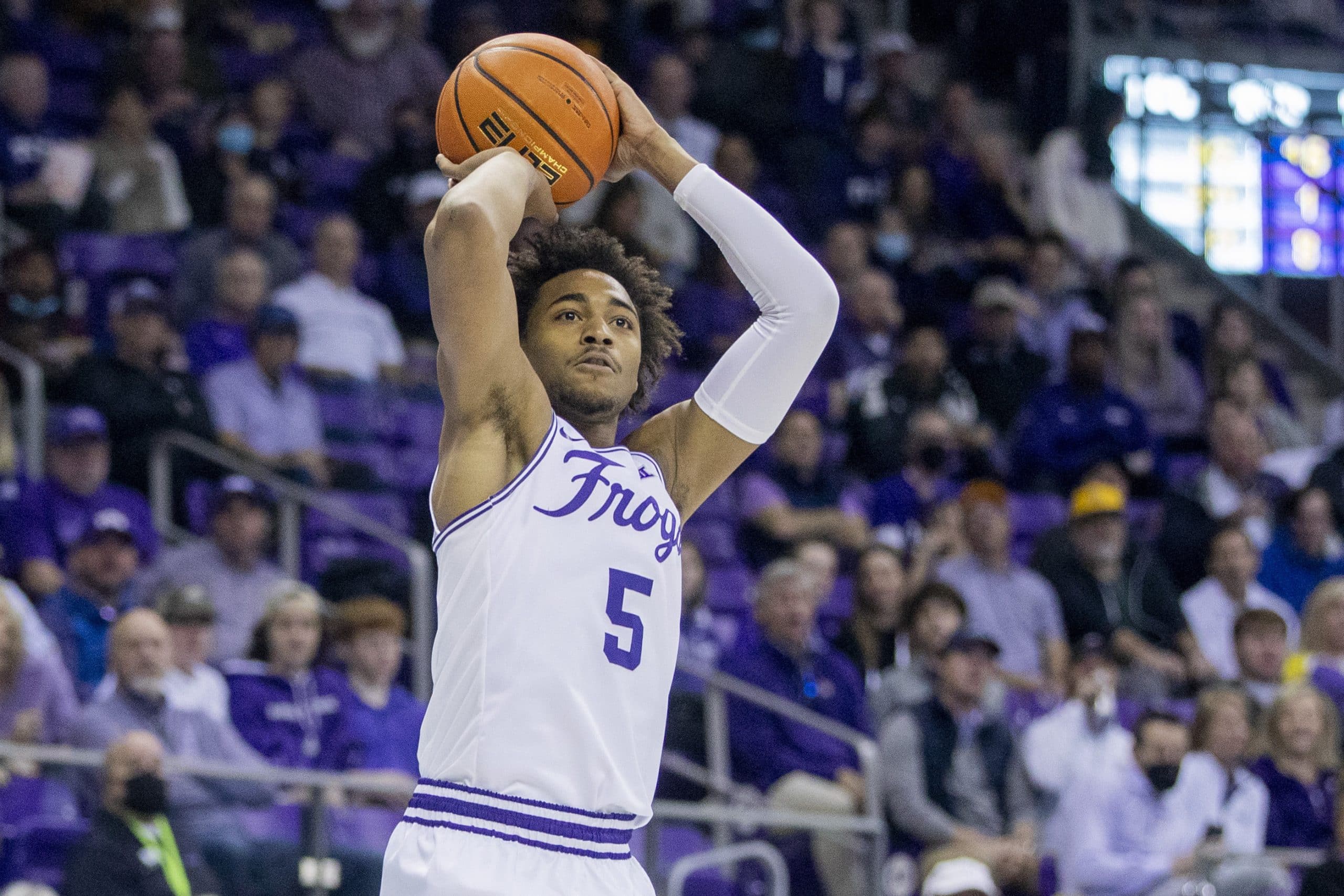 TCU upsets No. 19 LSU to shake off disappointing loss to Texas

Home » TCU upsets No. 19 LSU to shake off disappointing loss to Texas

Chuck O’Bannon Jr. drained 3 3-pointers early in the second half en roue to tying his career high with 19 points (The Associated Press/Gareth Patterson).

FORT WORTH — The last time prior to Saturday morning that the TCU men took the floor they left it embarrassed, blown out by Texas in front of the largest crowd in program history.

Among the many questions afterward was how the Horned Frogs would respond against a ranked team with the nation’s best defense. The Frogs had three days to collect themselves and answer that question against No. 19 LSU.

Whatever it was they did, they need to grab hold and not let it go.

TCU responded with a 77-68 victory that will do wonders for the Frogs’ NCAA Tournament chances. Mike Miles Jr. and Chuck O’Bannon Jr. scored 19 points each, and Damion Baugh added 14 in a game that was part of the Big/SEC Challenge.

TCU (14-4)  saw a 16-point second-half lead trimmed to one with 9:36 to play, but handled the LSU pressure well down the stretch and seemingly had an answer each time the Tigers (16-5) scored.

“I said it Tuesday after the game, we need to bounce back, and that’s exactly what we did,” Miles said. “We didn’t want that to happen again, especially at home, and we had that mind-set coming in.”

The game was a 180 from the Texas game, when TCU was outrebounded and out-hustled in their worst game of the season. They bogged down offensively in their set plays and shoot poorly when they finally did get off a shot

But the Frogs beat LSU on the glass, were more aggressive on offense and handled full-court pressure better. TCU is the first team this season to score more than 70 points against LSU, which entered atop the Ken Pomeroy defensive rankings.

The Frogs shifted gears mentally after the Texas loss, due in part to some hard truths delivered by the coaching staff.

“We had two great practices. We prepared. We took on the challenge,” coach Jamie Dixon said. “Yes, we were hard on them. We called them out. We know why we got beat, beat badly.”

Miles scored 11 points in the first half, when TCU took a 38-29 lead, in a variety of ways — driving to the basket, hitting short jumpers and sinking free throws. Emanuel Miller score the Frogs’ first four points on short jump shots, and Baugh’s first six points game on nifty moves after penetrating inside.

O’Bannon scored only three points in the first half, but scored 11 in the first 4:04 of the second. He hit from inside the 3-point arc for TCU’s first second-half basket, then hit 3-pointers on three straight positions to give TCU a 50-34 lead.

The buckets came as Miles and Baugh broke the LSU press and found O’Bannon in the right corner.

“They felt good,” he said. ” They’re pressing up top, so that opened it up for me in front court. That was that.”

That’s when Miles took over. He scored eight straight points for TCU and found Baugh underneath for a layup that was good for a 75-67 lead with 1:30 to play.

“I like those moments,” Miles said. “They were coming back and I was kind of had the mind-set of I’m just go to the rim and try to get fouled, and that’s what happened.”

What happened in the three days after the Texas loss was the key to victory.