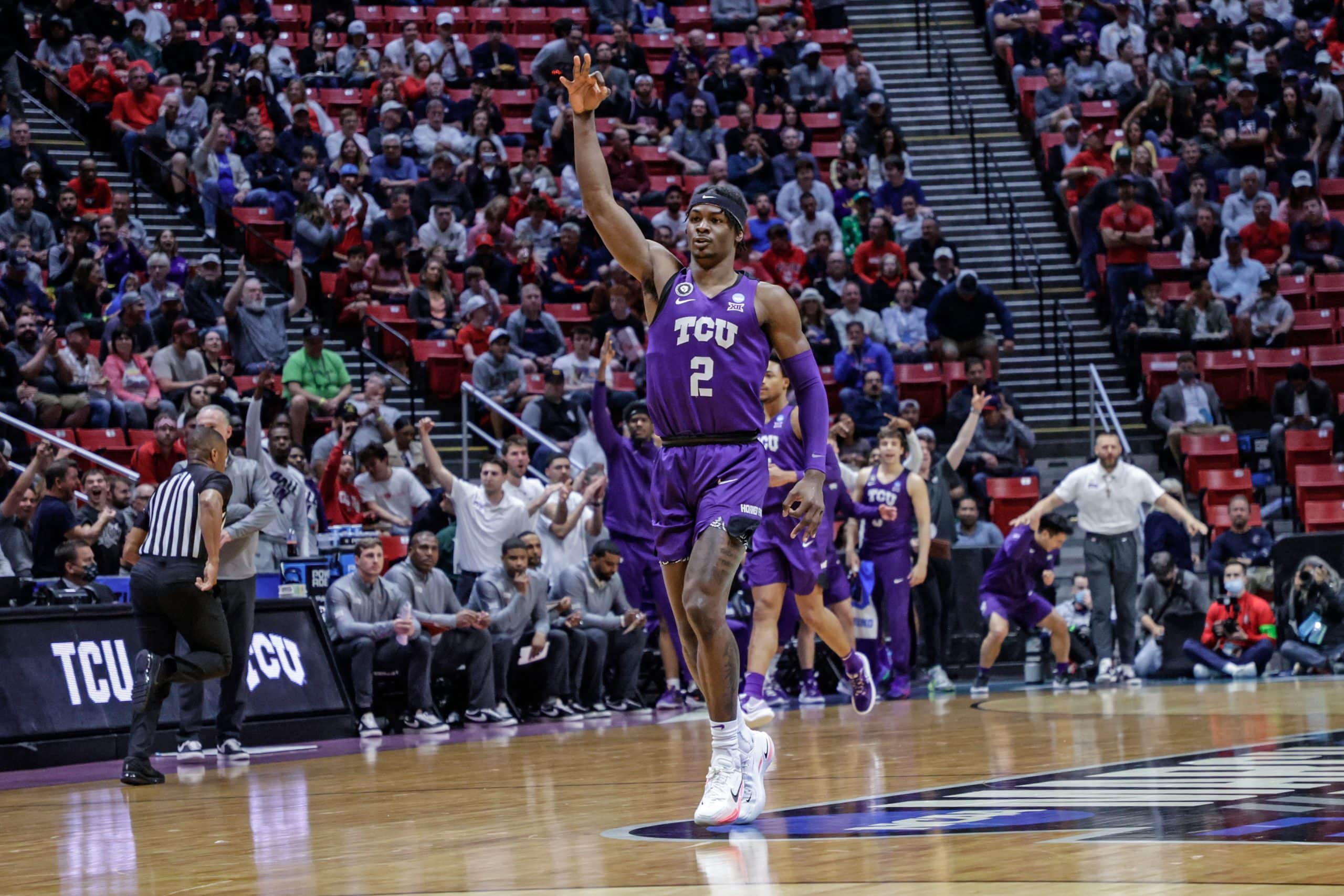 TCU basketball has traveled light years in just one season

By Jamie PlunkettMarch 22, 2022No Comments

Mike Miles fell to the ground, the ball rolled away, and the crowd around me erupted. Expletives were hurled with gusto at the big screens in the Mirage sports book in Las Vegas, all of which displayed TCU’s second-round game against No. 1-seed Arizona.

Everyone, even the Arizona fan clad in a bright red sports coat covered in Arizona’s classic ‘A’ logo, acknowledged that Miles was fouled in the final seconds of regulation during TCU’s 85-80 overtime loss to the Wildcats.

While that consolation didn’t mean much to this Horned Frog, what I witnessed in Las Vegas on Sunday night was a sign of just how far TCU basketball has come in a short amount of time.

Just one month ago TCU was in the midst of four losses in five games. Their NCAA Tournament hopes were teetering, and some Frogs fans were beginning to question TCU coach Jamie Dixon’s ability to lead the team.

TCU’s turnover-prone play, coupled with just one NCAA Tournament appearance in Dixon’s first five years on campus, was enough to get the rumblings started. Now, just a month removed from that mid-February slump, fans have witnessed their team become national darlings.

That normally doesn’t happen in a second-round exit, but Eddie Lampkin’s big personality, coupled with TCU pushing Arizona to the brink, has exposed the entire college basketball world to TCU’s yet-to-be-fully-realized potential.

I would listen to a two-hour podcast that's just a livestream of everything Eddie Lampkin has said during this game.

Jamie Dixon recruiting Eddie Lampkin Jr. by showing him footage of Chevy Troutman and DeJuan Blair and telling him to "join the brotherhood, and finish this important work."

eddie lampkin has me believing the 7-footer is actually small

Meanwhile, back at the Mirage, chants of “Eddie, Eddie, Eddie” broke out as Lampkin pulled down his 10th offensive rebound of the night and scored to put TCU ahead 72-70. Several folks imitated Lampkin’s flex and his “too small” gesture.

The Texas/Baylor married couple next to me asked if Eddie was coming back next year, clearly hopeful he would depart for other opportunities. In his 20-point, 14-rebound performance, Lampkin helped alter TCU’s trajectory as a program.

But it wasn’t just Lampkin on Sunday night. TCU’s performance in their first-round 69-42 drubbing of 8-seed Seton Hall was the first indication that the Frogs were ready to place themselves on the map.

Of course, it was also confirmation of what Dixon and TCU athletic director Jeremiah Donati hinted at immediately following Selection Sunday: that TCU was perhaps seeded too low.

Make up for a lot of years is right. TCU’s basketball reputation has been largely non-existent since Dixon left campus as a player, having taken TCU to the tournament in 1987. That was the last time TCU won a tournament game until Friday.

While players like Kurt Thomas, Lee Nailon and Corey Santee are responsible for momentary upticks, Dixon has brought about the first period of steady growth in program history.

Winning the NIT in his first season on campus did wonders for morale around the program. Making TCU’s first NCAA Tournament appearance in 20 years kept the rise going, even if the Frogs were upset in the first round by No. 11-seed Syracuse.

Going .500 in Big 12 play in 2019, a feat that continues to become more and more difficult, had TCU fans reminiscing about going 0-18 in conference play just four seasons earlier.

Stringing tournament appearances together is the next step, and that begins with bringing back the core of this team.

Dixon and his staff, along with NIL groups like the Flying T Club, can’t allow another transfer exodus like 2021. TCU watched nine players transfer out of the program, while another eight transferred in. The results of this new squad speak for themselves, but now the goal is consistency and continuity.

Of course, Emanuel Miller, Chuck O’Bannon, and Damion Baugh have already transferred once, meaning they’d need to sit out a season if they were to leave. For O’Bannon, the 23-year-old who still has two years of eligibility thanks to a medical redshirt from his time at USC and a COVID year, leaving now doesn’t make much sense.

Miles has NBA potential and will undoubtedly be courted by other “bigger” programs this offseason, and Lampkin’s rise over the last two months likely means he’ll have suitors, too. Keeping the duo will be critically important to TCU’s continued success.

None of that’s to say that TCU won’t recruit from the transfer portal, either.

TCU’s performances against Seton Hall and Arizona have not only gained national attention from fans, but from players and recruits, too. Playing alongside this core group is an attractive opportunity for players, and TCU will be looking for one or two guys who can help the Frogs reach that next level.

And, of course, TCU fans have a task as well. Keep showing up. The attendance records set by TCU students and fans this season are proof that the program has support. That support will need to continue to grow alongside the program.

In my conversation with Alex Robinson before the NCAA Tournament, he was adamant about that point.

“We as fans have to keep showing up.” Robinson said. “Because DFW is full of hoopers.”

He’s right. If TCU fans can create an atmosphere even better than the one they did this season, more and more players are going to want to come to Fort Worth to play basketball.

That means Frogs fans have to show up even through bumps in the road, which will undoubtedly come. Patience is a virtue that doesn’t show up a lot in the sports world, especially in the era of instant gratification.

For TCU fans, though, supporting the Frogs in the Big 12 will come with its bumps and bruises. It’s important to recognize that the two most successful programs in the conference currently have the two longest-tenured coaches: Kansas and Baylor.

Scott Drew didn’t win an NCAA Tournament game until year seven at Baylor. He won a championship in year 18.

Bill Self has continued Kansas’ historical run of dominance during his 20-year tenure with the Jayhawks.

It’s possible to exercise patience with Dixon while also recognizing how TCU basketball can continue to grow and improve.

Maybe then, TCU will go from casino darling to betting favorite.