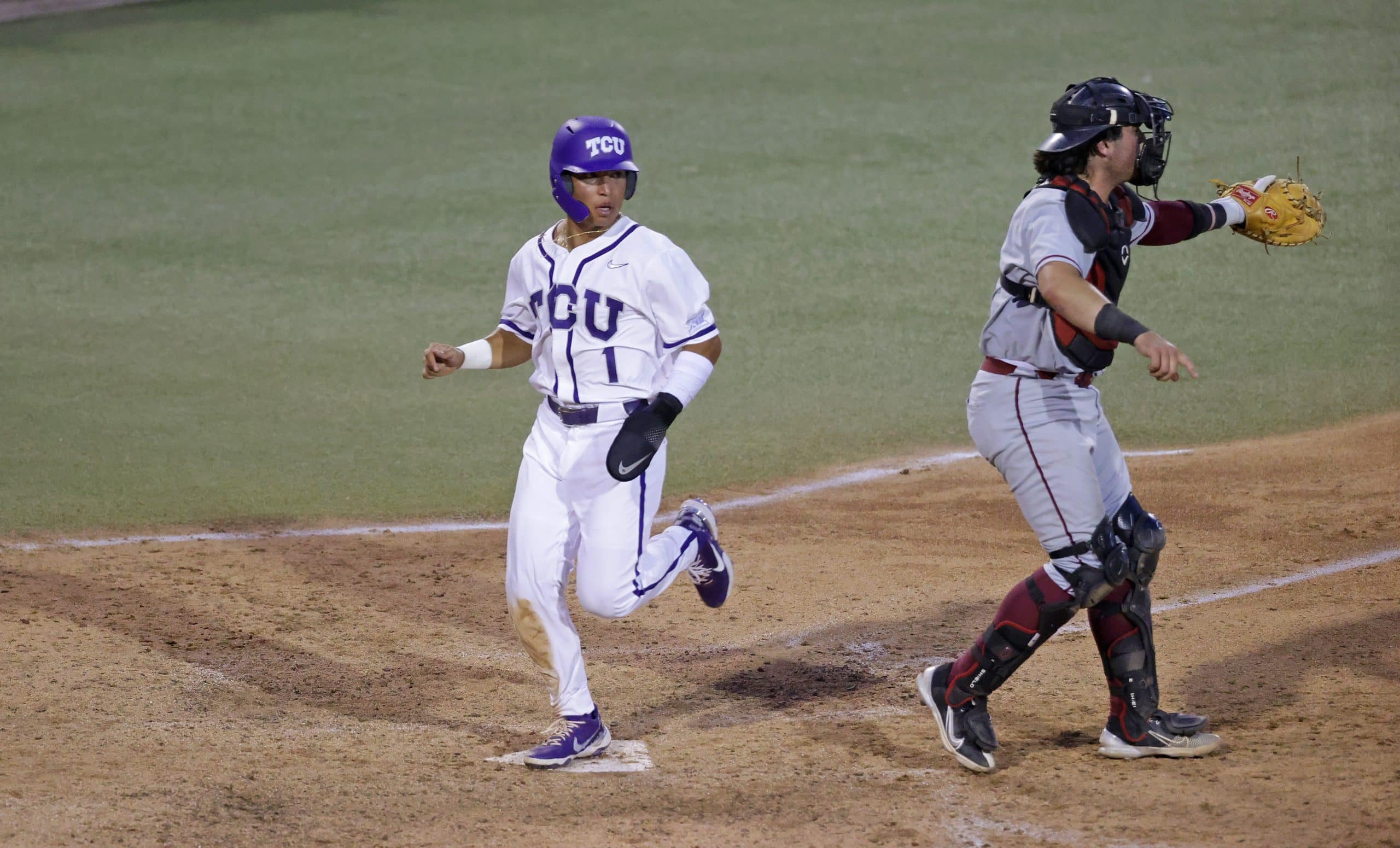 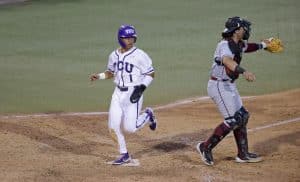 TCU vs. Santa Clara Broncos at Lupton Stadium in Fort Worth, Texas on May 19, 2022 (Photo by/Gregg Ellman).

Post hoc ergo propter hoc is a latin phrase that means “After it, therefore because of it.” It suggests that events are directly influenced by the things that come before them. It’s a fun saying, but in TCU’s case Thursday night it wasn’t true. TCU defeated the Santa Clara Broncos 7-6 on Thursday night. Minutes later, the Frogs became Big 12 regular season champions.

The latter came thanks to Oklahoma’s 13-8 win over Texas Tech, guaranteeing that the Frogs will at least share the regular season title with either the Sooners or Red Raiders, depending on how things shake out over the weekend. Oklahoma State was eliminated from the title hunt after Baylor walked them off 13-11 on Thursday night.

The title is TCU’s seventh regular season or Big 12 tournament title since joining the conference, and 18th title overall.

Of course, it can be tough to stay focused on the task at hand when you know your title hopes rely on a game somewhere else. For the Frogs though, it wasn’t an issue.

“Not one of our guys asked. We didn’t talk about it, ” Kirk Saarloos said. “We had a ball game to play, and we’re not going to scoreboard watch.”

“As a team we’re worried about where we are as a team,” Elijah Nunez said afterward, “We can’t control what’s going on in Lubbock, so we just try to get W’s when we can and the rest will take care of itself.”

So on Thursday night TCU embarked on their attempt to compartmentalize the opportunity to win a Big 12 title with the task at hand: taking care of Santa Clara.

Cam Brown got the start on the mound for the Frogs and had control issues throughout his outing. Brown walked three and hit a batter, allowing three runs in 3 1/3 innings pitched before being pulled in the fourth inning. Brett Walker (5-2) came on in relief and pitched well, earning his fifth win of the season and a nod from the skipper after the game.

“He’s the change of pace guy, strike thrower,” Saarloos said. “He did a good job of pitching in, just good pitches when it mattered.”

Trailing 3-1 in the fourth, TCU loaded the bases with no outs. Porter Brown worked a walk, driving in a run for his 16th RBI of the season and 11th in the last three games. One batter later, Nunez grounded out to first base, allowing the tying run to score.

Santa Clara retook the lead in the sixth inning with a one out sacrifice fly, but the Frogs didn’t allow that lead to last long. A four run bottom of the sixth solidified TCU’s lead at 7-4. Nunez drove in his second run of the night with a single to center field, before Brayden Taylor walked to bring home a run. A ground ball to first off the bat of David Bishop pushed the final run of the night across for the Frogs, which turned out to be the game winner.

Nunez continued his high-quality game with a diving catch to end a scoring threat in the eighth inning. With runners on first and second, and Santa Clara already having scored in the inning, a soft line drive was hit to shallow center field. Nunez charged in and dove to make the catch, ending the threat and keeping TCU’s lead at 7-5.

Santa Clara homered in the ninth to make it a one-run ballgame, but Luke Savage induced a ground ball to Bishop to end the game, giving TCU a 7-6 win.

The win is the fifth in a row for TCU, who now sits at 33-18 on the year. The Frogs have had a roller coaster of a year, but Saarloos believes that has prepared them well for the postseason.

Now TCU tries to compartmentalize two more times, as they look to finish off the regular season on a winning streak, and as the outright Big 12 regular season champs.

One is very much in their control, one is not.