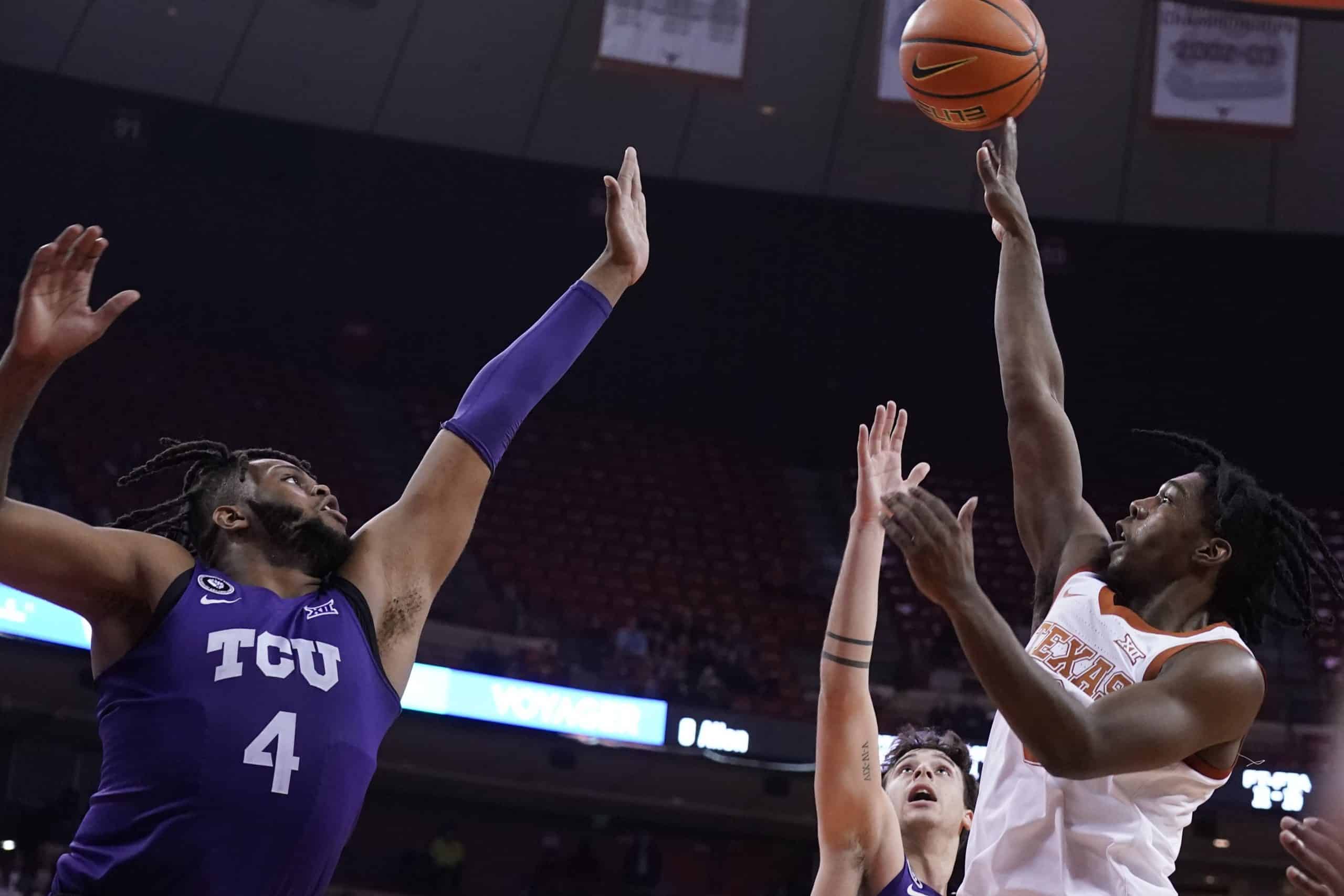 Marcus Carr is one of the veteran Texas players who gave Eddie Lampkin Jr. and TCU fits last month (The Associated Press/Chuck Burton).

When asked Monday if his team, the TCU Horned Frogs, have done enough to make the NCAA Tournament, coach Jamie Dixon didn’t hesitate.

“You finish fifth the best league in the country, that pretty much speaks for itself almost,” he said.

The Frogs did finish fifth in the Big 12, albeit with an 8-10 record, but TCU scored six Quadrant 1 victories this season and among those are wins over Texas Tech and Kansas. All three main bracketology gurus have the Frogs in the field of 64.

First up, though, is the Big 12 tournament. The fifth-seeded Frogs play the fourth-seeded Texas Longhorns for the third time this season and are looking to avoid getting beaten three times by their rivals in Austin.

The key in the first two matchups was on the glass. Texas won the rebounding battle against one of the country’s best rebounding teams.

TCU knows that can’t happen again if it expects to upset the No. 22 team in the Associated Press poll.

“We know what we’ve got to do, and that’s always our emphasis and certainly remains so,” Dixon said. “We know the numbers, and we’re well aware.”

About TCU: The Horned Frogs are coming off back-to-back road losses to Kansas and West Virginia to end the regular season. Those games concluded a stretch of seven games in 14 days, and the Frogs admitted to being fatigued and bruised entering the trip. … Guard Mike Miles Jr. was selected to the All-Big 12 second team by both the conference’s coaches and the Associated Press. He averaged a team-leading 15.1 points per game and was the only Big 12 players to rank in the top six in scoring (fifth) and assists (fourth, 4.0). Miles is also one of five players in Power 5 conferences who averaged at least 15 points, 4.0 assists and 3.5 rebounds. … Damion Baugh and Emanuel Miller, who transferred to TCU before the season, were selected at All-Big 12 honorable mentions. … Watch out today for another transfer, Micah Peavy. His defensive points per possession is 0.5, which ranks in the top percentile in the country. He also had 12 points Saturday at West Virginia.

About Texas: The Longhorns are coming off a 70-63 overtime loss Saturday at Kansas in their season finale. Senior forward Timmy Allen had a miserable shooting game making only two of his 15 attempts. It was contagious, though, as Texas shot only 33.9%. … The Longhorns could be susceptible inside. Kansas big man David McCormick scored 22 points, including making all 10 of his free throws. However, Texas managed to pin down Eddie Lampkin Jr. and Emanuel Miller, TCU’s best inside threats, with foul trouble in the matchup last month in Austin. … Texas has won seven straight in the series. Coach Chris Beard is 9-2 head to head against TCU coach Jamie Dixon.