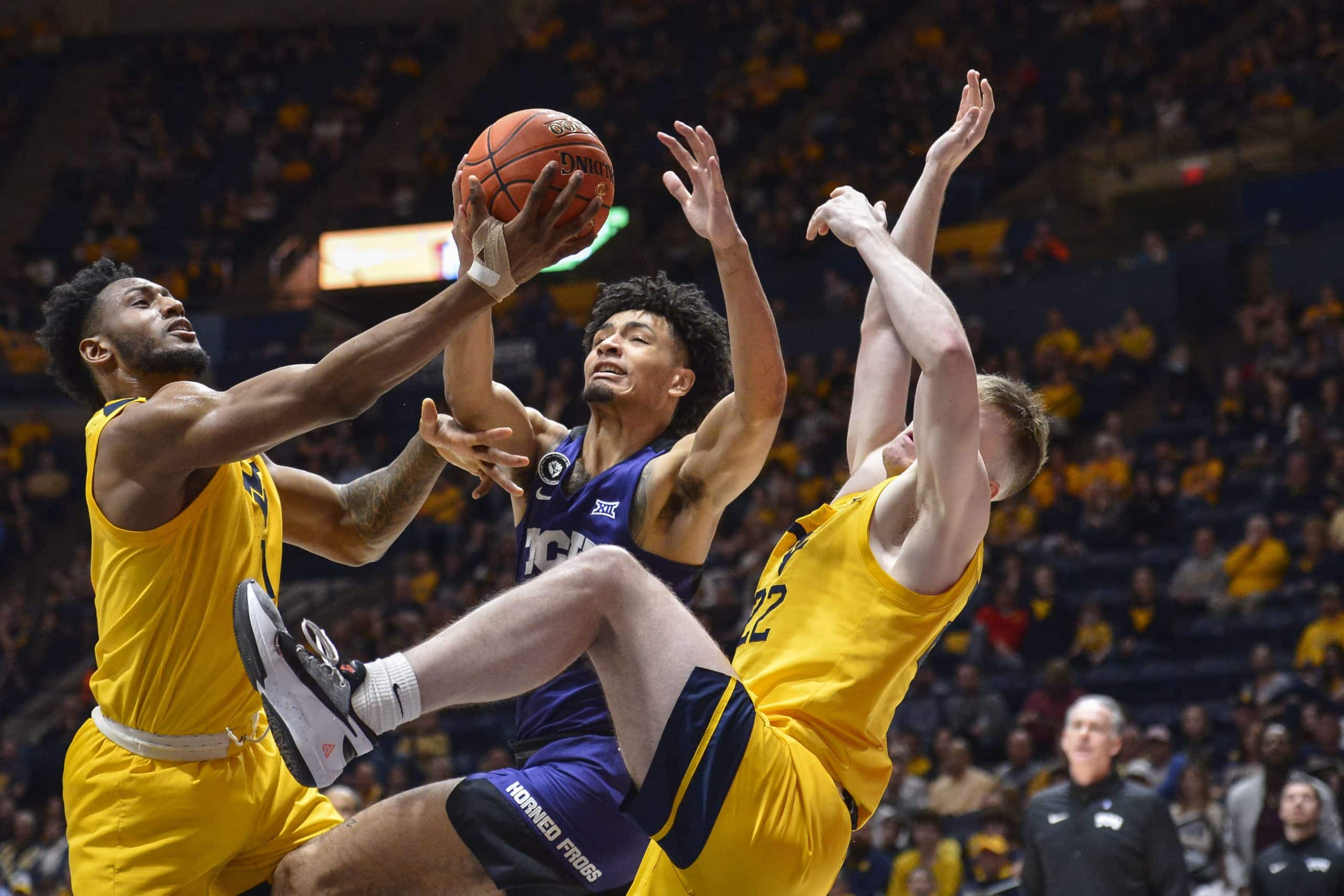 Playing their fourth game in the past seven days, the TCU men looked like a tired team Saturday against last-place West Virginia in Morgantown.

The Mountaineers, playing on Senior Day, came out hot, looking anything but like a team that had lost seven straight and 14 of 15.

That losing streak is over.

Led by Taz Sherman, West Virginia led by as many as 11 in the first half and finished the game on a 17-5 run to beat the Horned Frogs 70-64 in the regular-season finale for both teams.

Next up is the Big 12 tournament. The Frogs are seeded fifth and will play fourth-seeded Texas on Thursday morning in Kansas City.

“Everybody’s banged up in the conference at this point,” TCU coach Jamie Dixon said. “We know we play Thursday. We will watch film and reevaluate ourselves. This wasn’t the team I wanted to bring here today.”

Sherman was outscoring the entirety of the TCU roster for much of the first 10 minutes, as he was up to double digits ahead of the Frogs. Struggling on both ends of the floor, the tired legs of TCU led to poor rotation on defense and even poorer shot selection on offense. But the Frogs were able to hang around, staying within single-digits for most of the first 20 minutes of play, and within striking distance of a team not known for its efficient offense.

An 8-0 run toward the end of the the first half cut the Mountaineers’ lead to 30-28. Chuck O’Bannon Jr., Mike Miles Jr. and Francisco Farabello connected on shots during the run. The Mountaineers created some breathing room thanks to a late flurry of their own, taking a 39-33 advantage into the break.

The Frogs were fortunate to be even that close, as West Virginia held a 21-14 rebounding advantage — including 10-2 on the offensive glass — and were gifted eight TCU turnovers in the first 20 minutes.

The Frogs would not go quietly, though.

After Sherman connected early in the second half to make it an eight-point game, TCU scored the next seven points during a run that was punctuated with a beautiful full-court pass from Eddie Lampkin Jr. to Micah Peavy.

That’s when one of several pivotal moments of the game occurred.

After the Peavy layup, Lampkin was caught chirping at the West Virginia bench and whistled for a technical foul as chants of “Eddie sucks” rained down from the crowd. The ensuing two free throws kicked off a 6-0 run by the Mountaineers, a run that would push the lead back to seven. But Peavy would help get much of that back when his steal led to an intentional foul that turned into four TCU points and a 47-44 ballgame.

After Sean McNeil connected on a jumper for the Mountaineers and Damion Baugh answered with a three-point play, three straight unforced turnovers halted the Frogs’ momentum. The poor decision-making haunted TCU all day.

“We got stops, so we should have had some opportunities to get to the basket better,” Dixon said. “But some of the passes were just unexplainable and the turnovers devastating.”

TCU would finish with 18 turnover, and yet still had a chance.

Miles tied the game at 51 when he connected on a jumper with just under 11 minutes to play, and Baugh gave his team its first lead of the game when he went for back-to-back coast-to-coast layups in just a 14-second span. The lead grew to six after a Miles jumper, but that the Frogs’ last field goal for the Frogs until only the final seconds of the game.

Over a six-minute stretch the Mountaineers outscored TCU 15-2 as the Frogs committed more careless turnovers and got stagnant on the offensive end.

“We made so many mistakes in transition opportunities we didn’t convert on,” Dixon said. “Playing without the basketball was something we really preached, but I don’t know if I preached it enough. We didn’t respond. Our cuts weren’t crisp enough, there was no deception.”

Dixon was quick to give West Virginia credit for how hard it played and the energy on Senior Day. He pointed to the amount of offensive fouls they drew (a solid handful) and how physical they were.

While Dixon admitted his team was tired after seven games in 14 days and four in the last seven, he said “you can come up with an excuse, but nobody is going to buy it.”

Sherman finished with a game-high 25 points for the Mountaineers, who had four players in double figures. Miles led TCU with 17 points but struggled from the field, connecting on just two of his eight 3-point attempts and getting to the free-throw line just once.Baugh and Peavy added 12 points each.

TCU dominated the paint, outscoring West Virginia 32-24 inside, but lost the rebounding battle 33-29 and had just nine assists on the day.

Now they will have a much-needed break ahead of Big 12 tournament, likely against the Texas Longhorns on Thursday.