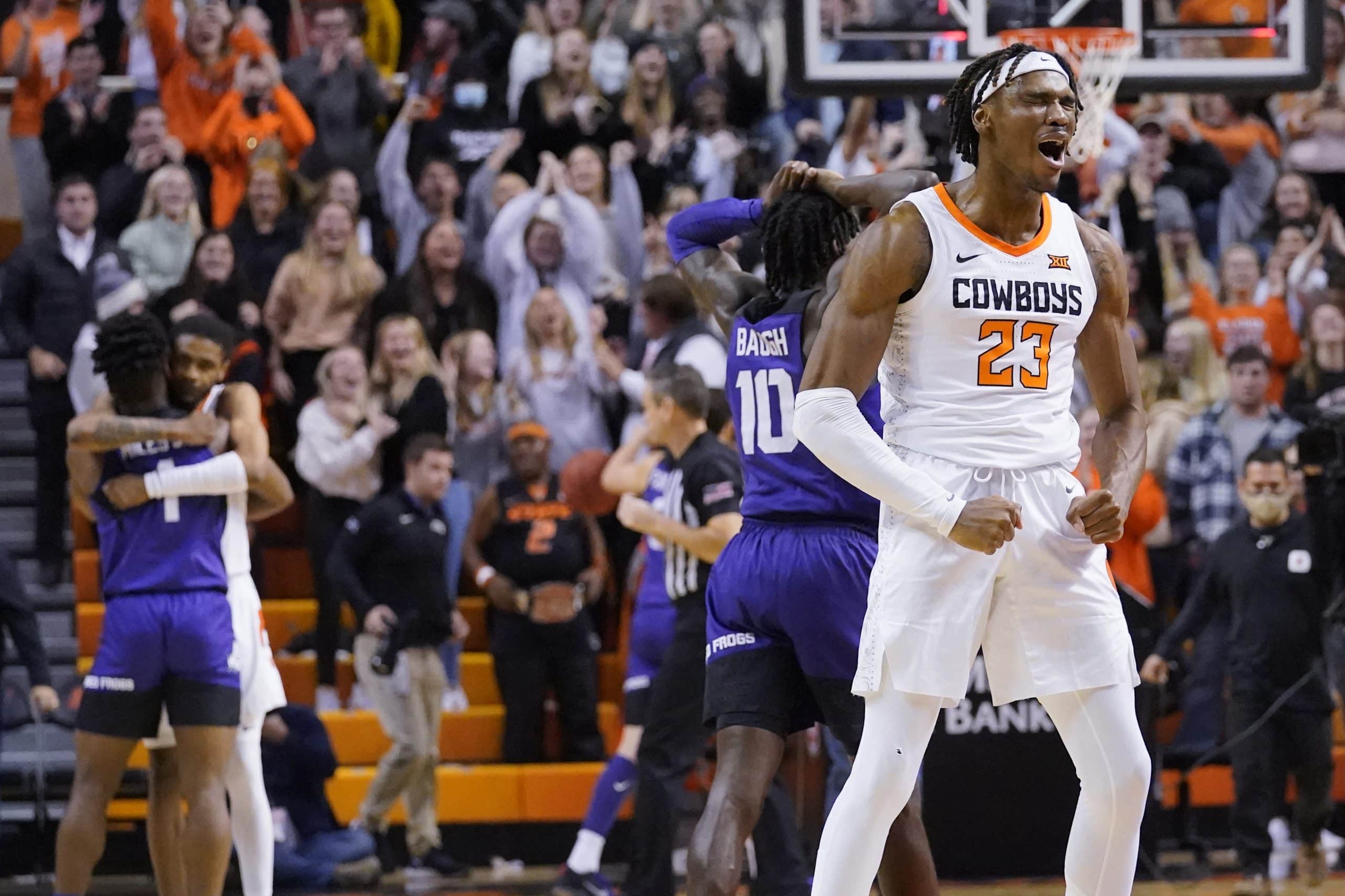 Oklahoma State forward Tyreek Smith celebrates after the Cowboys rallied past TCU for a 57-56 victory. (The Associated Press/Sue Ogrocki)

STILLWATER, Okla. — Jamie Dixon had two choices for his postgame press conference Wednesday night, and neither one of them was good.

The TCU men’s coach could talk about the nine-point lead with 3:16 to play that he watched waste away or the 22 turnovers the Horned Frogs committed in a game they nonetheless led for nearly 29 of the 40 minutes.

A team can’t let a late lead slip away, especially on the road, and it can’t commit 20-something turnovers and expect to win, especially in the Big 12 Conference.

Rondel Walker sank two free throws with 4.8 seconds left to cap a 7-0 game-ending run for Oklahoma State, which survived Damion Baugh’s 3-point try at the buzzer for a 57-56 victory that kept the Frogs from a third straight victory.

“We’ll talk about the six-point lead with a minute left, but really the reality is we turned it over 22 times and that put us in the situation where we’re at,” Dixon said. “We really talked about these things and talked about things that we need to be better at, and those things we didn’t get better at.”

Dixon preached turnovers after TCU’s Big 12-opening loss to Baylor, and even as the Frogs survived a bevy of them to beat Kansas State and Oklahoma. Their defense gave them a chance, as Oklahoma State converted the turnovers into only 10 points.

But that was too much damage in a close game.

Chuck O’Bannon Jr. led TCU  (12-3, 2-2) with 13 points and Francisco Farabello came off the bench to score 12 as the Frogs again tried to cope offensively as leading scorer Mike Miles Jr. struggled. He was held scoreless in the first half and didn’t make his first bucket until 10:05 remained.

But he sank two 3-pointers to help TCU stretch its lead, and an O’Bannon dunk made it 54-45 with just over three minutes to go. TCU would score only two more points, on Farabello free throws for the six-point lead with 1:33 to go.

“At that point you’ve just got to play smart basketball,” O’Bannon said. “I believe they finished the game on a 7-0 run. We can’t have that up six  on the road. It’s unacceptable.”

Oklahoma State, one of the worst 3-point shooting teams in the country, hit two 3s in the final three minutes. Walker drained one following an offensive rebound to cut the TCU lead to 56-55 with 31 seconds left.

Following a timeout, TCU broke the Cowboys’ press and had a 2-on-1 fast break. O’Bannon passed underneath to JaKobe Coles, whose shot was blocked and tracked down by Walker in a scramble near the sideline.

“You’ve got to make the play,” Dixon said. “You’ve to go come up with the ball.”

Walker drove to the basket, and Miles was called for a blocking foul underneath.

Dixon talked afterward about some questionable decision-making down the stretch, and the O’Bannon-to-Coles pass might have been on his mind. Had O’Bannon slowed the pace, Oklahoma State (10-7, 3-3) would have been forced to foul to get the ball back.

TCU committed 13 first-half turnovers and shot only 33.3%, but led 25-20 at halftime in part because of 10 more rebounds, holding the Cowboys to 26.9% shooting and forcing nine turnovers. Oklahoma State managed only six points off the TCU miscues.

Farabello came off the bench to lead all scorers in the first half with eight points, including hitting both of his 3-point tries.