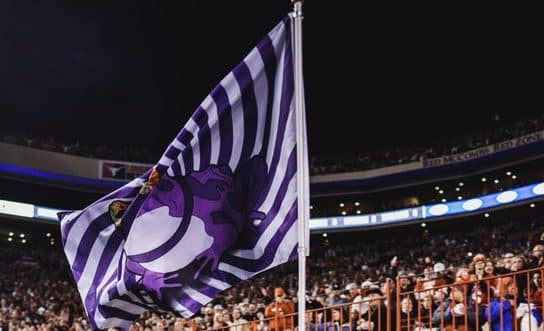 TCU stays at No. 4 in College Football Playoff rankings

By Jamie PlunkettNovember 15, 2022No Comments

Home » TCU stays at No. 4 in College Football Playoff rankings

TCU finds itself in the top four of the College Football Playoff rankings for the second consecutive week, after the committee released it’s updated rankings Tuesday night.

The Horned Frogs sit at No. 4, exactly where they were a week ago, following their 17-10 win over Texas on Saturday night. The Frogs and Longhorns were the second-most viewed college football game of the weekend, drawing five million viewers.

“You’re looking for improvement over the course of the year,” committee chairman Boo Corrigan said. “For their defense to give up three points … as you look at the whole package they continue to improve and earn the opportunity to be in the top four, and we have them in the top four.”

TCU is joined by Big 12 bunkmates Kansas State at No. 15 and Oklahoma State at No. 21, giving the Frogs wins over two ranked opponents. Texas, who was No. 18 in last week’s rankings, fell out of the top 25 after the Frogs handed them their fourth loss of the season.

Central Florida now leads the Group of 5 race after a win Saturday over Tulane. The Knights are now in line for a New Year’s Six bowl should they stay the highest ranked G5 school in the final rankings.

Meanwhile, the top of the rankings stayed the same with Georgia and Ohio State holding on to the No. 1 and No. 2 spots. Michigan stood pat at No. 3, despite the Wolverines having an arguably weaker resume than the Frogs to this point.

Tennessee holds on to the No. 5 spot, while LSU is at No. 6. USC is the highest-ranked Pac-12 team at No. 7, and seems to be the lone remaining hope for the Pac-12 to reach the playoffs.

Alabama, Clemson and Utah round out the top 10. The Crimson Tide is ranked ahead of one-loss Clemson despite having two losses, something the pundits were critical about Tuesday night.

“I don’t understand that,” ESPN’s David Pollack said. “Clemson should be ahead of them.”