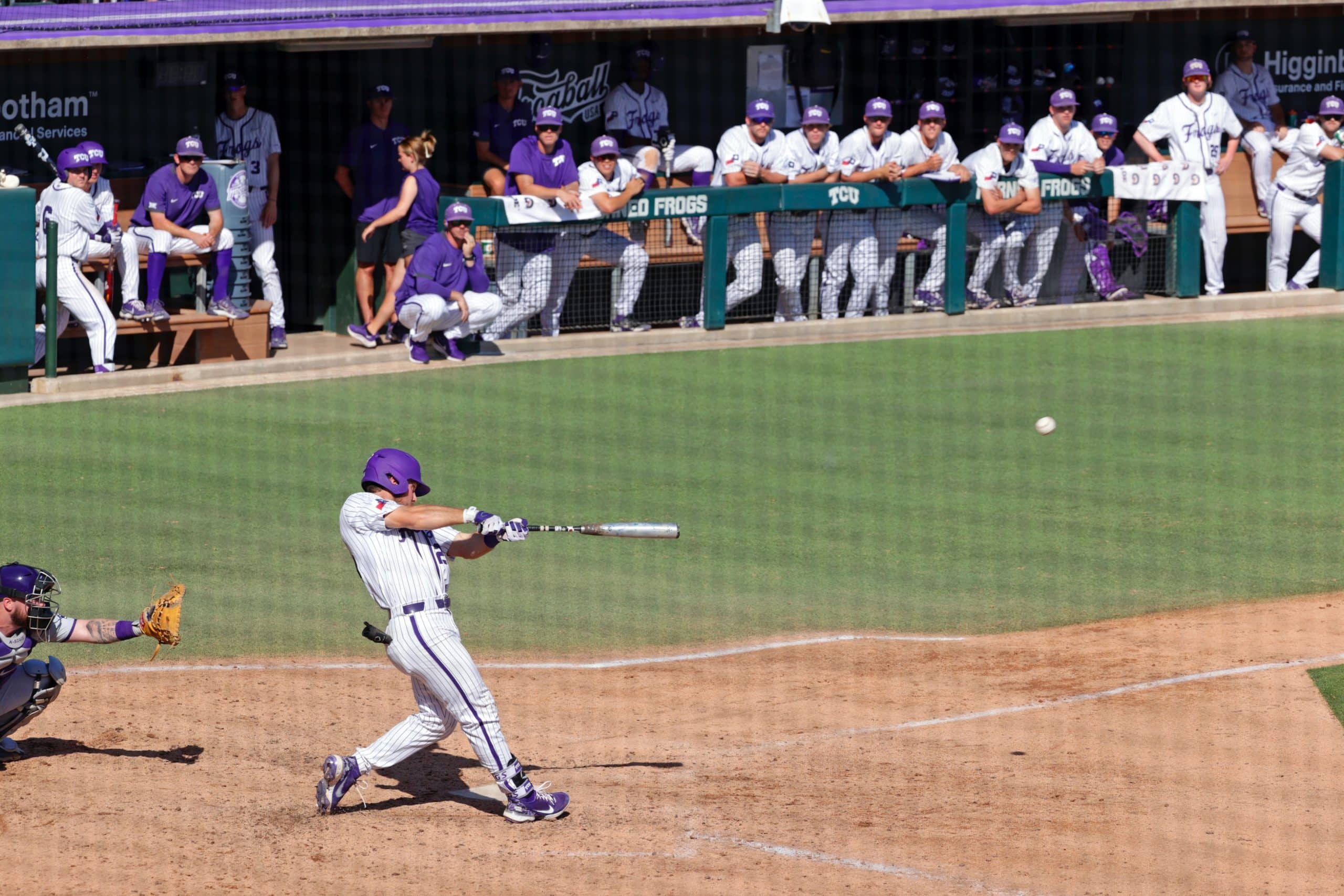 By Melissa TriebwasserMarch 26, 2022No Comments

Tommy Sacco connects for one of his two home runs Saturday as TCU charged past Kansas State (TCU baseball).

You don’t often see teams score eight runs in a single inning on only three hits, but that’s what TCU did Saturday.

You also don’t see players hit two home runs, including a grand slam, but that’s what Tommy Sacco did.

He cleared the bases TCU drew six of its 11 walks in the bottom of the sixth en route to a 14-5 victory over Kansas State. The Wildcasts worked through four different pitchers in the sixth, and the Horned Frogs sent 13 batters to the plate to take their first lead of the game.

Things started well enough for the Wildcats, who jumped out to an early 2-0 lead and chased starter Cam Brown after only three innings. Brown walked four and didn’t record a strikeout, allowing three runs (two earned) on three hits.

The Frogs fought back, though, tying the game in the third thanks to  hits by Porter Brown and Elijah Nunez, walks to Brayden Taylor and David Bishop, and a sac fly from Sacco.

Sacco was just getting started.

On a day when TCU basketball made an appearance to sign autographs and meet with fans and Eddie Lampkin threw out the first pitch and generally held court, Sacco still managed to be the brightest star.

After the Cats put up three in the top of the fourth to go back on top, Sacco cut the lead to 5-3 with a two-out solo homer to right center. Logan Maxwell’s double brought home Kurtis Byrne and Luke Boyers, tying the game at 5.

But it was Sacco again who provided the big hit, a grand slam that put TCU on top for the first time in the sixth with a rocket that cleared the right-field fence  in an instant.

The inning started with a walk to Taylor, who drew three free passes on the day. Bishop singled and Gray Rodgers walked on four pitches to load the bases for Sacco. TCU quickly loaded the bases again, as Bryne lined a base hit to left and Boyers and Maxwell drew back-to-back walks. Nunez and Taylor walked to bring home two more, and an error on Bishop’s one-out fly ball made it 12-5.  Rodgers completed the wild frame with a sac fly, making it 13-5.

Byrne launched a solo shot in the seventh.

Tommy Vail, Connor Oliver and Drew Hill — making his first appearance of the season — provided solid relief out of the bullpen to lock up the win. Cohen Feser allowed two runs on four hits across two innings in relief of Brown to keep TCU within striking distance.

The win was the first for Vail as a Frog and Hill looked solid in his first action in nearly a year, striking out two in the ninth.

The win, TCU’s third in a row, ensures their second Big 12 Conference series win of the young league season.

The Horned Frogs are in great shape for their first Big 12 series sweep of the season, with Wildcats coach Pete Hughes using five pitchers Saturday after using four Friday night.

The Frogs are expected to start Brett Walker in the Sunday finale.