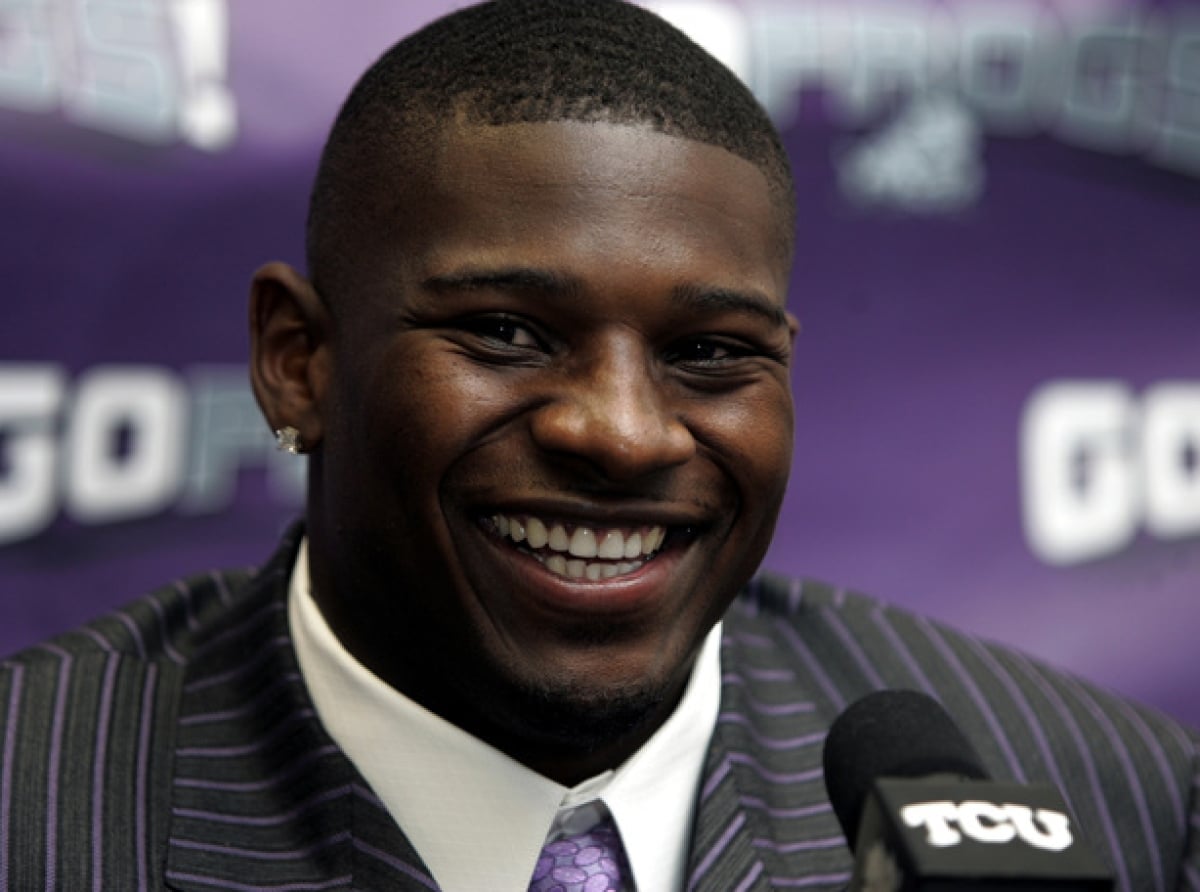 Who was the first opponent in TCU football history?

The correct answer, obviously, is D. Toby’s businessmen fought hard that day in 1896, but the Horned Frogs prevailed 8-6. Then, the Houston Heavyweights set the Frogs straight 22-0 before a return game in Fort Worth that ended in a scoreless tie.

But the star of that era was Sam Baugh, who, with Lester and Jimmy Lawrence, took the Frogs to the national championship in 1935. Davey O’Brien won the fourth Heisman Trophy in 1938 and guided the Frogs to another national title along with fellow All-Americans Ki Aldrich and I.B. Hale.

TCU hasn’t won a national title since despite some serious talent that has come and gone at Amon G. Carter Stadium.

A little book I penned a few years ago, Purple Passion: TCU Football Legends, tried to sort out the 10 most influential people in program history. Gary Patterson topped the list and was one of three coaches who did something special to raise the profile of the Frogs.

The seven players in that book are bound to be on this list, but not necessarily in the order they appeared in the book. Is quarterback Andy Dalton the third-best player in program history or should O’Brien and Bob Lilly leap ahead of him?

Roxo Sports is about to sort it all out, according to us. Perhaps you disagree, which won’t hurt our feelings. Let us know in the comments section (keep in mind this is a family publication). A great cornerback doesn’t necessarily pile up interceptions and other statistics because opposing teams are afraid to throw anywhere near him. That’s the case with Verrett, who was a first-team All-American in 2013 (Walter Camp), the Big 12 Conference Co-Defensive Player of the Year, and first-round pick (25th overall) in the 2014 NFL Draft. Verrett led the nation over his final two seasons with 38 passes defended, including eight interceptions. TCU opened up its offensive playbook in 2014, and Doctson was one of the primary beneficiaries. Long, physical and fast, Doctson finished his three seasons at TCU (after transferring from Wyoming) with school records in receiving yards (2,785) and touchdown catches (29). His senior season in 2015 was his best, as he caught 79 passes for 1,327 yards and 14 TDs. All three of those are single-season TCU records. It took more than 70 years for TCU to get its second two-time consensus All-American. It was Hughes, a former tailback who collected 26.5 sacks and 34.5 tackles for loss over his final two seasons. (The first two-time consensus All-American was Darrell Lester in 1934 and 1935). Hughes led the nation with 15 sacks as a junior to help TCU to a 12-0 record before losing in the 2010 Fiesta Bowl. Hughes won the Lott Award and Ted Hendricks Award as a senior. After moving around the offense his first few seasons at TCU, Boykin settled in at quarterback in 2014 and guided the first to their only Big 12 Conference title. He finished fourth in Heisman balloting that season, the highest finish by a TCU player since LaDainian Tomlinson finished fourth in 2000. Boykin tossed for a school-record 10,728 yards in his four seasons, and went 22-3 in his final two seasons. The only all-time TCU passing statistic Dalton doesn’t hold is passing yards, where his 10,314 yards fall 414 short of Trevone Boykin’s mark. But the big one is victories, and Dalton finished with 42 of them as a four-year starter. His biggest victory was the 2011 Rose Bowl, when the Frogs topped Wisconsin 21-19 to finish 13-0 and as the No. 2 team in the country. Dalton could run a bit, too, finishing with 1,611 yards in his TCU career. He made his name as “Mr. Cowboy” on the Dallas Cowboys teams of the 1960s and 1970s, but Lilly was the driving force behind defensive-minded TCU teams that won the Southwest Conference in 1958 and 1959, and Lilly was an All-American in 1960. The Frogs allowed only eight points a game during Lilly’s three seasons, and he caught the eyes of the Cowboys and became the franchise’s first draft pick in 1961. At a time when TCU football was looking to recapture its national status from the 1930s, along came Swink from the East Texas town of Rusk. The Rusk Rambler bolted onto the scene in 1954 and piled up 2,618 yards in three seasons, including an NCAA-leading 1,283 yards in 1955. He also led in points (125) and finished second in Heisman Trophy voting. Swink gained 504 years in three games vs. Texas including 235 on 15 carries in 1955. He starred in a bygone area as an undersized quarterback (5-foot-7, 150 pounds) from Dallas who was also a deft runner, kick returner, kicker, punter and defensive back. “Little Davey” made his greatest impact throwing the ball in coach Dutch Meyer’s passing attack, leading the nation in 1937 and 1938. He was also the NCAA leader in total yards in ‘38, when he led the Frogs to the national championship and claimed the Heisman. LT is the most recognizable player in TCU history, thanks to his 406-yard game in 1999 and an NFL career that put him in the Pro Football Hall of Fame. Before he reached the NFL, he charged for a school-record 5,263 yards and 54 touchdowns at TCU. He owns the top four single-game rushing days in school history. He gained 2,158 yards and scored 22 TDs in his senior season in 2000. All Baugh did while in college and later in the NFL was revolutionize football. As the chief weapon in Dutch Meyer’s double-wing offense, Baugh threw like no other quarterback from 1934-1936, including in 1935 as he led TCU to the national championship. He went 29-7-2 at TCU and threw for 3,384 and 40 touchdowns. That might not even win the Heisman Trophy today, but the modern passing game started with Baugh.