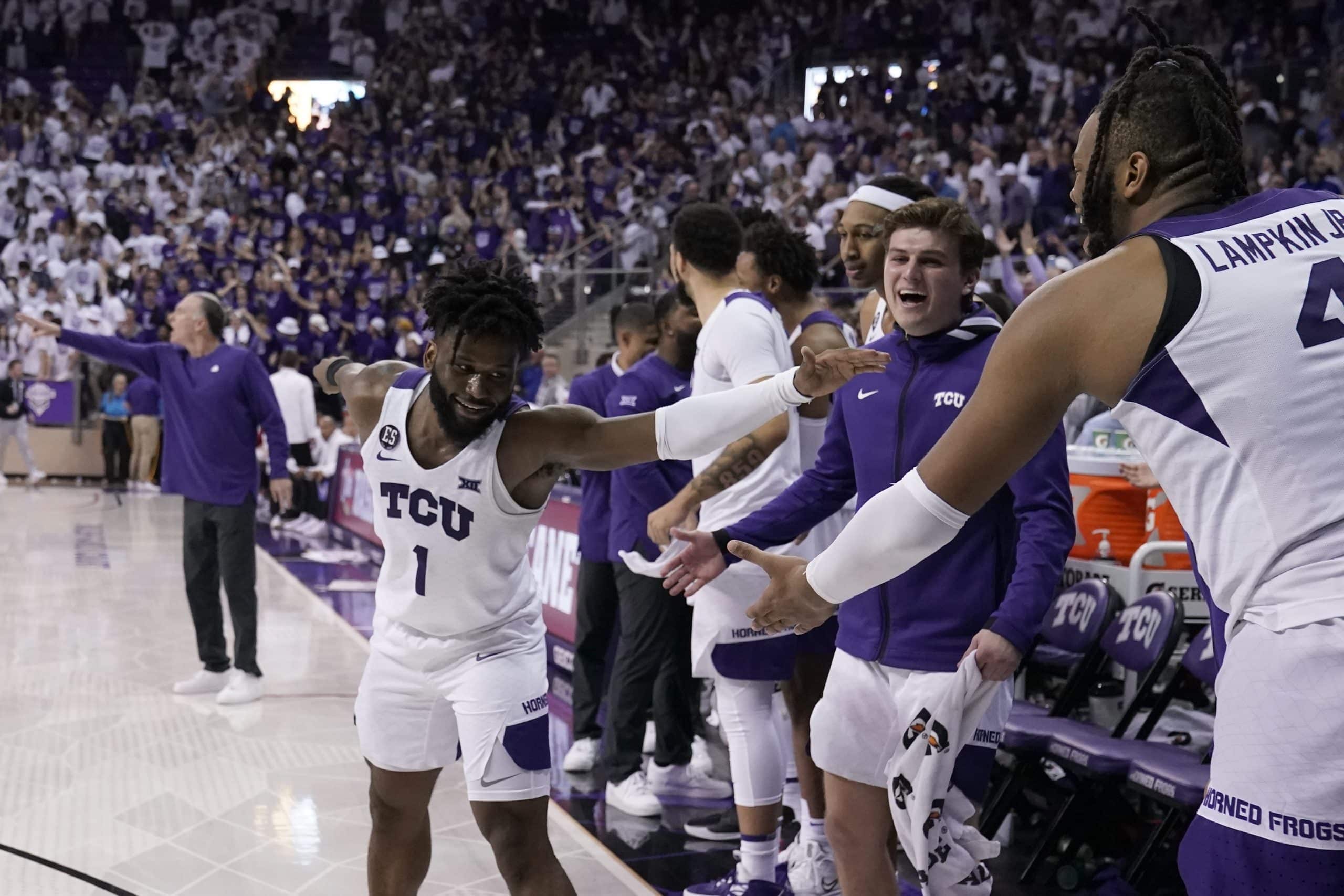 Another stunner, this one over Kansas, should leave no question about TCU’s NCAA Tournament fate

Home » Another stunner, this one over Kansas, should leave no question about TCU’s NCAA Tournament fate

TCU guard Mike Miles, center Eddie Lampkin Jr. and the rest of the bench celebrate in the final seconds of an upset win over Kansas (The Associated Press/Tony Gutierrez).

Reality can be an SOB, and the reality a week ago was that TCU needed a miracle.

Maybe miracle is a strong word, but the Horned Frogs were sitting on six Big 12 wins with four games left and needed to reach eight to grab the attention of the NCAA Tournament committee.

Their four games were against then-No. 9 Texas Tech, a home-and-home against No. 6 Kansas and the finale at West Virginia. TCU has never won at Kansas nor at West Virginia, and the Frogs had never beaten ranked teams, let alone top-10 teams, in consecutive games.

But TCU has done the improbable, and in short order. The Frogs stunned Kansas on Tuesday night, 74-64, in an encore to their Saturday upset of Texas Tech.

TCU entered Tuesday projected to be a No. 9 seed by ESPN’s Joe Lunardi, NCAA.com’s Andy Katz and Jerry Palm of CBS Sports. The Frogs were one of the last four in the field as recently as Saturday morning.

They had blown a double-digit second-half lead at Texas last Wednesday, losing 75-66, for their fourth loss in five games. Included in that stretch was TCU scoring scored 51 points (total!) in a home loss to Iowa State, which doesn’t look quite as bad thanks to the Cyclones’ late-season surge.

But it looked pretty awful at the time, and the Frogs looked worn down after Texas game.

They played arguably their best half of the season, limiting the Red Raiders to 25 points and forcing 13 turnovers. Mike Miles Jr. had his best game of the season with a game-high 26 points and five steals.

He was good again against Kansas, which was fortunate to be up 36-35 at halftime. But TCU regained control in the second half, leading by as many as 12, and Damion Baugh iced the game from the free-throw line in the final minute.

Jamie Dixon didn’t particularly care for the first 10 minutes of the game, but the Frogs’ coach liked other 75%. He also liked the shiniest number TCU has posted in conference play — only seven turnovers.

That, a decisive edge in rebounding (47-35) and solid defense (37.1% shooting, seven blocks) are the key components to a Frogs victory.

“I told them it wasn’t about making shots. It’s about taking care of the basketball and rebounding,” Dixon said.  “It’s possessions, possessions, possessions, and that’s what we’ve done the last couple of games.”
A productive Miles is critical offensively. That doesn’t simply means points — he finished with a game-high 19 — but smart decisions. He added six assists and committed only two turnovers, and he has learned how to play with pain in both of his wrists.
It’s March now, and this is the time when players and teams have to really grind.
The Frogs have been short-handed pretty much all season but especially in conference play. Their best players are soaking up minutes but still finding a way.
“We’re still the underdogs no matter who we beat,” Miles said. “That’s just our mindset going into these last few games and going into the tournament.”
A win in one of the final two regular-season games and a W in the conference tournament would only improve the Frogs’ seeding for the NCAA Tournament.
They should be in. They needed a miracle, and got one.
“We’ve got to beat these teams,” Dixon said. “We’ve got to win at home. I’ve been saying that, and we’ve been doing enough. We’ve had a lot of big wins, but we need more. That’s what we’ve got to keep doing. This group’s just got to keep getting better.”
Jeff Wilson, jeff@frogstoday.com