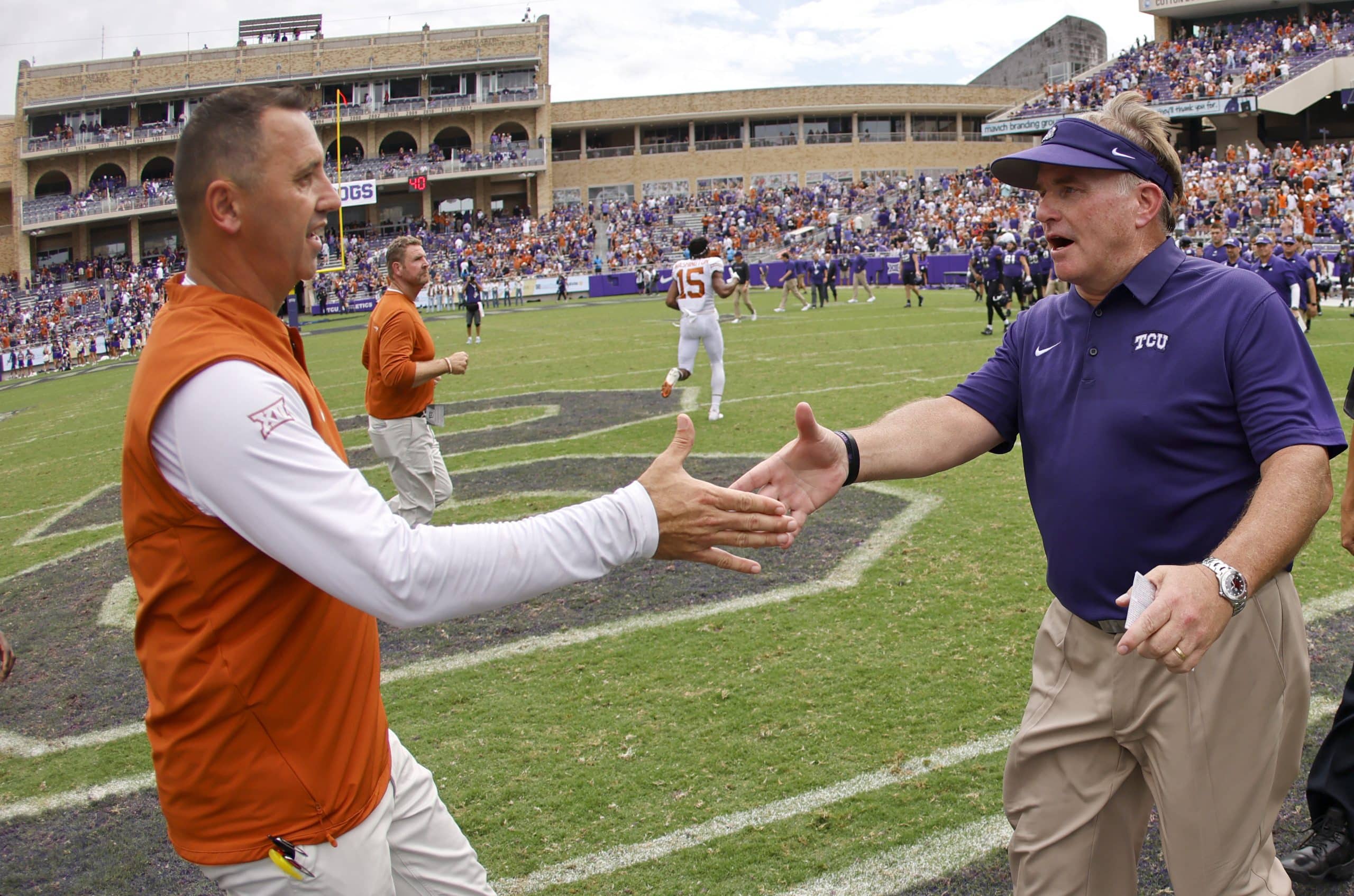 Frogs Today weekly newsletter: Now that he has a new job, Gary Patterson needs to stop worrying about what’s happening at TCU

Home » Frogs Today weekly newsletter: Now that he has a new job, Gary Patterson needs to stop worrying about what’s happening at TCU

FORT WORTH — The powers that be at Frogs Today haven’t formally discussed editorial policies, but it’s probably safe to say that there won’t be too much written about Texas Longhorns football.

That might be not be the smartest move, with the Longhorns potentially moving the needle in clicks and ad revenue, but this isn’t a local newspaper that cares about web hits more than staying true to who it is.

Alas, the biggest news in the week that was in Big 12 Conference football has forced our hands. Of course, there’s a very significant TCU tie-in in play here.

Former Horned Frogs coach Gary Patterson is now a University of Texas employee as special assistant to coach Steve Sarkisian. Many already believe that Patterson will be running the defense after the Longhorns’ first stinker, which will come in Week 2 against Alabama.

It makes sense that Patterson chose Texas. He and athletic director Chris del Conte are tight from their TCU days, Texas could give Patterson the visibility he needs if he wants to be a head coach again, and it rates as a big middle finger to Frogs athletic director Jeremiah Donati.

Some might say it takes someone with a big ego who is worried about someone else overtaking him as the best coach in TCU history to pull such a stunt, and they might be right.

There are those out there who believe that Patterson was in no rush to help the Frogs attempt to keep running back Zach Evans or defensive end Ochaun Mathis from leaving via the transfer portal. Patterson has been keeping tabs on what has been written about him and the new regime of coach Sonny Dykes, and responding when he doesn’t believe the narrative is quite right.

Here’s some free advice: Stop worrying about it.

Patterson’s legacy is cemented. He is the best coach in TCU history, and no one has had as much influence on the program and school as he has. Don’t believe me? Read all about it in Purple Passion: TCU Football Legends. Let’s get that baby to a second printing.

Seriously. It would take Dykes or whoever follows to win a national title, and that might not even do it if the success he sustains can’t match what Patterson did.

Maybe Patterson has some personal goals he wants to accomplish, like 200 coaching victories (he’s at 181), though that .696 winning percentage looks pretty shiny. A national title? Of course, but will a program capable of that give him a chance?

He’s been a football coach all his life, so it’s understandable that he wants to keep coaching rather sitting back on the small financial fortune he has accumulated.

Not a chance. Right?

Sophomore guard Mike Miles Jr., the best player on the Frogs men’s team, hasn’t scored in double figures in three straight games. He scored only five points Saturday in the 15-point win at Iowa State, which prompted a well-known DFW personality to say that TCU won despite a “no-show” from Miles.

Miles played well, frequently facing two defenders, and did the one thing that TCU needed, not just from him but from everyone — he didn’t turn the ball over.

Coach Jamie Dixon didn’t want to celebrate the 15 turnovers that TCU committed, but it was their low in conference play. They had only five in the first half as they built an 11-point lead.

Dixon said that Miles’ shooting is out of rhythm, and the guess here is that his right wrist is still hurting from the Baylor game.

As long as others are picking up the scoring and Miles is contributing in other ways, the Frogs can get by. They are 2-1 when he is held below 10 points.

But the Frogs do need Miles to find his scoring touch again.

The spring sports are kicking things into gear and will be really busy this weekend. If it’s home events you like, there is plenty for you to go watch.

You guys are going to keep seeing this friendly reminder until we’re running at full speed. Our goal is to get more readers to sign up for emails, which is another way, and perhaps the best way, to spread our word. Once again, if prompted for your email address, go ahead and sign up for free.

Frogs Today will require a subscription for most content in the not-to-distant future. You won’t be blindsided.

Some more tips: Follow Frogs Today on Twitter and me, too. I also cover the Texas Rangers, so you’ll get a good dose of baseball news. Frogs Today is up on Facebook, Instagram and YouTube, which is going to be a big player for us very soon.

That’s it … until next week.

Only one take needed: Seven Springs is a ski resort in Pennsylvania, where the snow has been falling and icing up staircases. The star of the update below isn’t Abbey Way, who apparently had no idea what was happening behind her. The person working the camera apparently didn’t, either. Maybe this was staged, but it’s pretty funny.

The fiercest linebacker on Twitter: If you’re like me whenever you seen an aging celebrity randomly trending on Twitter, your first thought is that the celebrity died. That was the case late last week when Dick Butkus was suddenly trending.

It turns out that he was finally verified on Twitter and was celebrating it with a tweet barrage that included hitting people with words as hard as he hit on the football field. Many people were already following him, and now more than 100,000 are, too. Here’s one of his best from his Twitter heater Friday night.

Bad golf shots: There are many reasons to like this one, but I think my favorite part is the hubcap falling off.