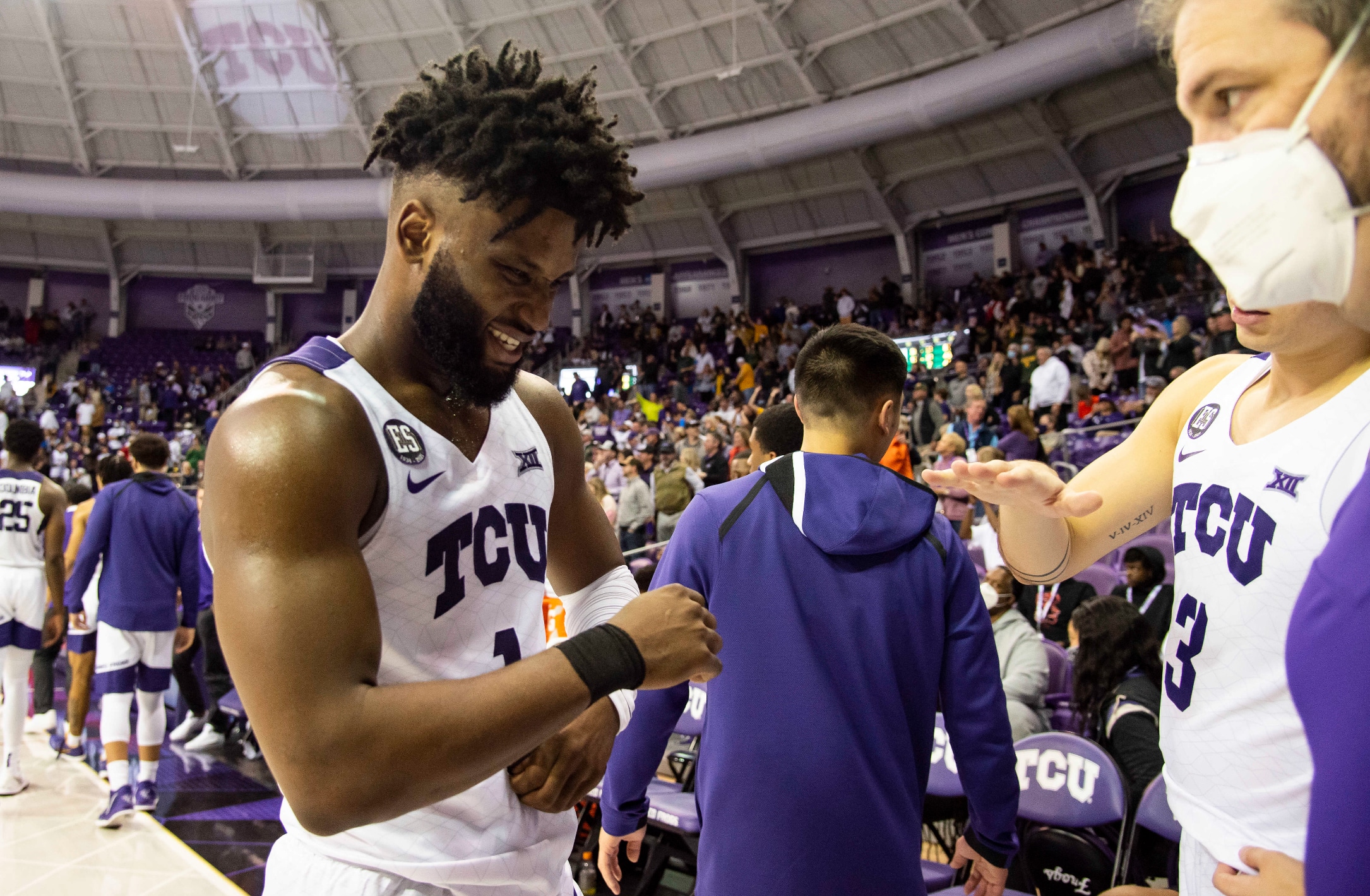 Mike Miles Jr. played the second half against Baylor with a sore right wrist but is expected play at Kansas State (The Associated Press/Emil Lippe).

FORT WORTH — TCU plays the road for the first time since last month Wednesday night in a gym where they have had plenty of recent success, and sophomore guard Mike Miles Jr. is expected to play after dodging a serious injury Saturday against Baylor.

The problem is that winning on the road in the Big 12 Conference might be more difficult than ever, though Texas Tech stunned No. 1 Baylor on Tuesday night in Waco.

Not even Kansas and Texas were immune from the road woes Saturday. So, even though the Horned Frogs have won as Kansas State the past two seasons, that doesn’t mean their trip to Bramlage Coliseum is going to be any easier.

The Frogs received a lesson against Baylor on what they must improve after an 18-day layoff because of a COVID-19 stoppage. Back at full strength, TCU had a chance to do so the past three days.

“None of those things aren’t things we can’t correct and can’t improve on, and we have to do that,” coach Jamie Dixon said. “Certainly, practice is the best way to do that.”

A healthy Miles helps, too. He scored a game-high 26 points against Baylor and had 22 points only 90 seconds into the second half. But he banged his wrist on a drive, immediately missed two free throws, and came out of the game. He wasn’t the same after returning, and neither were the Frogs.

X-rays taken Sunday were negative, and Miles practiced leading up to the Kansas State game.

He has scored in double figures in all 11 games he has played this season and is third in the conference in scoring (17.7 points per game).

About TCU: The Horned Frogs will be playing a true road game for only the second time this season and for the first time since winning at Georgetown on Dec. 18. TCU played two games in November in the SoCal Challenge, going 1-1 on a neutral court. … TCU leads the country in offensive rebounds (15.58 per game), is second in offensive rebound percentage (41.1%), is fourth in rebounding margine (11.9) and sixth in total rebounds (41.6 ppg). All four stats lead the conference. … TCU is 9-1 this season when outrebounding its opponent. … TCU is 3-2 at Kansas State under coach Jamie Dixon.

About Kansas State: The Wildcats have lost three straight but have one the past two games against TCU, including an easy 71-50 win last season in the Big 12 Tournament. … The Wildcats’ leading scorer is guard Nijel Pack, who averages 16.0 points (sixth in the Big 12). The sophomore has scored 20 and 21 points his past two games against Texas and West Virginia.  … While TCU leads the Big 12 in rebounding, Wildcats senior guard Mark Smith, at 6-foot-5, leads the conference with 8.4 rebounds per game.