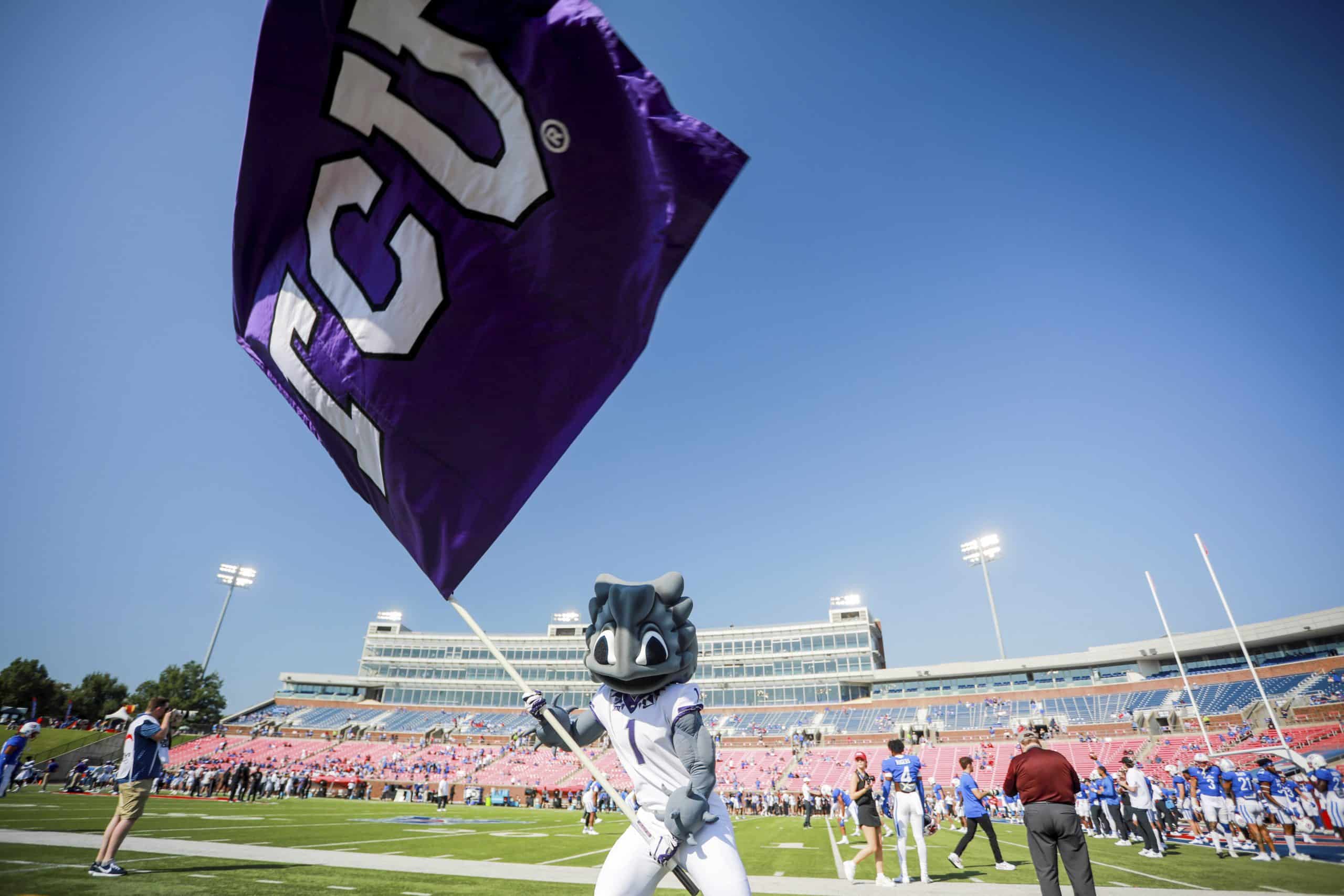 By Jeff WilsonSeptember 26, 2022No Comments

The TCU flag was flying high after 60 minutes Saturday at SMU (The Associated Press/Gareth Patterson).

FORT WORTH — A curious sight came into view Saturday morning about an hour before kickoff in Dallas.

Stretching and working with the TCU quarterbacks, in full pads, was Chandler Morris.

Anyone who watched closely could tell he wasn’t at full strength. During stretch, as others jumped and squatted, Morris stood still. But he went through the pregame throwing routine, and maybe, just maybe, gave SMU coaches pause that he was going to play despite being ruled out early in the week.

That was the extent of it, as Morris shed his pads and was in his jersey top, shorts and knee brace on the TCU sideline during the game. But it’s clear that Morris’ left knee is improving after it was sprained in the Sept. 2 season opener at Colorado.

What isn’t clear is if or when he will unseat Max Duggan as the starting quarterback.

It’s possible that Morris has been Wally Pipp’ed.

(For those who don’ know the infamous Pipp, the first baseman showed up to a New York Yankees game in 1925 with headache and asked for the day off. A young player named Lou Gehrig was inserted as the starter, and played the next 2,129 games (Gehrig has played the day before, hence his 2,130 streak of consecutive games that stood for nearly 60 years).

Morris badly wants to play against Oklahoma, his former team. TCU coach Sonny Dykes badly wants to win the game, and after watching Kansas State quarterback Adrian Martinez run all over the Oklahoma defense Saturday night, quarterback mobility might be a priority.

Duggan would seem to be the more mobile of the two. Sam Jackson might be the most mobile of three, but let’s no go there just yet.

After Oklahoma comes an Oct. 8 game at Kansas, 4-0 Kansas. Then home games against Oklahoma State and Kansas State.  Then at West Virginia, home for Texas Tech and at Texas and at Baylor before closing at home against Iowa State.

Morris should be 100 percent at some point in there, but if Duggan keeps winning, it might be hard to pull that plug.

That’s why Dykes makes the big bucks and I make sentences.

When it comes to media, we like players who will talk.

They don’t need to talk trash or speak like English professors, but the more personality the better.

The cornerback, a graduate transfer from Louisiana-Monroe, tells it like it is. He gives credit to others first. He isn’t disrespectful to opponents, but he doesn’t go out of his way to compliment them.

Think back 15 years or so to another Frogs defensive back, Brian Bonner. Bonner talked a little faster, but the substance is the same.

Newton was the only defensive player to speak after the win at SMU. He called two different players “dawgs,” Duggan a lion, and whistled as if to say “you ain’t kiddin'” when asked about the heat.

The Frogs had Dykes’ “6,” because the SMU outcome “is going on his resume as well.”

Newton took the blame for the last SMU touchdown. He said the defense needs to get better.

There’s was no time to bask in the rivalry win.

“Get over today by tomorrow,” Newton said. “And then it’s back to the drawing board.”

While the football team was bring home the Iron Skillet, the women’s rifle team was just, oh, setting an NCAA record.

The national runners-up last season, TCU set the national mark for team score with 4,758 in a match in Annapolis, Md. A freshman, Julie Johannessen, led the way with a 1,194 aggregate score.

The Frogs placed nine shooters in the top 10 of the smallbore competition that included Navy and the Virginia Military Institute. TCU set a school mark for smallbore (2,365) and posted the second-highest school mark in air rifle (2,393).

In the euphoria of Saturday’s victory, or in attempting to recover from heat stroke or some early-kickoff Bloody Marys, perhaps you all missed a thing or two from Frogs Today. As you’ve come to expect, we had you covered. Here’s our latest from the weekend, in case you missed it.

From the Skff Bayless files

Dykes needs a moment for Max

Why SMU fans are really hurting

Don’t forget to tune into Frogs Today TV, which has a loaded lineup of shows Monday through Friday and will also be at Amon G. Carter Stadium on Saturday for pregame and postgame shows.

The Lumberjacks probably weren’t trying to run up the score. They played just about everybody in uniform, and none of them had any trouble with a Warner defense that allowed eight passing touchdowns and 11.5 yards per play. The defense scored two touchdowns and a safety. There was punt-return TD, too.

After their final touchdown, the Lumberjacks lined up for a 2-point conversion, which would have made it 100-0, but instead took a knee.

The loss might not have been the worst thing about the trip for Warner, which is in Lake Wales, Fla., south of Orlando and east of Tampa. The Royals bused to and from Nacogdoches, a 17-hour one-way drive.

Missouri crumbles: All Missouri needed Saturday was a field goal to beat Auburn. First-and-goal at the 10 in the final minute, the Tigers ran it three times, gained a yard, and set up a 26-yard field-goal try that their kicker couldn’t make.

No problem. Overtime. Auburn had the ball first, stalled out and missed a 44-yard field-goal try. However, Missouri jumped offside, and Auburn converted a 39-yard field goal.

No problem. Missouri would get the ball, too. Second-and-5 at the 20, and Columbia native Nathianiel Peat broke loose for the end zone … and dropped the ball! Auburn recovered in the end zone for the game-ending touchback and an improbable 17-14 win.

The Auburn-Missouri game is drunk

Bad golf shots: This one was from earlier in the month. The bad news? Rory McIlroy lost the tournament by one shot.