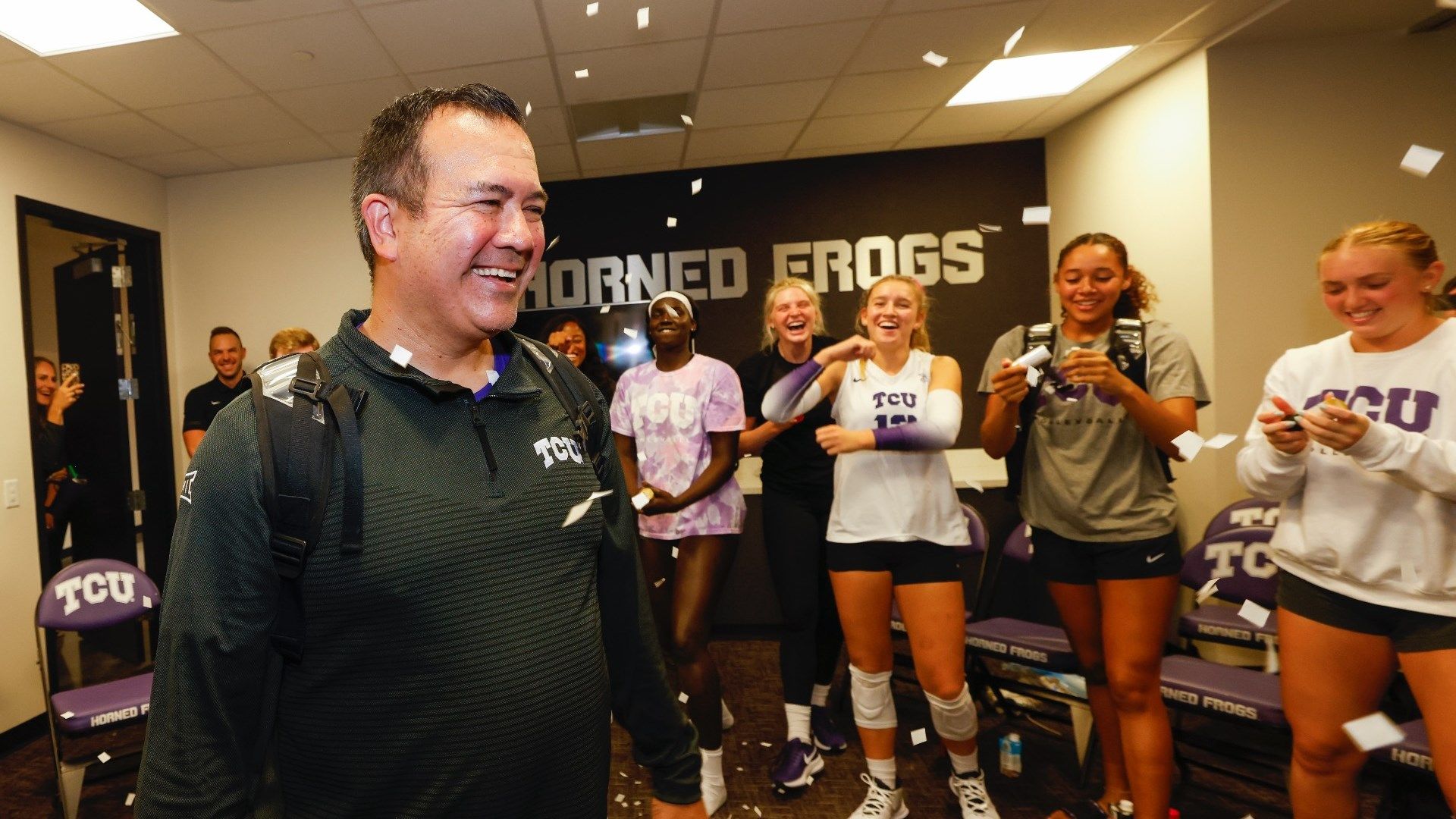 By Jamie PlunkettSeptember 20, 2022No Comments

FORT WORTH — In his first year as a head coach, TCU volleyball’s Jason Williams knew he wanted to challenge his team as soon as he stepped on campus. That’s why, back in January, he motioned to his whiteboard as we sat in his office and told me to take a look at what was written there.

“Look at our first weekend up there, and that’ll tell you how quickly we’re going to turn things around,” Williams said.

At the very top of the board were two items: “Wisc” and “Minn”

These stood for Wisconsin and Minnesota, TCU’s first two opponents. The Badgers and Golden Gophers are both top-five teams in the country, providing a clear signal of how Williams was going to approach his first season. Challenge them early and often.

He knew that doing this would help in a variety of ways, not the least of which is that he’d have a good understanding of exactly where the Horned Frogs stacked up against some of the best in the nation.

“I think realistically we’re going to take some dingers, but I think we’ll have some good wins,” Williams said.

TCU  has been stuck in the mud for quite some time. The Frogs have a .421 win percentage dating to the 2016 season, and that percentage dips to .255 over the past two seasons.

None of that mattered to Williams when he took the job. All he saw was an opportunity.

“I think I’m going to take the program places it’s never been before,” Williams said. “To me there’s no reason that we are not better than Baylor because of the market, just being in Fort Worth. It’s so much easier to recruit to Fort Worth than it is to Waco.”

Williams would know. The DFW native served as Baylor’s associate head coach for two seasons, following four years as an assistant coach for the Bears. While there, Williams helped coach Ryan McGuyre turn the Bears into a perennial powerhouse.

And while he says he still loves Baylor, the rebuild in Fort Worth is full steam ahead.

Months after that meeting in his office, TCU’s challenging non-conference slate has the Frogs sitting at 5-6 as they prepare for Big 12 play, but Williams said he learned a lot about his team through the ups and downs of their first 11 matches.

“The adversity and the challenges that we’ve had, it’s going to put us in a way better position moving forward,” Williams said. “And it got us ready for conference. We played some good opponents, we got challenged, we’ve had our ups and downs, but in terms of mentality, in terms of working on our system, I think it’s been perfect for us.”

The adversity extended beyond the schedule, too. The Frogs have had to shuffle the lineup multiple times due to injuries to key players. Active career assists leader McKenzie Nichols missed two weeks with an injury before returning for the Horned Frog Invitational last weekend. Sophomore libero Cecily Bramschreiber has been out two weeks, and is going to be out for a while longer. She was spotted in a walking boot over the weekend.

Without Bramschreiber and Nichols, the Frogs’ depth has been challenged. Baylor graduate transfer Callie Williams, Williams’ daughter, was relied upon to be the team’s primary setter, while freshman Keagan Polk, a Baylor transfer who is also on the TCU beach volleyball team, has been the starting libero.

At the same time, clear talent has emerged.

Back in January, Williams said to keep an eye on middle blocker/outside hitter Zoe Hall.

“She’s got the mentality,” Williams said. “She’s got a good winning mindset.”

Hall currently has the fourth most kills (36) and fourth highest blocks/set percentage (0.76) while starting only half of the Frogs’ matches. The sophomore from Bridgeport continues to grow and learn, and is quickly becoming a force at the net.

Talented seniors, including Nichols, Julia Adams, Audrey Nalls and Mykayla Myers have helped usher along a big group of freshmen and sophomores who are embracing Williams’ system.

Between the schedule, his scheme and the roster talent, Williams believes he has the pieces to win now. As he said in January, it’s about taking care of business in conference play.

“The schedule is set up to make the tournament,” Williams said. “So now it’s can we get the wins in league play.”

For him, it’s another opportunity to prove that TCU’s turnaround won’t be taking the scenic route.

“I still love Baylor,” Williams said. “I have huge respect for Ryan and the team there, but we’re ready to take over the reins. I will always respect them as a program, but I have no doubt that we’ll have an opportunity to be able to go in there and get a win.”