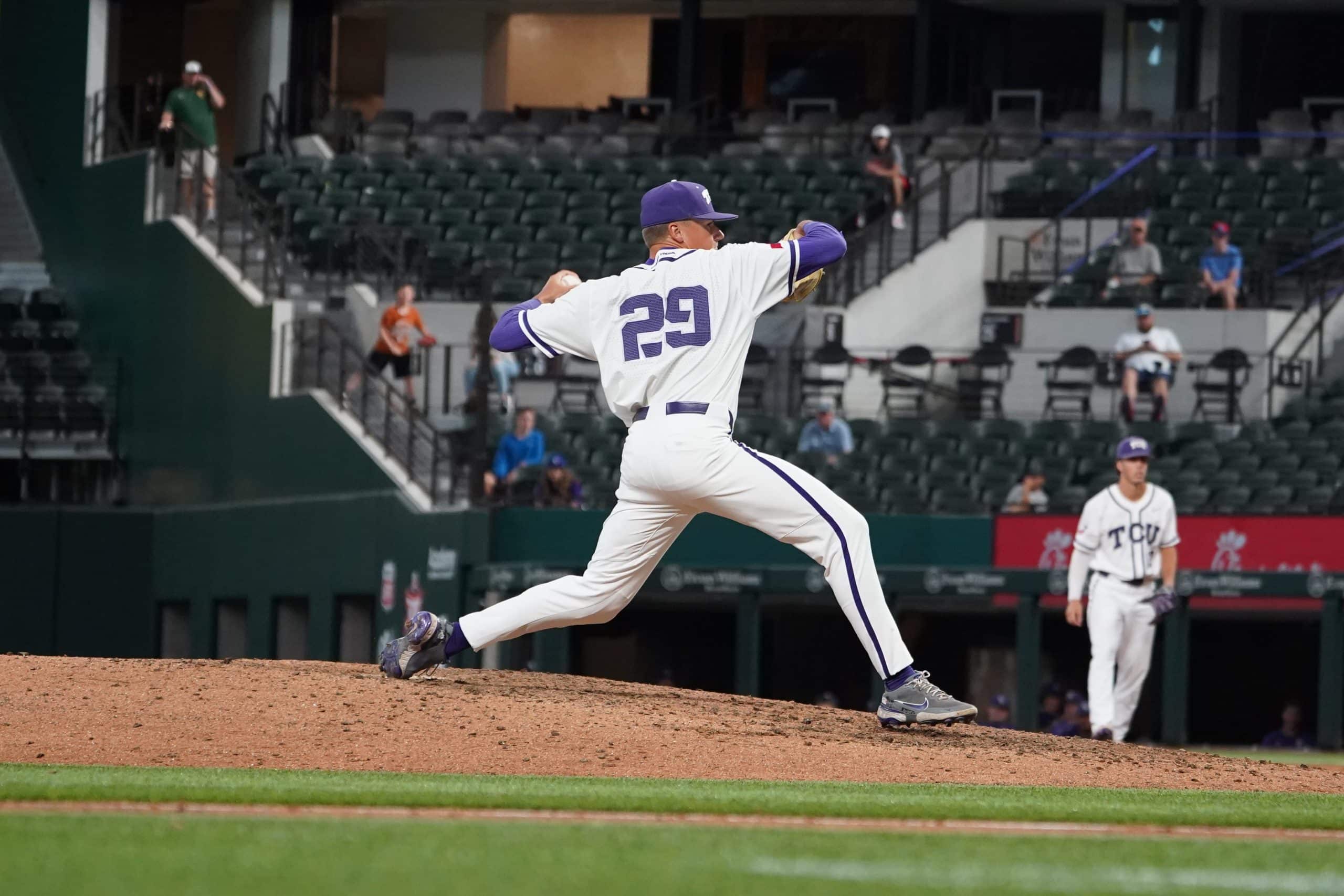 For much of Wednesday’s Big 12 Tournament opener, it looked like TCU had left its bats on the other side of the metroplex.

Stymied by Baylor starter Blake Helton, the Horned Frogs were hitless through the first three innings before a sixth-inning rally spurred them to a 4-2 win.

The Frogs turned to Brett Walker, the one-time Sunday starter who had been relegated to the bullpen over the past several weeks as he looked to get right on the rubber. Walker surrendered a couple of hard-hit balls in the first inning, with a double and a triple giving the Bears a 1-0 lead that would hold into the sixth. He settled down after the first, retiring eight straight from the second through fourth innings and allowing just one hit until a lead-off double in the sixth.

Lifted with one out in the sixth and runners on first and second, Walker finished his first start in over a month having given coach Kirk Saarloos 5 1/3  innings of work, surrendering two runs on four hits with five strikeouts and just one walk. Caleb Bolden relieved and allowed an RBI base hit before ending the inning with the help of an excellent throw by Kurtis Byrne to eliminate a potential base-stealer.

After falling behind 2-0, the Frogs’ offense finally began to stir in the bottom of the sixth.

Tommy Sacco, the most consistent offensive weapon down the stretch, led off the frame with a single. After Brayden Taylor struck out, Byrne ripped a single through the left side on an 0-2 count to put runners on first and second. Bobby Goodloe followed with a long fly ball to left center, one that could have potentially been caught if not for some miscommunication in the Baylor outfield.

But it landed on the outfield grass for an RBI double.

A strange play tied the game and ended the inning. David Bishop ripped a sharp liner to left that was caught for the second out. But Goodloe, thinking that there were two outs, took off running on contact and was doubled up with a throw to second. Thankfully for TCU, Byrne tagged at third and sprinted home while the Bears took their time touching the base, allowing the tying run to score before the third out was officially recorded.

The momentum that was temporarily shifted back to Baylor swung decidedly TCU’s way in the eighth, as the umpires got involved.

After a one-out walk, Augie Mihlbauer replaced Bolden on the mound and was quickly called for a balk (and on his birthday, no less). That brought Saarloos out of the dugout with a glare that could melt steel, as he vehemently disagreed with what the broadcast said was the first balk of Mihlbauer’s four-year career at TCU. He was able to get out of the inning and set up TCU to take the lead in the bottom of the frame.

Sacco walked to open the Frogs’ eighth and went first to third on Taylor’s base hit a batter later. A wild pitch allowed Sacco to scamper home, and Taylor would follow him on Byrne’s second hit on the game to put the Frogs in front 4-2. Garrett Wright pitched a solid ninth, with a walk and two strikeouts, for the save, his fourth of the season.

TCU will turn to Marcelo Perez in Game 2 Thursday, facing Texas and likely starter Lucas Gordon. Perez allowed four runs on four hits in 3 1/3  innings in his last outing against the Longhorns, while Gordon scattered five hits across 5 2/3  frames while allowing just two earned runs when he faced the Frogs back in April.

First pitch is set for 4 p.m. The game will be broadcast on ESPNU.