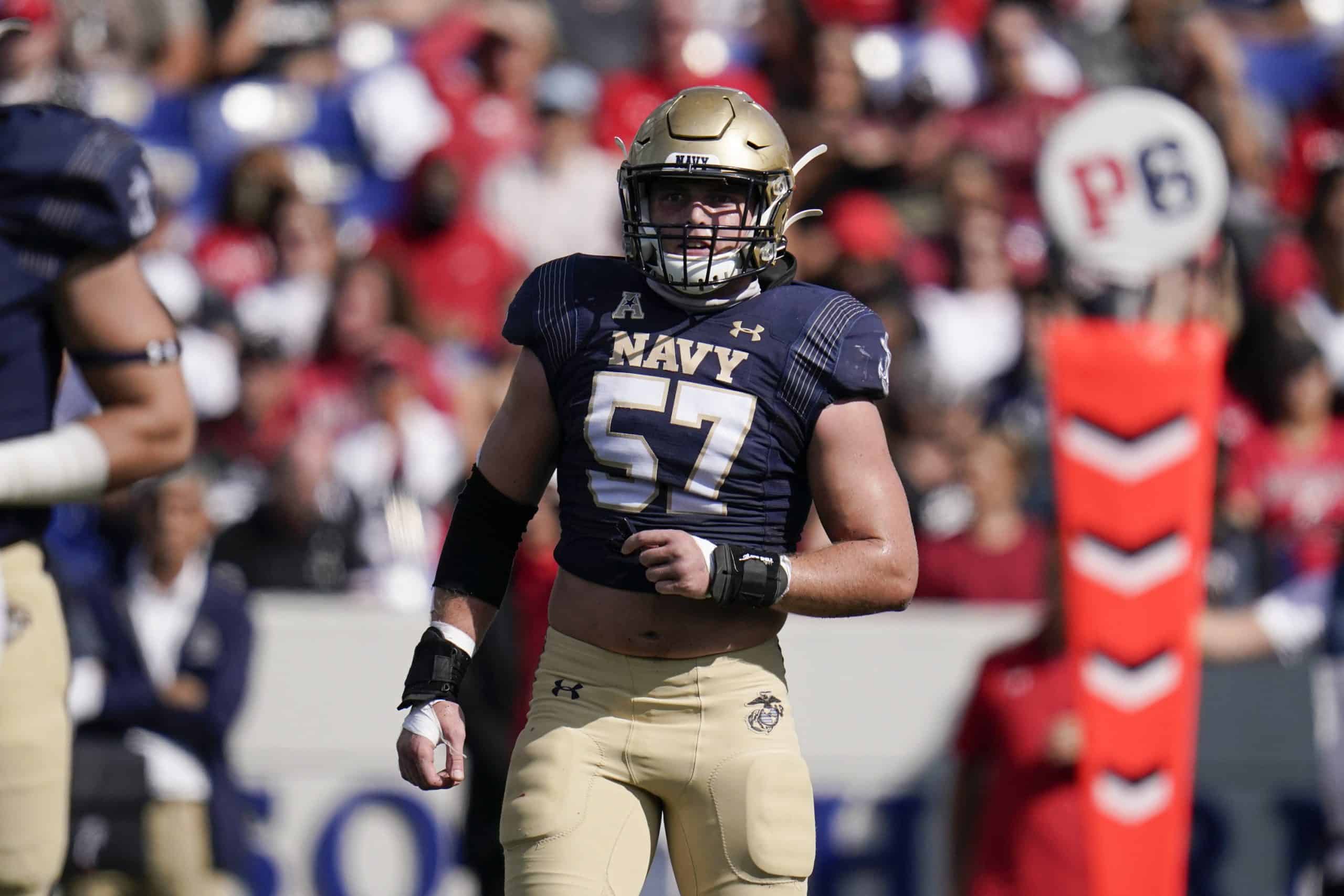 Now on campus: Take a look at the newest TCU football commitments

Home » Now on campus: Take a look at the newest TCU football commitments

Johnny Hodges comes to TCU after starting nine games in 2021 as a sophomore for Navy (The Associated Press/Julio Cortez).

FORT WORTH — The transfer portal taketh and giveth at TCU football, just in time for the start of the semester and the start of drills leading up to spring practices.

The Horned Frogs pulled seven players from FBS schools out of the portal, four of whom played for Power 5 programs, and also added two junior-college All-Americans. All nine players are eligible to participate immediately in team activities.

Hoping to stretch out the depth chart on defense, TCU added three safeties, two linebackers and a defensive tackle. The Frogs’ offense picked up a running back, a tight end and a lineman. TCU signed nine prep players last month during the early signing period.

TCU saw the most ballyhooed recruit in program history, running back Zach Evans, transfer last week to Ole Miss. The former five-star recruit was one of 10 players who left the program via the portal after Sonny Dykes was hired to replace Gary Patterson as coach.

So, out with the old and in with the following new players.

The coaching staff is very familiar with Ali, who is a senior transfer from SMU. The Keller Timber Creek graduate started eight games for the Mustangs last season at three different positions, center and both tackles. TCU has depth on the line, with five of the seven players who started a game in 2021 returning, but the biggest loss is left tackle Obinna Eze. Ali, at 6-foot-5 and 304 pounds, Ali should be in the mix to take over that spot.

Bailey was a star running back and three-star recruit at Denton Ryan High, where he rushed for 4,026 yards and 51 TDs as a three-year starter. He played two seasons at Louisiana, but only five games in 2020. He was far more productive last season, rushing for 642 yards and eight TDs. His transfer follows coach Billy Napier leaving for Florida. Bailey (5-foot-8, 197 pounds) will be joined in 2023 by little brother Jordyn, a speedy receiver who gave a verbal commitment over the weekend.

The Frogs traveled a long way to find Blue-Eli, who wasn’t highly recruited at Paulsboro (N.J.) High but but developed into a second-team NJCAA All-American at Monroe College in New Rochelle, N.Y. At 6-foot-3 and 305 pounds, he gives TCU size it was lacking inside and is a candidate for immediate playing time in 2022. He can stuff the run and get to the quarterback, with 2.5 sacks in 2021 among his five tackles for loss.

The Frogs add depth for their new 3-3-5 scheme with Burdine, who in 2018 was rated as the top safety prospect in Louisiana. It didn’t translate into much playing time at Missouri, where he redshirted in 2019 and played only 14 games the past two seasons. He was limited to five games in 2021 as he dealt with injuries. A native of Slidell, La., Burdine (6-foot-1, 190 pounds) comes to TCU with three years of eligibility.

A former four-star recruit and the state’s No. 2 prep inside linebacker in 2020, Cooks (6-foot-2, 218 pounds) transfers in from Texas after playing in only one game for the Longhorns. He had a terrific high school career at Pearland Shadow Creek, helping lead the Sharks to the Class 5A Division I state championship in 2019. TCU returns their top four linebackers from 2021, but Cooks should compete for playing time in 2022.

A former Lacrosse player from Darnestown, Md., Harris (6-foot-2, 210 pounds) started seven games in 2021 for Navy and was their fourth-leading tackler (50) despite playing in only nine games. His best game came against Dykes-coached SMU, with a career-high 14 tackles, an interception and a pass breakup. His next best game was against Tulsa (seven tackles, two for loss, sack, forced fumble), where new TCU defensive coordinator worked the past three seasons.

The Minnesota native comes to TCU after being selected as a first-team NJCAA All-American at Iowa Western CC in Council Bluffs, the hometown of Frogs quarterback Max Duggan. Obiazor (6-foot-3, 205 pounds) played in 10 games in 2021, registering 2020 tackles and breaking up two passes. He will have a chance at early playing time in the new 3-3-5 defense, especially with the losses seniors T.J. Carter and La’Kendrick Van Zandt. Obiazor’s sister, Nneka, plays basketball at UNLV.

Another safety with a chance at immediate playing time, the 6-foot-1, 190-pound Perry transfers from Colorado and will make his TCU debut Sept. 2 against the Buffaloes at Folsom Field. Perry led Colorado in 2021 with three interceptions and finished third with 72 tackles. A three-star recruit from Rancho Cucamonga (Calif.) High, Perry also ran track at Colorado, competing in the 100 (10.65) and the 400 relay (40.11).

Wiley (6-foot-7, 251 pounds) transfers in from Texas after starting 9 of 11 games played, grabbing nine passes for 67 yards and two TDs in 2021, including one score in the Red River Shootout against Oklahoma. His career-best reception of 52 yards came against TCU in 2020. Wiley was the starting quarterback at Temple High as a senior, throwing for 2,314 yards and 27 TDs, but was the Wildcats’ tight end as a junior.