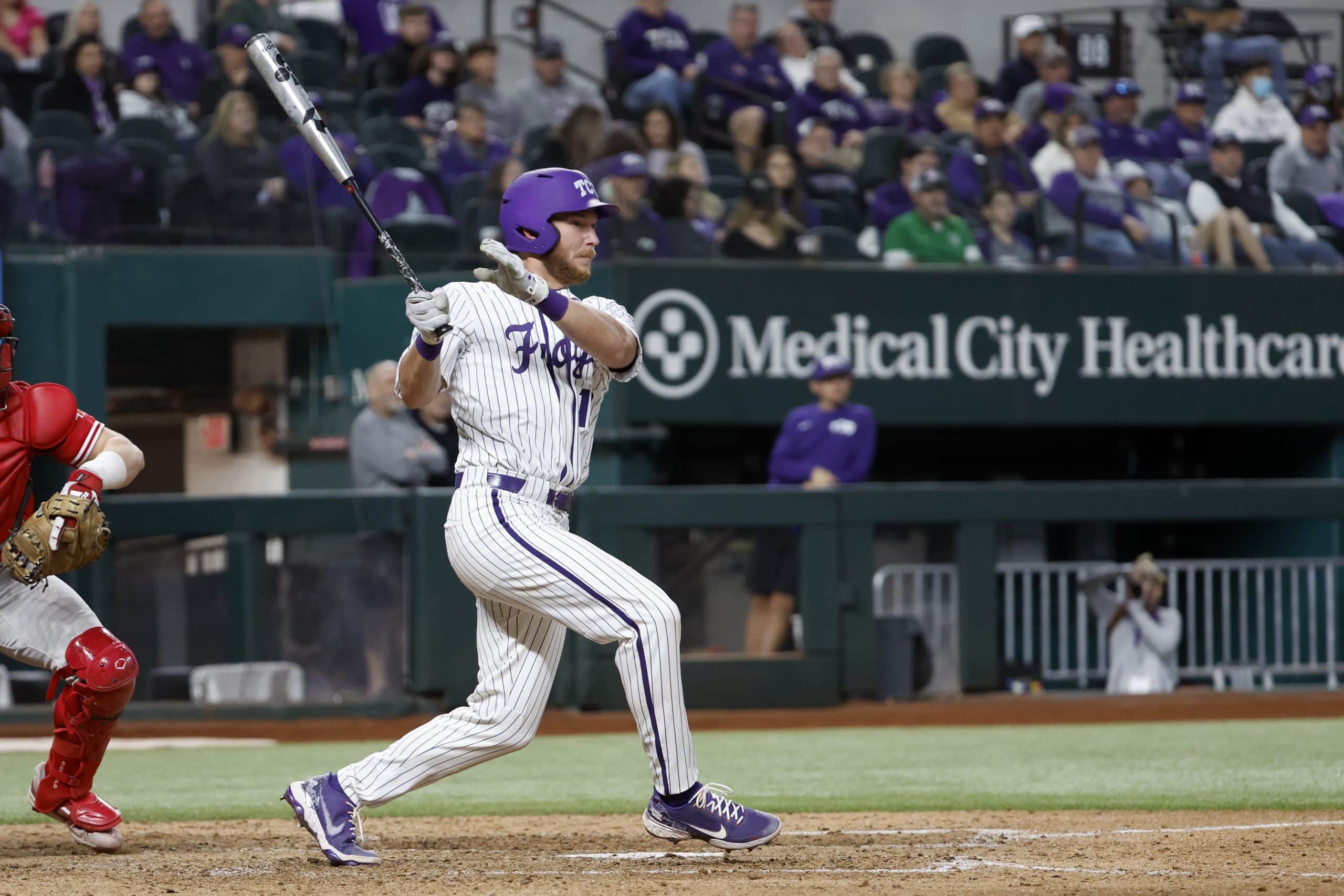 TCU Baseball’s offensive struggles continued Tuesday night, as they fell to rival DBU 6-1 at Horner Park in Dallas. The start time was delayed by nearly two hours due to thunderstorms in the area.

Caedmon Parker got the start, his fourth midweek tip of the season, and the struggles that had plagued the young freshman in his first three go-rounds continued against the Patriots.

After the Frogs went in order in the top of the first, DBU took advantage of a lead-off walk when Jase Grady launched a two run shot to put the Pats on top. After the first seven TCU batters were retired, Reed Spenrath launched a ball deep into the night in left field to cut the lead in half, 2-1.

TCU is a team that has taken advantage of free bases all season long, and came into Tuesday’s tilt sixth in the country, having drawn 197. But in Dallas, it was the Frogs issuing walks, as Parker surrendered four in just three innings of play. Parker exited having allowed three runs on four hits and throwing just 32 strikes in his 60 pitches.

Cam Brown replaced him, making his first appearance as a reliever this season, but struggled to find the zone as well; he would end up walking three in just two innings of work and allowed two runs in the fifth thanks to a walk and back-to-back extra base hits.

A beautiful drag bunt to right by Elijah Nunez put a runner on to start the sixth, but Nunez fell victim to a double play when Brayden Taylor’s fly ball dropped out of the glove of the right fielder but was ruled out via the transfer rule. Nunez had advanced to second base on the drop and was ruled out when he failed to return to first.

Drew Hill replaced Brown in the bottom of the sixth, making just his third appearance of the season, and was greeted by a first pitch solo shot to left off the bat of Nate Rombach. Hill would go 1.2 innings before giving way to Augie Mihlbauer. After allowing seven walks across the first five frames, Hill and Mihlbauer allowed just one over the next two frames of work. Freshman Trip Banta made his TCU debut in the bottom of the eighth, and after a tough start – allowing an infield single, hitting a batter, and walking another – kept the Patriots off the board thanks to a strikeout and an impressive double play turned by Sacco.

After struggling with runners in scoring position in Austin over the weekend, TCU had few chances to score Tuesday. The combination of Zach Heaton and Peyton Sherlin was nearly unhittable across the first six frames, allowing just one run on four hits with seven strikeouts. Zane Russell was just as sharp, striking out three before being lifted with two outs in the eighth after allowing back-to-back base hits to Taylor and David Bishop. The two runners on was a first for the Frogs in Tuesday night’s game but was quickly rendered moot when Brady Rose got Gray Rodgers to strike out to end the threat.

Kurtis Byrne doubled with one out in the ninth but would finish the game stranded on second, one of the seven runners to be left on base in the game. The Frogs were 0-6 with runners in scoring position and 1-9 in advancement opportunities.

With a difficult series against a top five Texas Tech team on deck, TCU has more questions than answers currently. Kirk Saarloos needs to find a spark in his lineup and potentially a third pitcher for the weekend, as the Frogs can ill-afford to drop a home series to the Red Raiders if they hope to stay in contention for a Big 12 title. But this is still a team that came into the night averaging seven runs per game and certainly has the talent to turn things around.

Texas Tech comes to town Thursday for the start of their three game set at Lupton.