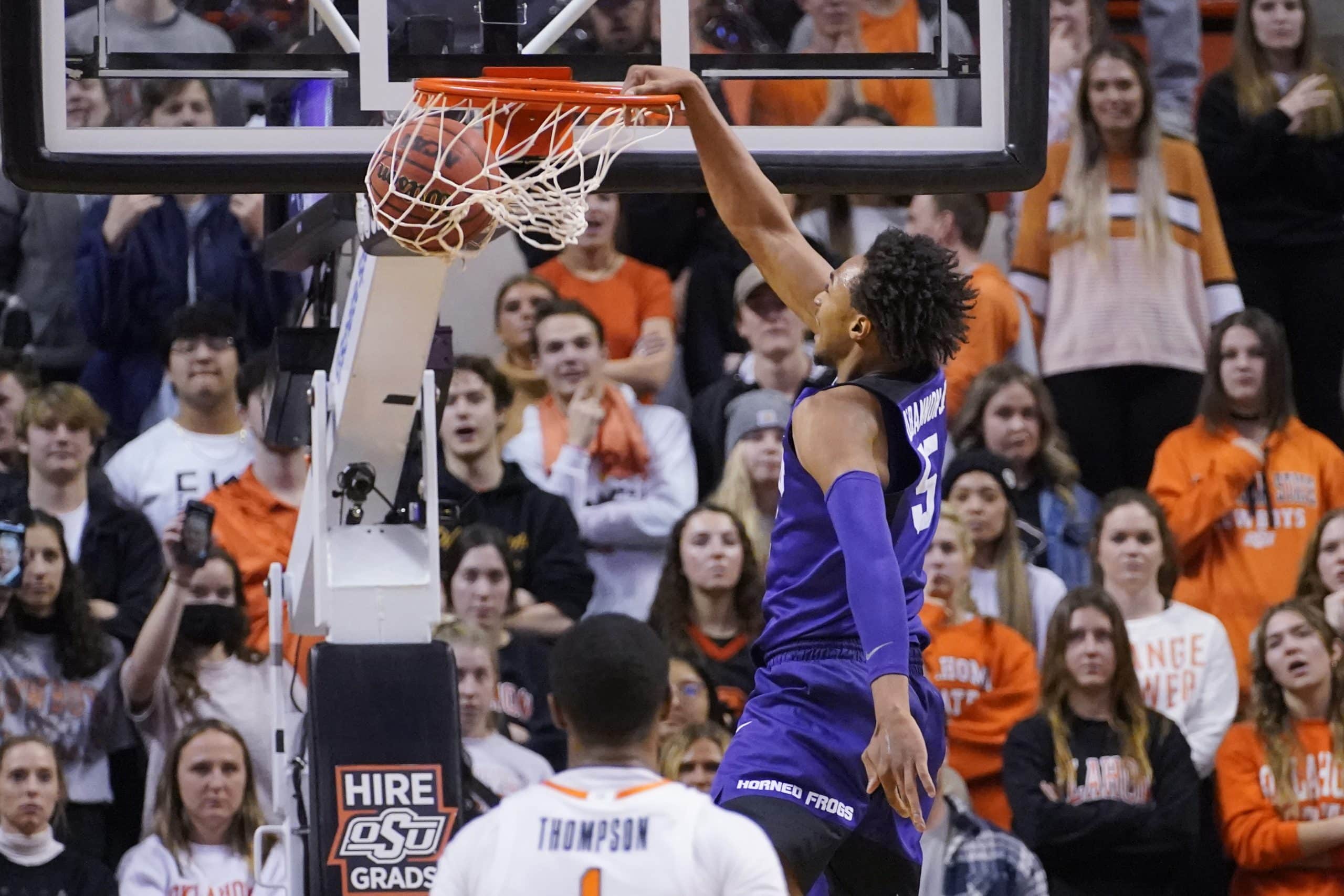 Chuck O’Bannon Jr. led TCU with 13 points at Oklahoma State, including this dunk with 3:16 to play (The Associated Press/Sue Ogrocki).

Not too many Big 12 teams feel at home when they visit Iowa State, but TCU has been the exception the past few seasons when playing at Hilton Coliseum in Ames, Iowa.

The Horned Frogs have won three of the past four games at Iowa State, including a 76-72 victory last season. The Frogs’ success extends back to Fort Worth, too, with them winning seven of the past eight in the series.

This season could be different. The Cyclones have a new coach, T.J. Otzelberger, and remade themselves via the transfer portal.

Their leading scorer, Izaiah Brockington, is on the third team of his college career. Three of the five probable starters are transfers, and another is a true freshman.

TCU welcomed eight transfers this season, including seven from the portal. Emanuel Miller has been the best of the group, averaging 10.1 points.

Maybe they will feel as cozy at Hilton Coliseum as previous Frogs players. If so the Frogs will have a chance to start their three-game stretch against ranked teams with a win.

To do so will require a massive reversal of program history. The Frogs are only 2-93 all time against ranked opponents on the road, but the last win was in 2019 at Iowa State.

More potentially good news? The next two games against No. 23 Texas and No. 13 LSU are at Schollmaier Arena.

About TCU: The Frogs lost to Oklahoma State 57-56 Wednesday even though they led by nine points with 3:16 to go. Oklahoma State closed the game on a 12-2 run, including 7-0 over the final 1:33. … Chuck O’Bannon Jr. lead TCU with 13 points at Oklahoma State and has hit a 3-pointer in seven straight games. Francisco Farabello, who scored a career-high 12 points off the bench, has a 3-pointer in six straight games. … Though he has been held below double figures in his past two games, Mike Miles Jr. ranked third in the Big 12 in scoring (16.2 points per game) and is the only player in the conference who ranked in the top five in points, assists (fourth, 4.3). He is one of four players in Power 5 conferences to average at least 16 points, 4.0 assists and 3.5 rebounds. … John Denton and athletic director Jeremiah Donati will have the radio call. Brian Estridge is off because of COVID protocols.

About Iowa State: After racing through non-conference play at 12-0, the Cyclones have found the going to be much tougher in the Big 12. … However, Iowa State boasts one of the nation’s top defenses. The Cyclones are issuing only 60 points per game and have held opponents to 40.3% shooting and 26.7% on 3-pointers. Their Pomeroy (KenPom) adjusted deficiency ranking of 88.3 ranks fifth nationally. TCU ranks 25th. … Iowa State had only three scholarship players return from last season’s team after a coaching change. T.J. Otzelberger was hired from UNLV to replace Steve Prohm after a 2-22 2020-21 campaign. … Izaiah Brockington, a senior guard who started last season at Penn State, leads the Cyclones with 16.2 points per game, but doesn’t shoot many 3-pointers. He also leads Iowa State with 8.0 rebounds a game.