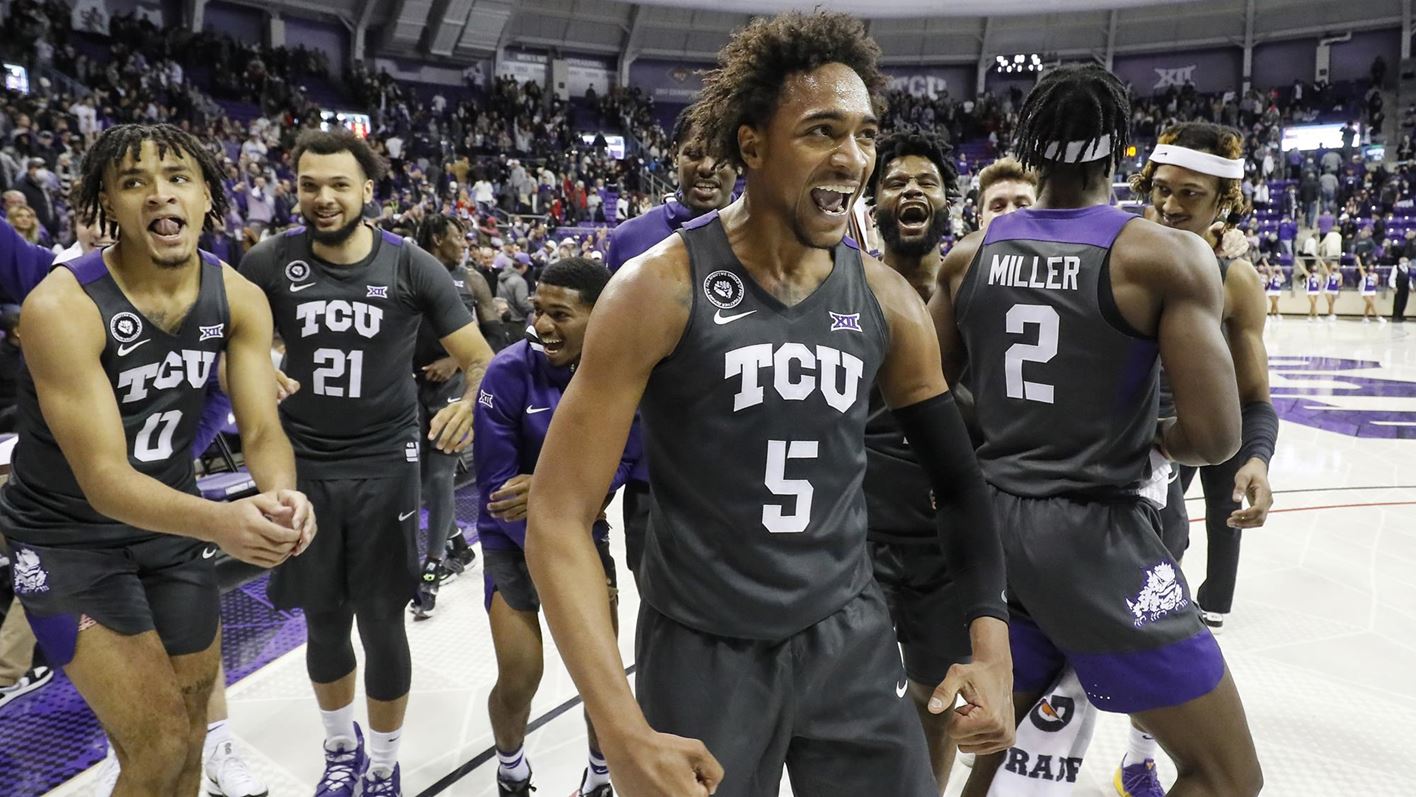 FORT WORTH — A game like the one the TCU men’s basketball team won Saturday afternoon is often described as physical, which can refer to teams playing well defensively and battling things out on the boards and also to referees swallowing their whistles.

Oklahoma guard Elijah Harkness no doubt agrees, after he looked helplessly at the officiating crew when his off-balance shot went wayward in the game’s final seconds.

It wasn’t a foul under normal circumstances, but especially not in the rough-and-tumble Big 12 Conference. TCU topped the Sooners 59-58 in overtime to improve to 12-2 but more importantly 2-1 in conference play.

“It was super physical for both teams,” Horned Frogs guard Micah Peavy said. “They let us get away with a lot of stuff today, especially late.”

Get used low-scoring games, not just with TCU but across the Big 12. It’s the most competitive conference in the country. Teams have retooled themselves with veterans from the transfer portal and beefed up defenses to make their games resemble the late 1980s Detroit Pistons and Chicago Bulls more than the shooter-friendly college game from as recently as last season.

The Frogs have won two straight with similar scores, topping Kansas State 60-57 on Wednesday. But look around the league, which on Saturday saw last-place Kansas State beat No. 19 Texas Tech 62-51. Oklahoma State upset No. 1 Baylor 61-54. It was the second loss of the week for Baylor, which also lost 65-62 Tuesday to Texas Tech.

“You’re not going to shoot it well from 3 in this league,” TCU coach Jamie Dixon said. “So you can’t rely on that. You’ve got to defend and rebound, and you’ve got to win games like this.”

Peavy scored a season-high 11 points, which Chuck O’Bannon Jr. matched with the biggest shot of the game for TCU. Left wide open in the corner as Mike Miles Jr. drove to the basket, O’Bannon drilled a 3-pointer with 27.3 seconds left to snap a 56-all tie.

“All game I couldn’t get the 3-ball to fall, but it felt good all day,” he said. “My next shot I always expect to go in, and that’s exactly what happened at the end of the game.”

TCU trailed for much of the game and all of the second half until Peavy hit a runner for a 42-40 edge with 5:52 remaining. That was part of an 11-2 run that put the Frogs ahead 48-42 with 1:50 left. But Jordan Goldwire kept Oklahoma in it, and Jalen Hill sneaked inside for an easy layup with 0.2 second left for a 50-50 tie to force overtime

“They do that every play … every play,” Dixon said. “So it’s all we had talked about. It wasn’t like it was a new play. We didn’t get it done.”

Umoja Gibson opened the extra period with a 3-pointer for Oklahoma, but TCU didn’t buckle. Eddie Lampkin Jr. put back a Miles miss on the next Frogs possession, and his nifty no-look pass to Miller for an easy bucket 30 seconds put TCU in the lead at 54-53.

Harkness completed a three-point play a minute later as the Sooners regained the lead, 56-54, but Lampkin quickly tied it underneath.

O’Bannon came away with a steal on the ensuing Oklahoma possession, and Miles found him in the corner for the game-winning shot second later.

The Frogs had to hold their breath late, but they did so with quality defense as Harkness searched for a shot or whistle.

“We’re going to fight to the end, and we knew if that we have another chance in overtime, we just have to close it out,” Miller said. “I think collectively as a group we just executed what we have to do and we got it done.”

TCU returns to the court Wednesday at Oklahoma State, which is only 2-3 in the Big 12 but those victories were upsets of Texas and Baylor. The Frogs will do so in second place in the conference as teams beat each other up.

It’s going to be that way all season.

Get used to it.