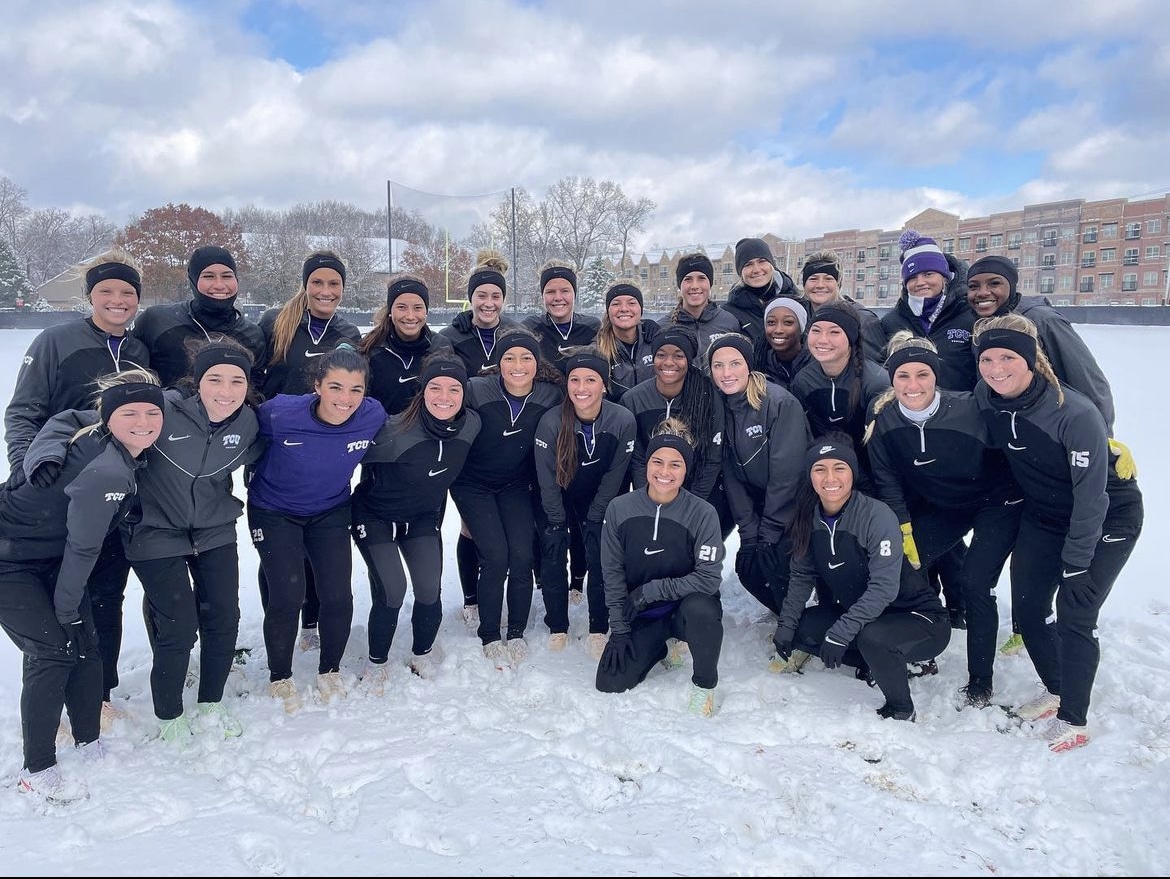 By Ray CartwrightNovember 18, 2022No Comments

SOUTH BEND, Ind. – The common TCU football phrase, “Fight ’em til hell freezes over then fight ’em on ice” applies perfectly for TCU soccer if the Horned Frogs hope to advance in the NCAA Tournament.

The fifth-seed Frogs are scheduled to play No. 4 seed Michigan State at 1 p.m. in the second round in South Bend, Ind., where the weather will be frigid. The expected high temperature is 27 degrees with a chance of snow.

TCU has not encountered conditions like that this season. The Frogs got a small taste of playing in cold weather last weekend in their first round, but nothing like this.

Coach Eric Bell has experience coaching in weather like this. When he was an assistant coach at Florida State, the Seminoles had several cold-weather games in South Bend.

TCU and Michigan State (17-2-3) have a similar style of play. Both try to dominate possession and look to set up their offenses through their passing game.

Bell is excited for the chess match, looking forward to opportunity to break the Spartans’ pressure. That will be the key the Frogs — if they can control possession and create a multitude of scoring chances either via corner kicks and create free- kick opportunities by being aggressive and drawing fouls.

This is where senior midfielder Gracie Brian will be big for the Frogs. She always positions herself well to clean up rebounds in the box. If Brian can get going, the Frogs will be in a good spot.

TCU (13-4-5) will also to look to graduate forward Messiah Bright to be, well, Messiah Bright. She is TCU’s all-time leading goal scorer with 50 in 101 games. Look for TCU to attempt to get her the ball in space to use her athleticism to create scoring chances.

The unsung heroes for TCU the last couple weeks have been the back line of Brenna Brosam, Olivia Hasler, Chaylyn Hubbard and Megan Reilly. They’ve done an exceptional job at limiting scoring opportunities, cleaning up the box in front of goalkeeper Lauren Kellett, and shutting down opposing offensive attacks.

They’ve even been able to contribute offensively for the Frogs as well. Brosam scored her first career goal last week in the 3-1 first-round win over UT-San Antonio.

TCU will also lean on Kellett, the All-Big 12 goalkeeper. Since the start of conference play, she hasn’t allowed a goal in eight of the 13 matches.

If the Frogs can advance to the Sweet 16 for the third time in as many years, they will take on the winner of the Norte Dame-Santa Clara contest at 5:30 p.m. Sunday at 5:30 p.m. TCU faced Santa Clara earlier this season, winning beating 7-0 in Fort Worth.