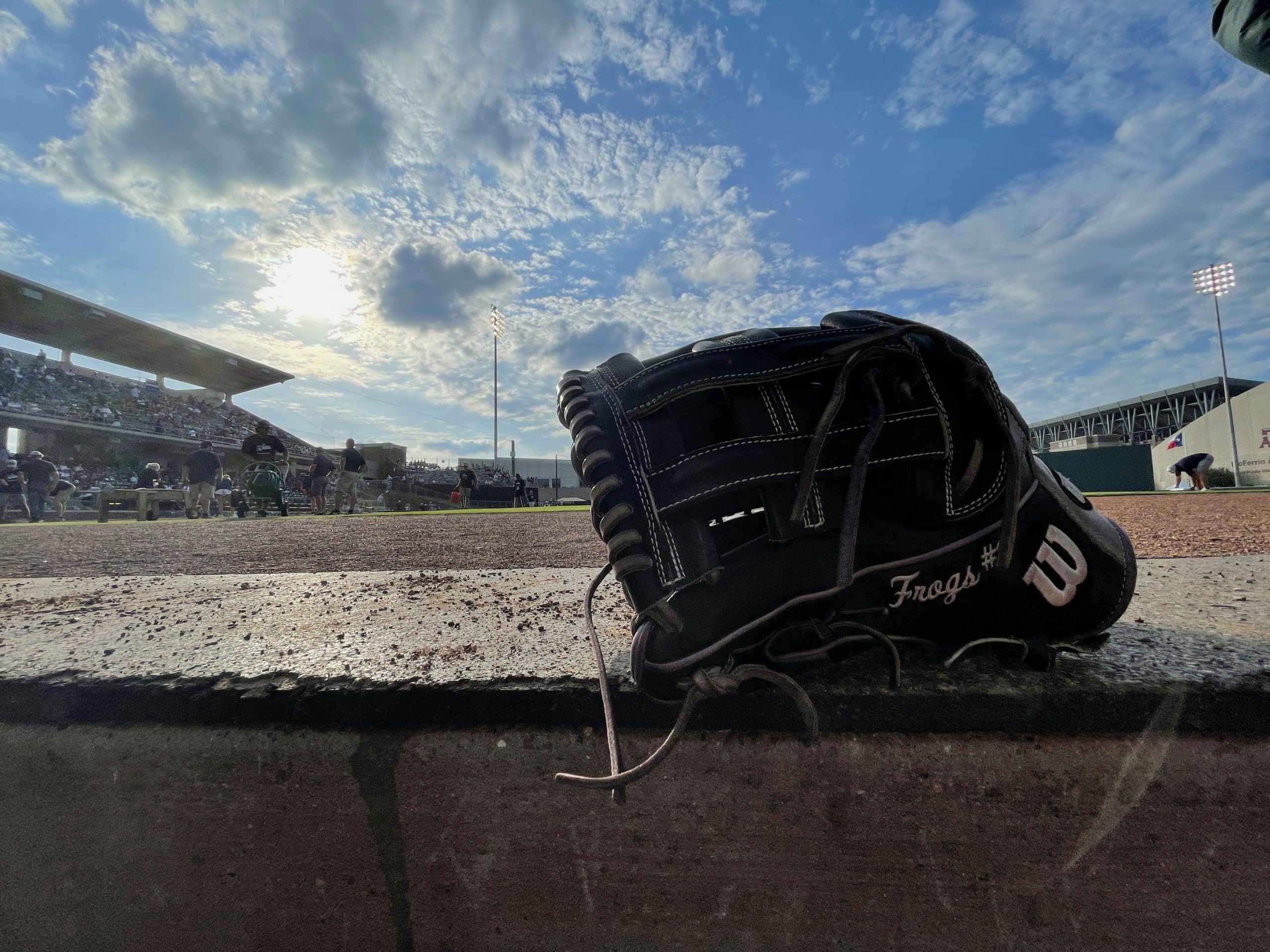 By Jamie PlunkettJune 6, 2022No Comments 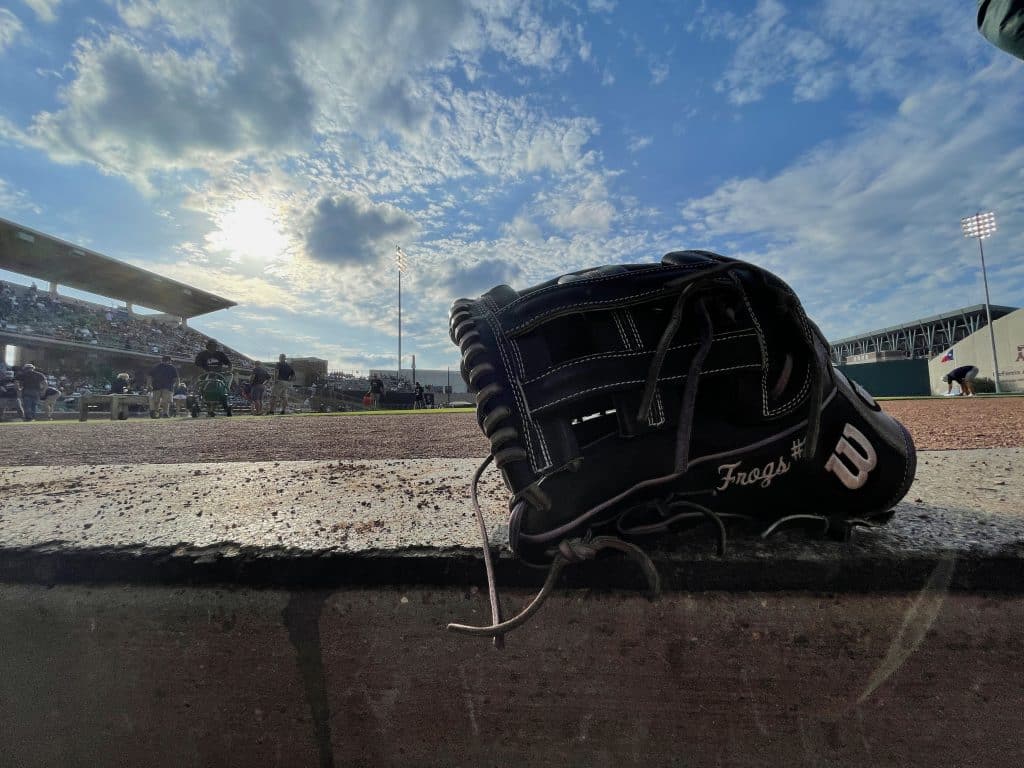 A glove rests on the ledge of a dugout ahead of TCU’s 15-9 loss to Texas A&M (TCU Baseball).

COLLEGE STATION — It was, in every way, a classic TCU vs. Texas A&M postseason baseball game. Except the Aggies won.

A seven-run ninth inning powered the Aggies to a 15-9 victory, as TCU’s bullpen ran out of steam down the stretch. Frogs relievers allowed 13 runs in the final four innings, walking seven and striking out only three as the Aggies simply overpowered TCU.

“That’s what they’ve done all year,” coach Kirk Saarloos said. “They’ve hung their hat on offensive baseball, and it was one of those deals where we just couldn’t get the last three outs.”

Both Saarloos and Aggies coach Jim Schlossnagle had been asked about the potential TCU-Texas A&M matchup multiple times since the College Station regional was announced, and while both noted the newsworthiness of the story, they also deflected any notion that it increased the intensity of the game.

Whether it had an impact on Sunday night, who knows? But the game provided enough drama and highlights for it to go down as an instant classic.

The game was a five-hour marathon that ended after midnight, with Texas A&M advancing to the Super Regionals. First pitch came at 7:06 p.m., with a packed Blue Bell Park rocking, full of Aggie chants, and TCU fans hoping for a live reenactment of what took place in 2012.

For the first few innings, TCU took control. Left-hander Austin Krob dazzled with a throwback performance, using his full arsenal in his first start since March 15 to pitch into the sixth inning. He stifled the Aggies lineup, striking out a season-high eight along the way and impressing his former  coach along the way.

“I knew once we let him off the hook in the first inning, I know Austin Krob as well as I know my own son, and if you open the door for that guy and he catches a rhythm, he’s going to fight you,” said Schlossnagle, who left TCU after last season. “He works with great pace. He’s an exceptional athlete. I’m surprised he’s still in college. He’s had some injuries. There’s been a lot of great lefties out of TCU, and if he stays healthy he’ll be the next one.”

Texas A&M threatened to break things open early, loading the bases against Krob with just one out in the first inning. After a quick visit from Saarloos, Krob settled down. He struck out Ryan Targac swinging on a full count before getting Troy Claunch to ground out softly to Tommy Sacco to end the inning.

The craziness continued in the bottom of the inning, after Elijah Nunez led off with a drag bunt single. Nunez attempted to steal as Tommy Sacco struck out, and reached safely. The throw deflected off Texas A&M shortstop Kole Kaler into center field, allowing Nunez to advance to third.

But Nunez was soon sent back to first base, after the home plate umpire decided Sacco had committed batter’s interference on the throw down to second base. After a quick conference, the umpire crew also called Nunez out at first. Saarloos and Bill Mosiello both asked for an explanation, before walking away disgruntled.

Here’s an explanation of the rule, according to UmpireBible:

The batter interferes on strike three. Jaksa/Roder (p. 94) tells us that if the batter strikes out while interfering, he cannot be called out for interference because he is already out. In this situation, you must call an out on the runner. Other runners must return.

More shenanigans occurred in the fourth inning, when the Aggies’ defense temporarily abandoned them and led to two TCU runs. On what should have been a routine ground ball, Kaler didn’t step on the bag and his throw to first was late. After a review, requested by Schlossnagle, both David Bishop and Luke Boyers were ruled safe.

With two on and no out, Gray Rodgers bunted. The throw to first was in the dirt, making Rodgers safe and allowing Bishop to score. Two batters later Nunez grounded to second, scoring Rodgers.

Texas A&M wouldn’t stay down, though. The Aggies scored two runs in the sixth, knocking Krob out of the game in the process, before the fireworks kicked off in the seventh.

A&M put up five runs in the seventh, capped by a three-run home run off the bat of Dylan Rock, to take a 7-3 lead on TCU. Bubbles obstructed the view of the field, as Aggies fans danced, chanted and whooped.

The Frogs responded, though, scoring four runs in the bottom of the inning to silence the crowd. With runners on the corners and no outs and the Frogs already having scored a run, Brayden Taylor launched his 13th home run of the season to deep center, tying the game at 7. It was Taylor’s third home run in two days as the Frogs’ third baseman seemed to be willing TCU to a victory.

Texas A&M reclaimed the lead with a run in the eighth, but TCU’s MVP this season, Tommy Sacco, put the Frogs ahead one final time with a two-run home run in the bottom of the inning.

It wouldn’t be a storybook ending for the Frogs, though. Instead, TCU heads back to Fort Worth while Texas A&M waits to see who it will host in a Super Regional.