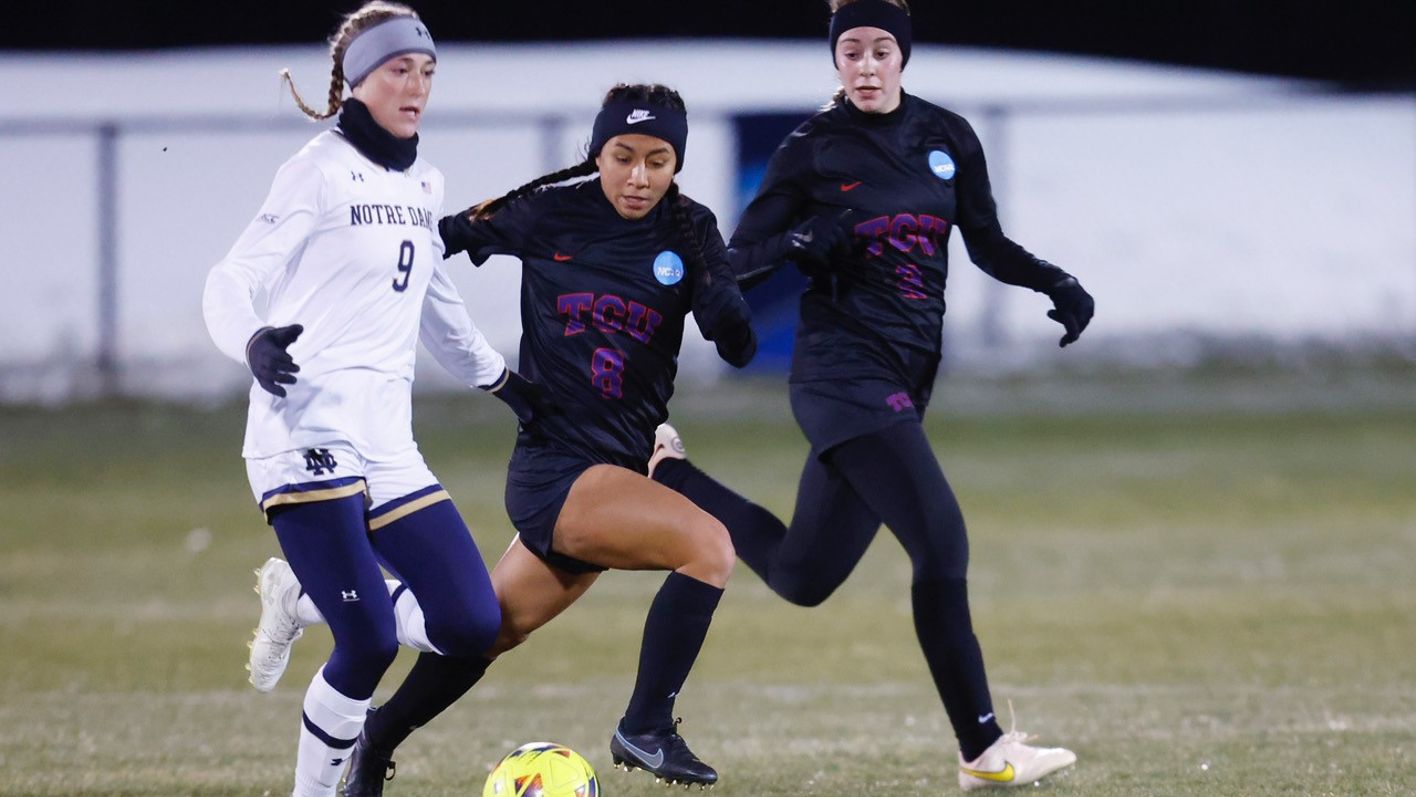 By Ray CartwrightNovember 21, 2022No Comments

TCU had opportunities in its Sweet 16 game, but couldn’t covert any of them (TCU Athletics).

SOUTH BEND, Ind. – TCU fought to the end, but in the end the Horned Frogs came up short of advancing in the NCAA Tournament.

Notre Dame scored a goal in each half, and TCU couldn’t covert a few close-range chances in a  2-0 loss in the Sweet 16.

Goalkeeper Lauren Kellett made five saves in the match.

TCU ends its season with a 14-5-5 record. The Frogs are one of 14 programs nationally to make the NCAA Tournament the past seven years, and they reached the Sweet 16 for the third consecutive season.

“Congratulations to Notre Dame for advancing,” coach Eric Bell said. “We ran into a buzzsaw today, and they’re a good team. They deserved to win today. I couldn’t be more happy with our group for the way they performed and played. They played some really good soccer, and today we ran into a better team. I couldn’t be more proud of our seniors. We’re the standard in our league and before long, we’ll be in the Final Four.”

Buzzsaw is an accurate description of Notre Dame. From the opening whistle the Fighting Irish applied pressure that the Frogs hadn’t seen all season.

Notre Dame was flying all over the field, swarming the Frogs every time they touched the ball. TCU’s defense held strong early, thwarting Notre Dame’s relentless attack. TCU threw bodies at Notre Dame to block shots and to force Notre Dame to continuously reset its offense.

It was in the 20th minute when Notre Dame got into transition. Kiki Van Zanten found fellow forward Olivia Wingate streaking down the field, and she was able to finish for a 1-0 lead.

From there it felt like TCU weathered the Fighting Irish storm, as the offense was able to press the action late in the first half and create several decent chances. Included was a strike from midfielder Payton Crews that forced Fighting Irish goalkeeper Mackenzie Wood to make a spectacular leaping save.

It looked like TCU found something going into the half. That wasn’t the case, though, as Notre Dame came back out and was immediately all over TCU again.

That didn’t deter the Frogs as they continued to fight to stay in the game. In the 65th minute on a Notre Dame throw in, TCU left Irish defender Maddie Mercado unmarked, she dribbled the throw-in a couple yards, and fired a shot that made it past Kellett.

TCU then saw an uptick in pressure on the offensive end, mustering eight shots in the second half. It just wasn’t their night as one of those shots found a post, another went just wide of the net by a mere foot, and two of them nearly grazed the crossbar.

Usually most teams when up 2-0 allow this kind of pressure, falling back and packing in the defensive end to run clock, but Notre Dame kept the pedal to metal. TCU’s defense still held strong. While conceding two goals may look like a so-so evening defensively, this was  nice effort from TCU on defensive end.

“Defensively, we changed some things up just yesterday to try and deal with some of the things they present,” Bell said. “For only having one day of training, I thought we did really well. Our kids fought and battled, and we gave ourselves a chance. It wasn’t perfect, but it was really, really good.”

While this may be the end of the season, given the Frogs’ track record and recent success getting to the Sweet 16, it’s not goodbye to the NCAA Tournament.