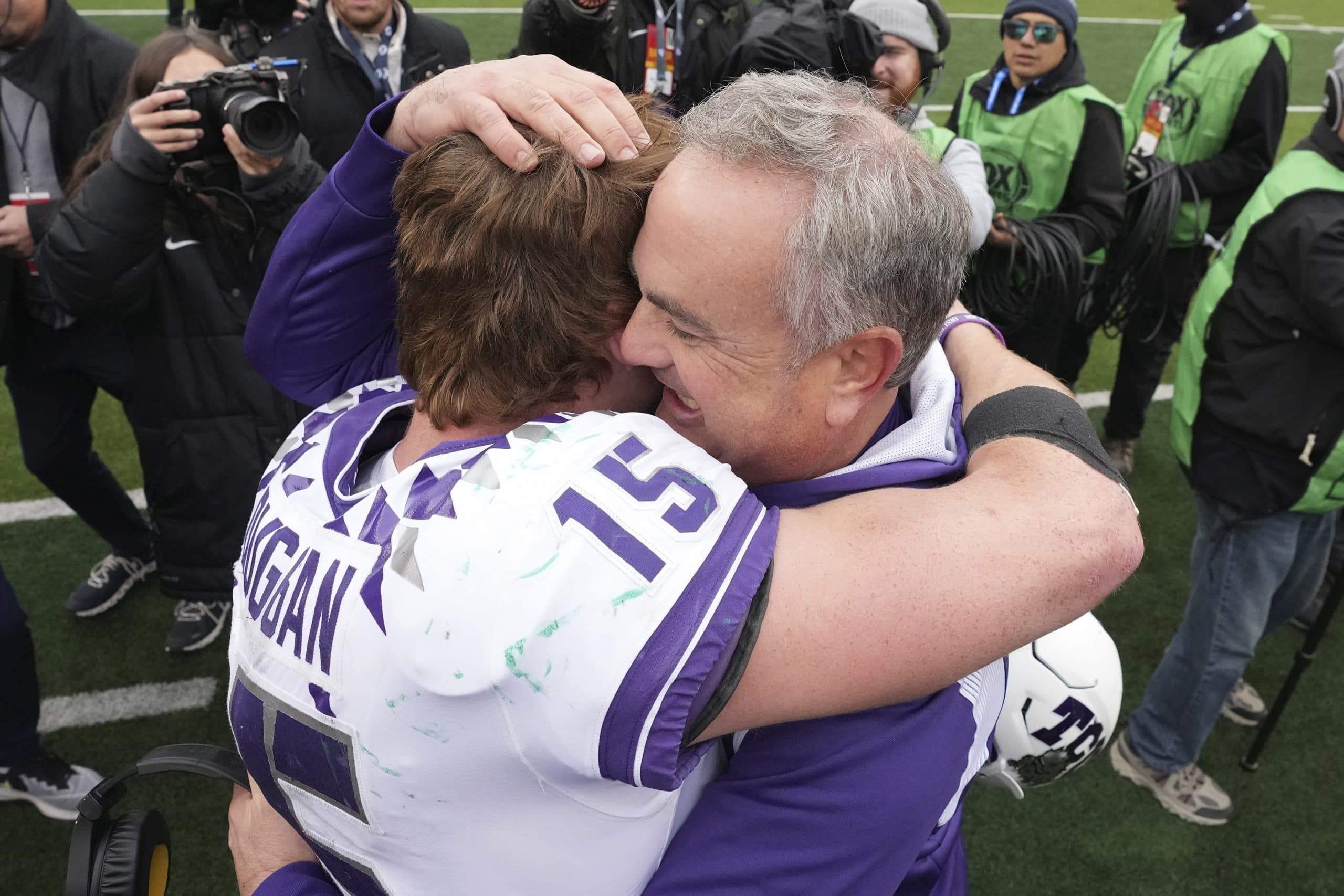 By Jeff WilsonNovember 21, 2022No Comments

Max Duggan gutted TCU to a win over Baylor, and coach Sonny Dykes knows it (The Associated Press/LM Otero).

MEAD, Colo. — Vacations these days, in the age of running my own website (Rangers Today) and as Frogs Today quickly grows from an infant to a grown-ass man, are more like working from somewhere not in Texas.

I’m not going to break my back this week, but some work has to get done.

But the only two things I really wanted to do were watch to the TCU-Baylor game and to go get the world’s best pizza, Pietra’s in Wheat Ridge (the sister location, Randi’s in Arvada, is just as good). Both have been accomplished.

First up, though, were the Horned Frogs. Hey, it was work.

So, I commandeered the living room TV at my sister’s house and the rocker/recliner from just before kickoff until I finally stood up so that I could better hear the postgame interview with coach Sonny Dykes.

Not so, Dykes said. TCU practices it all the time. It might have looked chaotic to Feldman, Dykes said, but it wasn’t to TCU.

My takeaway is that was the second-best TCU win of the season, trailing the Texas win Nov. 12.

TCU showed in that one an ability to win any kind of game. The Frogs showed Saturday that they can win without their best players.

That’s a credit to A) quarterback Max Duggan’s determination (I could use another word, but I already hit my curse limit in the lede), B) the coaches’ unwavering insistence of playing just about the whole depth chart, and C) experience is still being king in a game that is changing each season because of the transfer rules and Name, Image and Likeness.

The day-after takeaway is that the schedule is finally giving TCU a break this weekend at a time when it is badly needed. Iowa State plays really well defensively, and TCU can’t overlook the Cyclones. But …

The Frogs should be able to still win the game while allowing injured players a chance to get healthy. Derius Davis did not play against Baylor, and fellow wide receiver Quentin Johnston and running back Kendre Miller were injured in the second half and unavailable for most of the fourth quarter.

One more takeaway: TCU should enter the Big 12 championship game 12-0 against (probably) Kansas State. If the Frogs should lose, they would get knocked all the way down to the Alamo Bowl. Kansas State, as Big 12 champion, would get the automatic bid to the Sugar Bowl even with three losses.

The Sugar Bowl probably hates that idea. The NCAA and its TV partners probably do, too. The conspiracy theorist in me wonders if Big 12 commissioner Brett Yormark and TCU athletic director Jeremiah Donati might be on the phone this week searching for a loophole in the bowl agreement just in case.

The TCU men’s team is 3-1 ahead it gets ready for a trip to Florida this weekend for the Emerald Coast Classic.

It’s possible Miles doesn’t play, and it wouldn’t surprise coach Jamie Dixon in the least. The Frogs are working on a second straight season of having to shuffle their lineup in the early going.

Dixon said the Frogs are in the midst of reinventing themselves from the healthy team that demolished Alabama and Paul Quinn in the preseason. Things turned around Thursday against Louisana-Monroe as TCU rolled to its coziest win of the season. Players said they played with intensity, and it showed in their defense and rebounding.

The Frogs could win games last season without good shooting performances because they played defense and rebounded. They lost a week ago to Northwestern State as all three facets failed them.

And once Baugh and Miles return, the Frogs will have to re-reinvent themselves.  They will have to find their rhythm again. The good news is, in theory, TCU would have enough time to lock in for the start of Big 12 play.

That kind of break would be long overdue.

One of my best friends and ex-TCU roommate, Derek Robertson, taught me a valuable lesson in 1994 — to never give up on a game. A Colorado native, I was a big Colorado football fan. I grew up on it. The Buffaloes were playing at Michigan in a big early-season game, and were blowing it. But they got a touchdown and needed a three-and-out to have a last gasp. TCU was playing Texas that night and I wanted to bail on the Buffs to get good seats. Derek refused. Michigan had to punted. Colorado ran one play, a nice pass from Kordell Stewart to Michael Westbrook, and spiked the ball. The rest is history, as Stewart launched a Hail Mary that was tipped into Westbrook’s arms. What does that have to do with TCU? Well, anyone who bailed on Saturday’s game after the failed 2-point conversion late in the fourth quarter missed a thrilling end. Frogs Today didn’t. Here’s our latest, in case you missed it.

Breaking down the winning kick

Hair of the Frog: Bear down

It’s Thanksgiving week, so TCU sports teams will be dialing back a little over the next seven days. So will Frogs Today, though not all that much. Check for our shows and check out what teams need your support.

Adios, Tennessee:  Ranked teams get upset all the time, as was the case Saturday when No. 5 Tennessee was soundly beaten/embarrassed by South Carolina.

But when it’s a team that many believed was more deserving of being in the College Football Playoff top four than TCU, well, we probably ought to take a couple shots. Not at the team, but the many pundits who are now having to put their feet in their uninformed mouths.

We’ll zero in on two, starting with Stephen A. Smith. He needs to stick to whatever it is he thinks he knows best. It certainly isn’t college football. He said last week that TCU hasn’t played anybody, ignoring that the Frogs have the No. 1 strength of record. Depending on the formula, TCU has a higher strength of schedule than Tennessee. Facts have never been Stephen A.’s friend.

Next up is Paul Finebaum, a longtime SEC sychophant. He’s probably still reeling from Alabama having two losses. ESPN’s Holly Rowe set him straight the other day, but he and Stephen A. were on the same anti-TCU/pro-Tennessee segment of a show that no one should watch. Here are the morons now.

Here’s a guess: They will next be hopping on the Southern Cal bandwagon.

Super 70s goes Caddyshack: As a devout Caddyshack fan, I couldn’t leave this one out. The Twitter account Super 70s Sports has done it again.

Sometimes Don Shula would call a time out just to remind Dan Marino there was no gambling at Bushwood and he never sliced. pic.twitter.com/e1loYHF6JX

The latest to appear is this guy, Josh Mancuso, who has started imagining how teams decided on their mascots. This one has made the rounds. Maybe this belongs in the ICYMI section.

It’s how TCU might have come up with Horned Frogs. It’s pretty good, but the best one is Stanford.