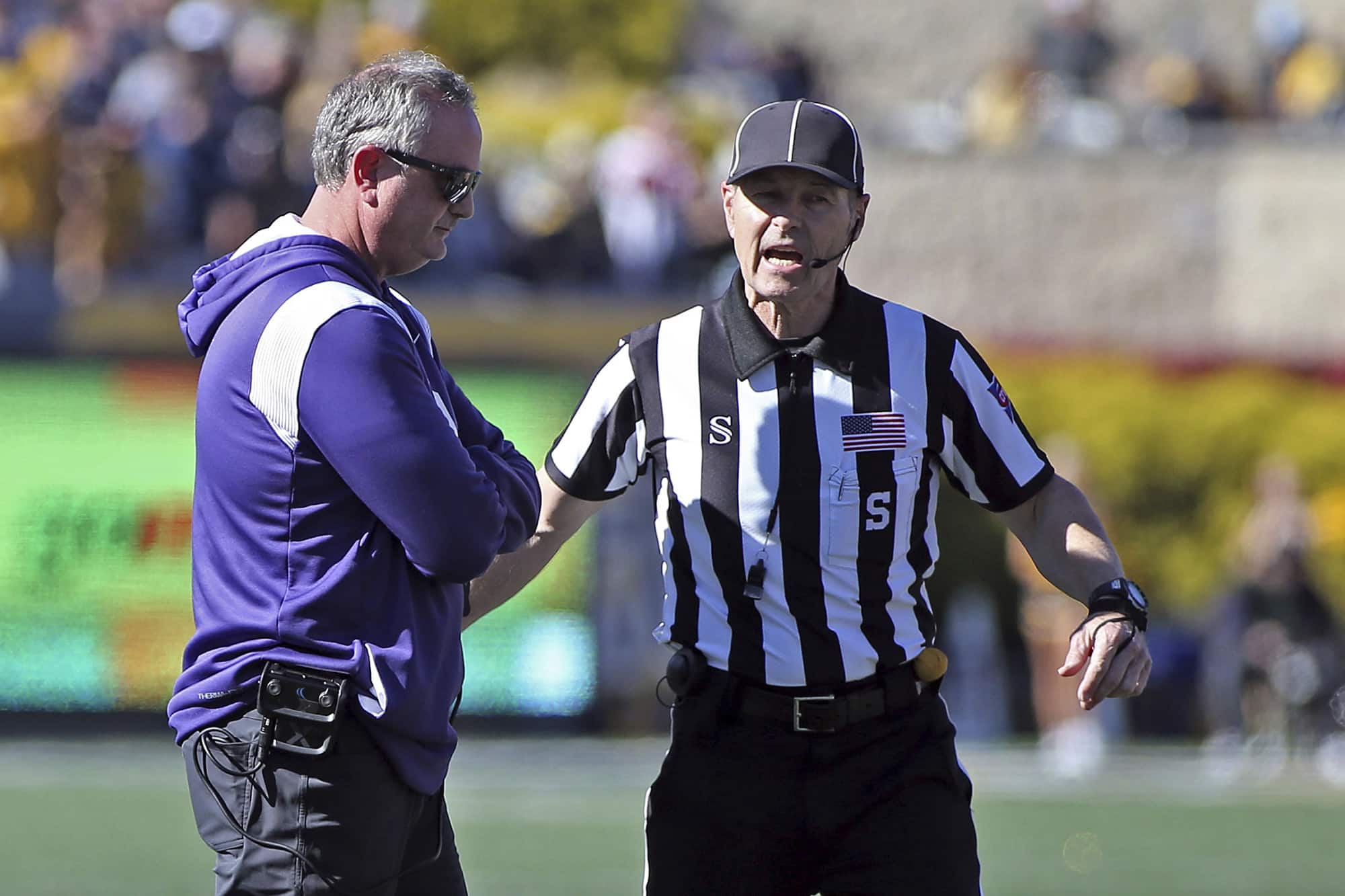 By Jeff WilsonOctober 31, 2022No Comments

TCU coach Sonny Dykes wasn’t exactly thrilled with the officiating Saturday in the second half of a tight win at West Virginia (The Associated Press/Kathleen Batten).

You play to win the game, a former NFL and Power 5 coach once spouted.

Just win by one, the current special assistant to the head coach at Texas said every week for 21 years before and after TCU games.

The problem is that doesn’t work for top-10 teams.

So it was Saturday, when the Horned Frogs won 41-31 at West Virginia. A last-minute touchdown beat the Vegas predictions (more on that below) but didn’t beat the perception of what the No. 7 team in the country should do to an also-ran.

The local Associated Press reporter, just doing his job, asked TCU players if the win wasn’t satisfying or if they were unhappy because the game was so close in the fourth quarter.

Maybe relieved is better adjective. TCU knows it didn’t play its best game, but managed to win anyway. The breakdowns the Frogs felt kept West Virginia in the game are easily correctable, and fixes can be made before facing Texas Tech on Saturday at Amon G. Carter Stadium.

The early line on that one shows TCU favored by nine against a team that lost at home by four touchdowns to unranked Baylor.

The Frogs will take a narrow win to improve to 9-0. The rest of the country, though, might not.

This would normally be filed under “The lighter side” down below, but it’s too good to not give ample attention to because of what happened and who it happened to.

Barstool Sports mastermind Dave Portnoy was coasting to an $80,000 win Saturday with less than a minute to go in the TCU-West Virginia game. TCU was favored by 7.5 points. West Virginia was well on its to a 34-31 loss, preventing TCU from covering the spread.

Frogs fans know what happened with 20 seconds remaining, as Max Duggan threw 29-yards to Savion Williams for a touchdown on a fourth-and-1 play.

For Portnoy, it’s a bad beat. Really bad.  Portnoy, who many consider to be a Grade-A a-hole is worth an estimated $120 million, so he’s going to be OK.

But the loss hurt, and the painful moment can be captured below.

My mortal lock was West Virginia +7.5 against Tcu. Wv was down 4. Tcu ball at WV 35 4th and inches. Wv had no timeouts. Tcu threw a bomb to end the game. pic.twitter.com/mZEx8aLSUU

It won’t comfort Portnoy to know that TCU was simply trying to draw West Virginia offsides to get an easy first down. Had the Mountaineers not moved, TCU coach Sonny Dykes said he would have called for a timeout and sent in the Frogs’ best run play.

Frogs Today means business, for those who were still wondering. Two reporters were dispatched to West Virginia, one without a valid driver’s license. We will again have pregame and postgame shows before Saturday’s home game and our usual full slate of shows during the week. That includes the State of the Frogs with Dykes. We wrote a lot, too. Here’s our latest in case you missed it (it’s worth the subscription).

2023 baseball schedule is out

Football? Yes. Frogs Today TV? Yes. All other TCU sports including the volleyball team playing host to the No. 1 team in the country? Heck, yes.

So, when Kiffin met with ESPN for a postgame interview Saturday after the Rebels won 31-28 at College Station, it was showtime.

Kiffin took a shot at the recruiting class and hammered the softball the ESPN reporter tossed him to close the interview.

“Maybe Jimbo has a Joker outfit for me.”

Kiffin is no angel. In fact, he appeared to call A&M freshman defensive back Bryce Anderson a “b—h” during the game.

Fisher, who might be the most hanted man in Texas right now, is scrambling to save a season that has seen the Aggies lose four straight games to fall to 3-5 overall and 1-4 in the SEC West. He also suspended three freshmen last week for allegedly smoking weed in the locker room before the game.

One fan said last month that it would be cheaper to hire a hitman to rub out Fisher rather than pay his massive $86 million buyout. The remainder of his 10-year, $95 million contract is fully guaranteed.

Another bad contract: Fisher isn’t the only coach whose massive contract is a potential dud.

The only fight Michigan State showed was after the game, when an estimated 10 players allegedly attacked a Michigan player. Wolverines coach Jim Harbaugh called out the incident in his postgame news conference, and the conference and police are investigating the incident.

Suspensions were handed down Monday to four players. It’s the least Tucker could do for that contract.

Footage of the scuffling pic.twitter.com/cipLWi5RBS