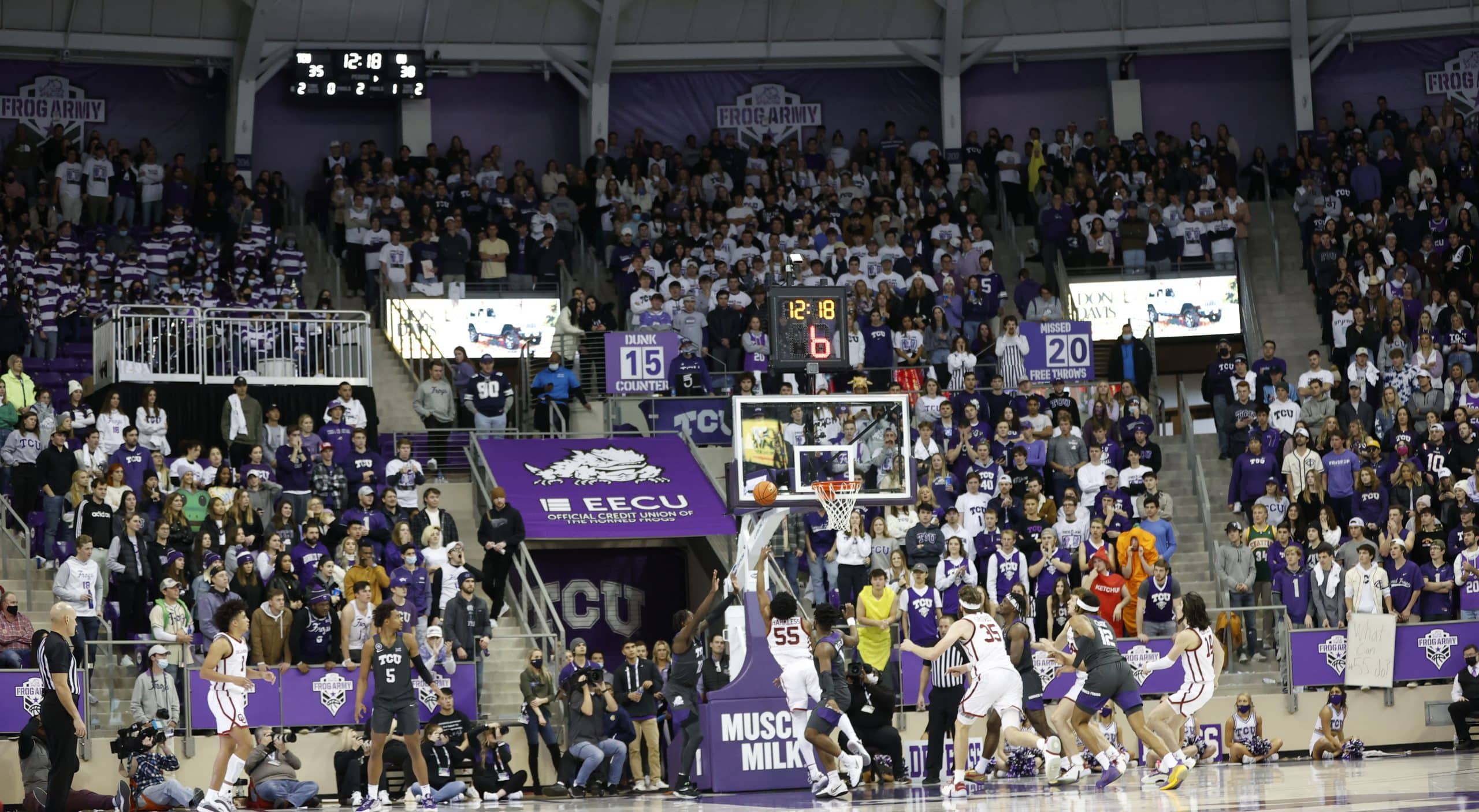 FORT WORTH — Schollmaier Arena was the place to be Saturday afternoon in Fort Worth.

Don’t take our word for it. Ask any of the 2,144 students who took over the student section and spilled around the arena to watch the TCU men outlast Oklahoma 59-58 in overtime.

The student attendance set a record for Schollmaier Arena since the gym was reconfigured for the 2016-17 season. The total attendance mark of 7,175 was the fifth-largest Schollmaier  crowd.

Coach Jamie Dixon and the players heard every one of them.

“Loved it. Loved it,” said Chuck O’Bannon Jr., who hit the game-winning 3-pointer late in OT. “Credit to them, too, for this win. The crowd was big for us. The crowd was huge.”

Said guard Micah Peavy, who matched O’Bannon with a team-high 11 points: “We need that every game.”

There were big roars throughout, including after an O’Bannon dunk gave TCU a first-half lead. Damion Baugh’s block of an Oklahoma 3-pointer with 1.4 second left in regulation did, too, and so did Eddie Lampkin Jr.’s no-look pass in overtime. The biggest roars were reserved for O’Bannon’s 3 and for the final horn.

TCU won twice last week to improve to 2-1 in Big 12 play. The Frogs are on the road for their next two games and return home Jan. 25 against Texas.

To the students, Dixon would advise that records are made to be broken.

“Wow. Have fun?” Dixon said to open his postgame press conference. “The students had fun, I think. I hope. God, it was great to see them there and great to have a home-court advantage second to none. That was tremendous. Boy, it would be great if we could do that every night, wouldn’t it?”

Big things are happening down the street with the men’s tennis team, which entered last week ranked No. 5 in the country but would be tested over the weekend against No. 1 Florida and No. 4 Tennessee.

The Frogs passed the first test.

TCU knocked off Florida 4-3 on Friday at the Friedman Tennis Center, marking the first time TCU has defeated the nation’s top team at home. TCU won the No. 1 and No. 2 matches in singles and doubles, including Luc Fomba defeating reigning national champion Sam Riffice, and sophomore Jake Fearnley won the final singles match in straight sets to clinch the win.

Here’s coach David Roditi, the former All-American at TCU, breaking down the win.

The Frogs’ fortunes turned Sunday as  Tennessee rallied to a 4-3 win by winning four of the six singles matches.

The tough Southeast Conference foes gave TCU a taste of what things could be like in the Big 12. Baylor opened the season ranked No. 2 in the country, and Texas was No. 3.

Most events this week are taking place on the road, including both of the men’s basketball’s games. The women, though, are scheduled to host two in-state rivals at Schollmaier Arena. All the fun starts Wednesday.

• The biggest loser in Big 12 men’s basketball last week was Baylor, which entered the week undefeated and ranked No. 1 in the country. The Bears, though, became the first No. 1 team in the history of the Associated Press poll to lose at home twice in the same week. Texas Tech got them Tuesday and Oklahoma State, the Frogs’ next opponent, won Saturday in Waco. No. 19 Texas Tech had won three straight conference games until losing Saturday at Kansas State.

• The transfer portal continues to play havoc on college sports, and no Big 12 team is immune from it — not even the high-paying Texas Longhorns. Their best quarterback last season, Casey Thompson, picked up and moved on to Nebraska, which is interesting. The Cornhuskers are nowhere near the height of their glory days, kind of like the Longhorns. Maybe Thompson was scared off by millionaire Quinn Ewers, or scared that Ewers would gobble up all of the NIL money. Oklahoma is bracing for the departure of QB Caleb Williams, especially after wide receiver Mario Williams followed coach Lincoln Riley to USC. One thought, though, is that Williams is trying to use the portal as leverage to get more money out of the Sooners’ NIL army. Former Eastern Michigan player Charlie Batch offered Williams $1 million in NIL riches if he transfers there.

• The end of the college football season came Jan. 10, when Georgia beat Alabama to win the CFP college playoff. The final buzzer gave outlets the license to begin making their annual clickbait way-too-early predictions. Athlon came up with way-too-early Big 12 predictions, and I clicked on it. Multiple times. Athlon is forecasting a Baylor repeat and has TCU finishing sixth and playing in a bowl game. The offense should be better under Dykes, Athlon says, but the Frogs must clean it up on defense.

As we’re evolving, we want to get more readers to sign up to receive our emails. We think that is another way, perhaps the best way, to deliver news that folks can easily access and ready. So, if find yourself prompted to enter your email address, just do it.

Eventually, Frogs Today will require a subscription for most content. We’ll keep you posted.

The Simpsons did it, of course: When it comes to TV sitcoms, I like mine animated. I’m pretty loyal to South Park, Archer and the early years of The Simpsons. There’s a South Park episode in which Butters tries to become a superhero, but all of his ideas have already been done by The Simpsons.

To that end, the longest-running scripted show in TV history has a deep arsenal of things it has covered. One of many great lines stands as a tribute to comedian Bob Saget, who passed last week.

“When I want to laugh, I’ll take Bob Saget, thank you very much.” pic.twitter.com/6JyDnDqk4y

Two for one: The wonderful Twitter account Super 70s Sports makes me laugh every day. Every day. This one from Saturday is a classic wrestling promo, which are always entertaining, from another fun account No Context Flair. You should probably follow both.

Somehow, Ric Flair is still alive and kicking. Roddy Piper died in 2015 at only 61. The wrestling life was a tough one back in their heyday, with multiple shows a week, steroids in the veins, other illegal things in their veins, and a physical toll taken on their bodies.

When Flair and Piper get this fired up, you may as well kiss your ass goodbye because there’s no way out.

Bad golf shot: I can hear Otter now: “Your left arm is straight, but you’re not keeping your head down.” That’s an Animal House reference for you all kids out there.