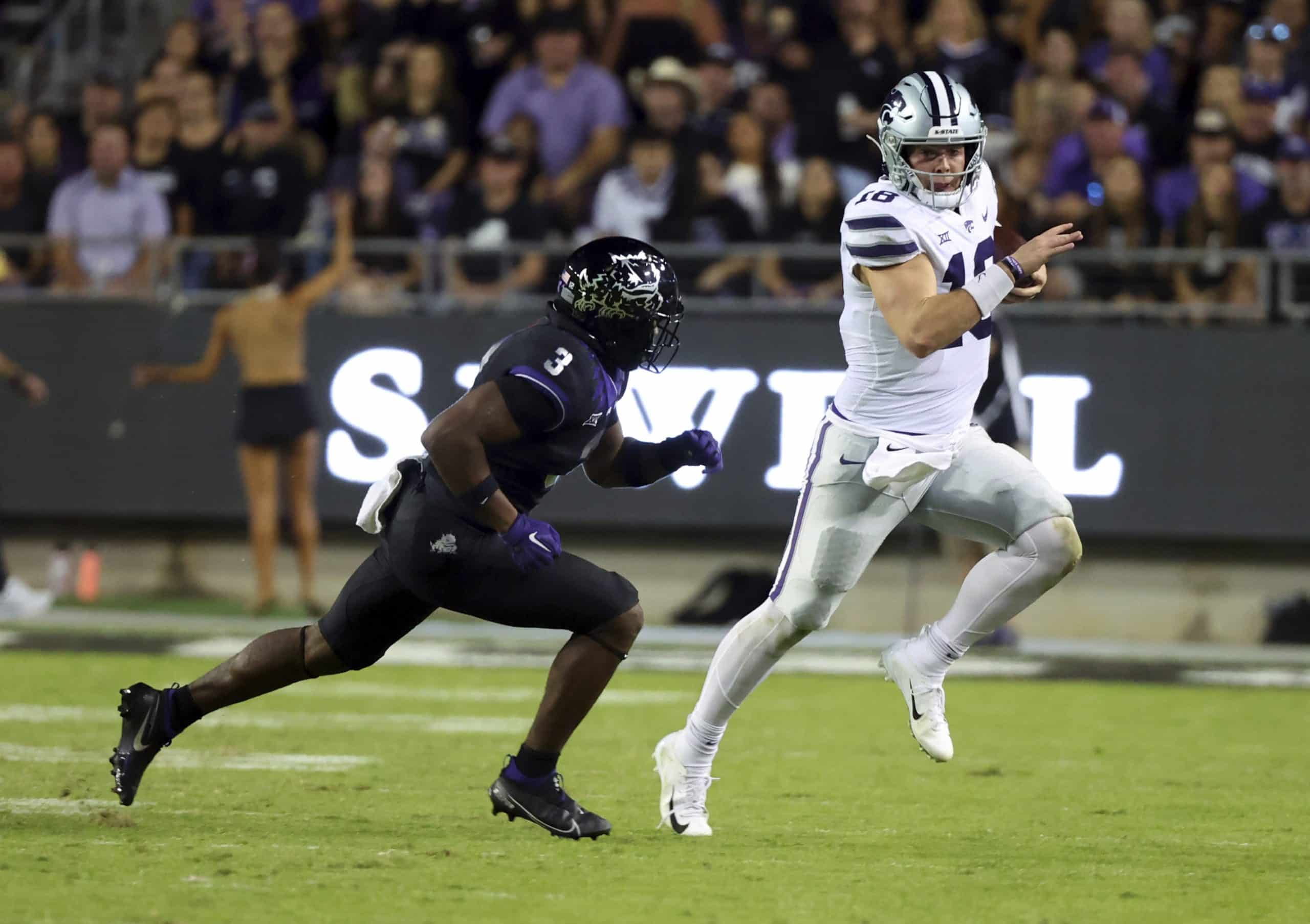 By Jeff WilsonOctober 25, 2022No Comments

Mark Perry and the TCU defense figured out Kansas State backup quarterback Will Howard in the second half of a 38-28 win (The Associated Press/Richard W. Rodriguez).

FORT WORTH — Fans from the states of Oklahoma and Kansas saw their four Big 12 teams get swept this season by TCU, but according to them each loss was a fluke.

Hasn’t played anybody yet, at least not at full strength.

And just wait until these schools get their hands on TCU again.

Regarding the quarterback thing, TCU was ahead each time a QB was forced to leave. The targeting hit by Jamoi Hodge on Oklahoma’s Dillon Gabriel was ugly but unintentional. Hodge was emotional on the sideline following his ejection and even reached out to Gabriel after the game, so there goes the dirty theory.

And there’s this: TCU lost its starting quarterback in the season opener and is playing with its backup. Max Duggan is just really good.

Injuries are part of the game, all games in all sports. It’s not like TCU is playing with a full deck. The Frogs are down three key linebackers and haven’t played with their projected starting safeties together in the same game this season. A couple of wide receivers are dinged up, too.

This is one of the most physical TCU teams in years. The Frogs play hard, they’re strong late in games, they recover faster, and they’ve just been better when it’s mattered most.

So, in short, get over it. The Wambulance is full.

The busiest time at Frogs Today is Friday through Monday. That’s usually the way it works at sports media outlet, and that’s the way it is at Rangers Today (subscribe here), too. And that’s fine. It’s what we signed up for, though when I signed up I didn’t have a wife and two kids who are active in sports. Weekends are busy for everyone, so we get it. Here’s our latest content, in case you missed it.

Hair of the Frog: Poetry in motion

Don’t go too crazy Friday night, kids. Got to be fresh for the 11 a.m. kickoff as the football team aims to improve 8-0. There is more happening this week than just that, though. Keep an eye all TCU teams in action. As always, be sure to check out Frogs TV throughout the week.

This one is staggering, as the five pitchers mentioned are all in the Hall of Fame with Ryan.

By the way, give the documentary Facing Nolan a watch. TCU graduates Reid and Reese Ryan would appreciated it (Wendy, too).

Then he struck out more batters than Warren Spahn, Bob Feller, Juan Marichal, Tom Glavine, or Don Drysdale did in their entire careers *after* that. pic.twitter.com/mc803DM181

Classic country: If you’ve been a longtime reader of the Frogs Today weekly newsletter, you know that I’m a big fan of Waylon Jennings. This song might be my favorite of his, and it’s not even his song.

It’s a cover of Can’t You See by the Marshall Tucker Band, with a few variations in the lyrics. I’m not sure why I like so much. I just do. Another cover I like? Travis Tritt doing Take It Easy by the Eagles.

Like father like … daughter?: The pull-my-finger gag is classic, and which little kid doesn’t love it (they all do)?

But this girl returns fire. Hope she was wearing a diaper.

Bad golf shots: A couple things about this one. Naturally, the dude thought he was going to save a stroke a by hitting from the hazard. Miraculously, the ball stays up for another chance after his first unbelievable shot.