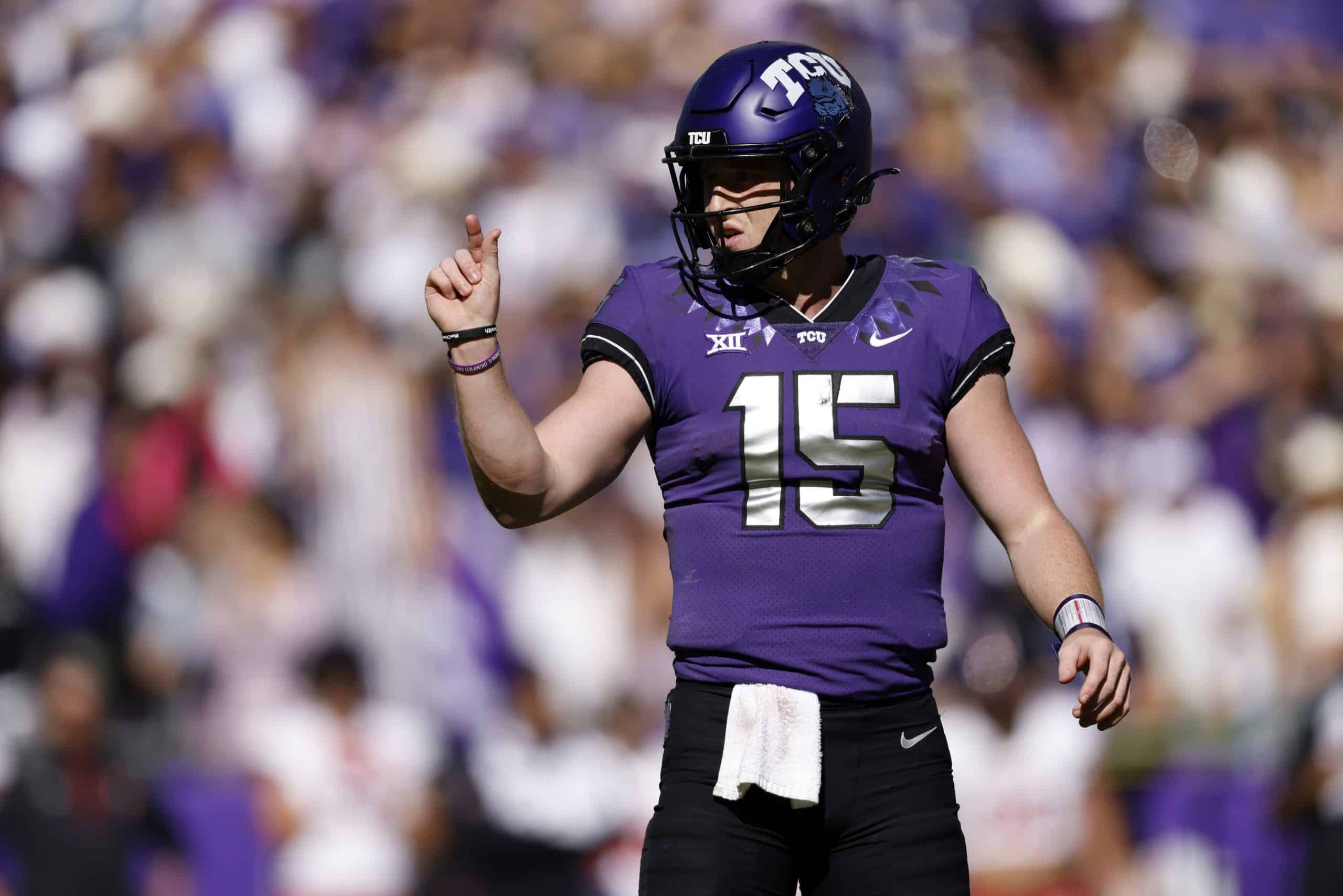 Frogs Today weekly newsletter: As long as Frogs play like they have all season, CFP committee can’t ignore them

By Jeff WilsonNovember 8, 2022No Comments

Home » Frogs Today weekly newsletter: As long as Frogs play like they have all season, CFP committee can't ignore them

Max Duggan and the Frogs are in the top five of the College Football Playoff rankings by this much (The Associated Press/Ron Jenkins).

FORT WORTH — The College Football Playoff selection committee revealed its second round of rankings Tuesday night, and things were bound to look much different than the committee’s initial release.

TCU was ranked seventh last week, and half of of the teams in front of them lost Saturday — No. 1 Tennessee, No. 4 Clemson and No. 6 Alabama. It would make sense that the last four unbeaten teams would be ranked first through fourth, but this is the CFP committee.

After 2014, no one around TCU is going to trust a thing that committee does.

So, it wouldn’t have been shocking at all to see Tennessee ahead of the Horned Frogs on Tuesday night. It would have been disappointing, with the Frogs ranked fourth in the latest Associated Press poll, but not shocking.

The committee was probably looking for a way to keep Alabama and Clemson ahead of TCU, and maybe get Oregon and USC to vault the Frogs.

Alas, TCU climbed to No. 4 ahead of Saturday’s game at Texas.

Coach Sonny Dykes and the TCU players claimed Saturday after the Texas Tech win that they didn’t care about the rankings, which might lead a cynical man to roll his eyes.

TCU knows where its ranked. Dykes said that the Frogs were playing tight the past few weeks … after climbing into the top 10. The enormity of the situation might have caught up with the program and was something Dykes was prepared to investigate this week.

The Frogs know. They care. Nothing wrong with it. But, as Dykes said, it can’t burden them.

Just play like TCU. That’s been good enough so far.

Arkansas-Pine Bluff put on a first-half shooting clinic Monday night to open the 2022-23 basketball season, and the Golden Lions had the TCU men sweating deep into the game.

Those things aren’t supposed to happen, but they do and they did, and so did TCU’s 73-72 victory.

Emanuel Miller said that the narrow win, in which Pine Bluff hit 11 3-pointers in the first half, should serve as a wake-up call to the Frogs. They entered the game ranked No. 14 in the country and need to understand that every opponent will come gunning for them. There is no overlooking any foe.

He was excited. Excited?

Dixon said he wasn’t relieved. Coaches, he said, can never be relieved. Instead, he can’t wait to get back in the gym Wednesday and Thursday so that the Frogs can get better before playing host to Lamar at 7 p.m. Friday.

“I’m fine,” he said. “We’ll get it fixed. We’ll get better, and I’m looking forward to the opportunity. So excited, I guess, would be the word, not relieved. I’m excited.”

Dixon said his team was nothing like the one that scrimmaged so well against Alabama and Paul Quinn, two vastly different programs who were both blown out by the Frogs. He speculated that maybe playing without suspended guard Damion Baugh was a factor. Whatever happened, including Pine Bluff playing very well, TCU didn’t answer the opening bell until just enough time remained.

“To come out and play like this was just an indicator of our lack of maturity and handling being talked about a little bit,” Dixon said. “But we did fight down the stretch, we found a way to win, and that was a good sign.”

I don’t think anyone is missing football games these days, but stuff happens. Like youth sports. The Wilsons weren’t saddled with any Saturday, but Sunday was a marathon. Five baseball games for the boy, starting at 9:30 a.m. and ending at 11 p.m. He did not want to go to school Monday, and, believe me, I didn’t want to take him. The point: I missed all of Sunday’s NFL action and the fallout from Saturday’s college action. Frogs Today, though, was all over the weekend. Here’s our latest, in case you missed it.

Monday Morning Quarterback: Frogs Up for …

Hair of the Frog: Raider rash

As was mentioned above, basketball season has started, soccer is dancing and football has its biggest game of the season. It’s going to be a good week. Here’s where and when TCU sports teams will be playing.

That’s quite a Mattress:  The Houston Astros wrapped up the World Series on Saturday night, presumably without the use of trash cans and buzzers. They were the best team in baseball from mid-May on, so they are definitely worthy champions.

Their biggest fan, or at least the one who gambles on them the most, is Jim McIngvale. You probably know him better as “Mattress Mack.” He was an even bigger winner than the Astros.

McIngvale cashed $75 million in bets, with the biggest a $3 million wager he made in May with the Astros at 10-to-1 odds to win the World Series.

Online sports betting is illegal in Texas, so he flies to a nearby state where it is legal and gets his action.

Part of the winnings serve as a hedge for the potential losses his furniture business faces for his annual promotions. This year, customers could win up to $3,000 in free furniture with an Astros World Series win.

The rest of it is probably going to his gambling habit.

$250,000 and a pylon: LSU converted a 2-point conversion Saturday night in overtime to beat Alabama and knock the Crimson Tide out of the CFP picture, at least for now. Yeah, Alabama has two losses, but also has a spell on the CFP committee.

Fans at Tiger Stadium in Baton Rouge, La., were, naturally, fired up. They stormed the field, and the SEC delivered a $250,00o fine to LSU for failing to provide a safe exit from the field for Alabama players and staff. Money well spent.

But this blatant act of burglary can’t stand.

Impressive: Upon seeing their son caught red-handed, the parents of the kid in the above Twitter embed had the following reaction:

Bad golf shots: A compilation of mis-hits from some of the world’s best golfers. Enjoy.