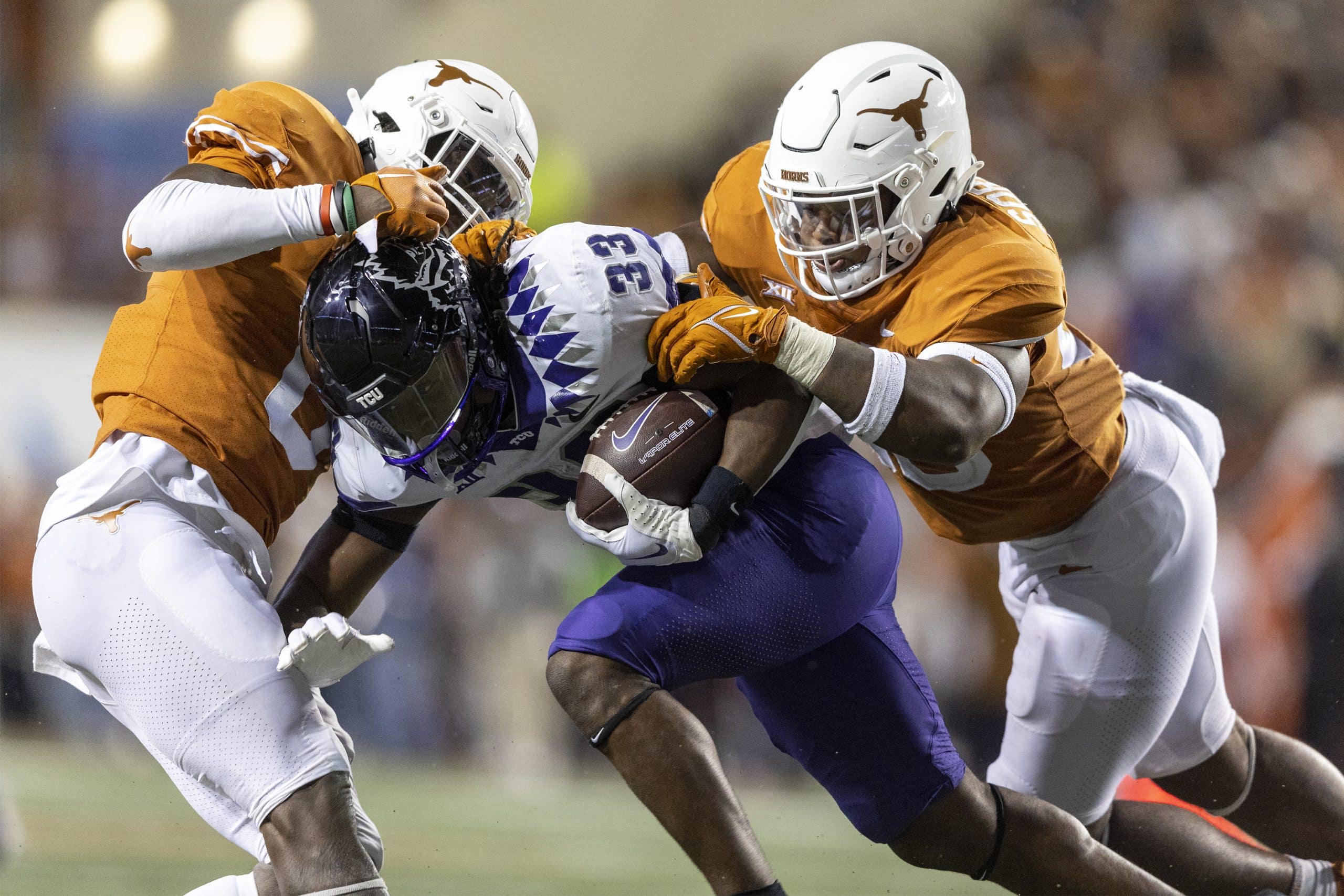 By Jeff WilsonNovember 14, 2022No Comments

Kendre Miller was a hard man to tackle Saturday night against an average Texas team (The Associated Press/Stephen Spillman).

This is something that has needed to happen for a few seasons now, and no one has really done it. Or, at least, no one has had any success doing it.

It’s really hard to believe and is especially hard for Longhorns fans, national media and oddsmakers to accept. Texas, the state university in the most football-rich state in the country, should never be mediocre. Never.

But it’s happened. It’s reality, and not just in light of TCU beating the Longhorns on Saturday night. Beating Texas is old hat for TCU these days.

And make no mistake what happened Saturday night: TCU beat Texas. It wasn’t that the Texas offense had an off night. The better team won the game.

So what’s wrong in  Austin?

Some fans are squawking that boosters have too much say. The money Texas NIL groups have to offer hasn’t helped much so far. Maybe it’s hurting.

That’s what it has to be, right? The Longhorns aren’t pulling on the same rope. Or maybe they are, just not in the same direction.

That’s strike against the coaching staff, which also isn’t cultivating all that talent.

The coaches would never say that. They have to protect their phoney baloney jobs.

It takes time to build a program, they would say, apparently nine years and running since Mack Brown was run out. Steve Sarkisian is the third coach trying to get Texas back. It’s not working. Some of that might be the suit he wore to the game Saturday.

Whatever the correct theory is doesn’t matter. What matters is Texas is average at college football.

It’s time for those still clinging to the past to accept that.

Football is leading the charge currently, but TCU sports are enjoying a wonder fall.

It’s a good time to be a Horned Frogs fan.

The football team is 10-0 and ranked fourth in the country, yet isn’t the highest ranked TCU team nationally.

Football is two spots behind the rifle and equistrian teams. Rifle was the national runner-up last season.

The soccer team plays Friday in the second round of the NCAA Tournament.

In case you were wondering, it is indeed a GREAT time to be a TCU Horned Frog. @TCUFootball: 9-0, ranked no. 4@TCUSoccer: advanced in the NCAA Tourney, ranked no. 17@TCURifle: ranked no. 2@TCUBasketball: ranked no. 14@TCUvolleyball: just beat no. 10 Baylor, 4th in the B12

So much is happening that it’s difficult to keep up, and it’s not just football. Soccer and volleyball have reached vital parts of their seasons, and men’s and women’s basketball are just out of the gate. Frogs Today keeps cranking out the shows, and just last week added the Purple Theory Podcast to its lineup. Check out the latest episode here. Now is as good of a time as any to play catch-up. Here’s our latest content, in case you missed it.

Hair of the Frog: Inside Austin

The football game this week is the latest biggest game for the Frogs, but it’s not the only game for TCU teams. Take a look:

This guy: There’s a lot going on here, including what appears to be a TCU fan in the lower right passing a kidney stone.

But this Texas fan will forever be cemented in meme lore.

His hair is pretty awful, but his ring finger would suggest that someone really likes it. Lots of forehead, too.

The beard needs work. Maybe this is the Quinn Ewers starter kit.

One thing is for sure: He speaks for Texas fans since Mack Brown was fired.

Super: Probably my favorite Twitter account, Super 70s Sports, cracked me up Monday morning. Most of them illicit some form of laughter from me, but this is one of the few that is suitable for the family-friendly Frogs Today weekly newsletter.

"Guys, how does the mustache look from upstairs? Awesome? Knew it." pic.twitter.com/sZKsKHL6Uv

Film session: Credit to Mrs. Wilson for pointing me to this account, though she made her discovery on TikTok. Brendon Clinton is also on Instagram and, as you see below, Twitter.

He will take game film from various college and NFL games, and act as a coach breaking down awful plays by defenses. He also breaks down the players, usually Peters and Davis. Clinton carved up Oklahoma after its loss last month to TCU. Take a look and give him a follow.