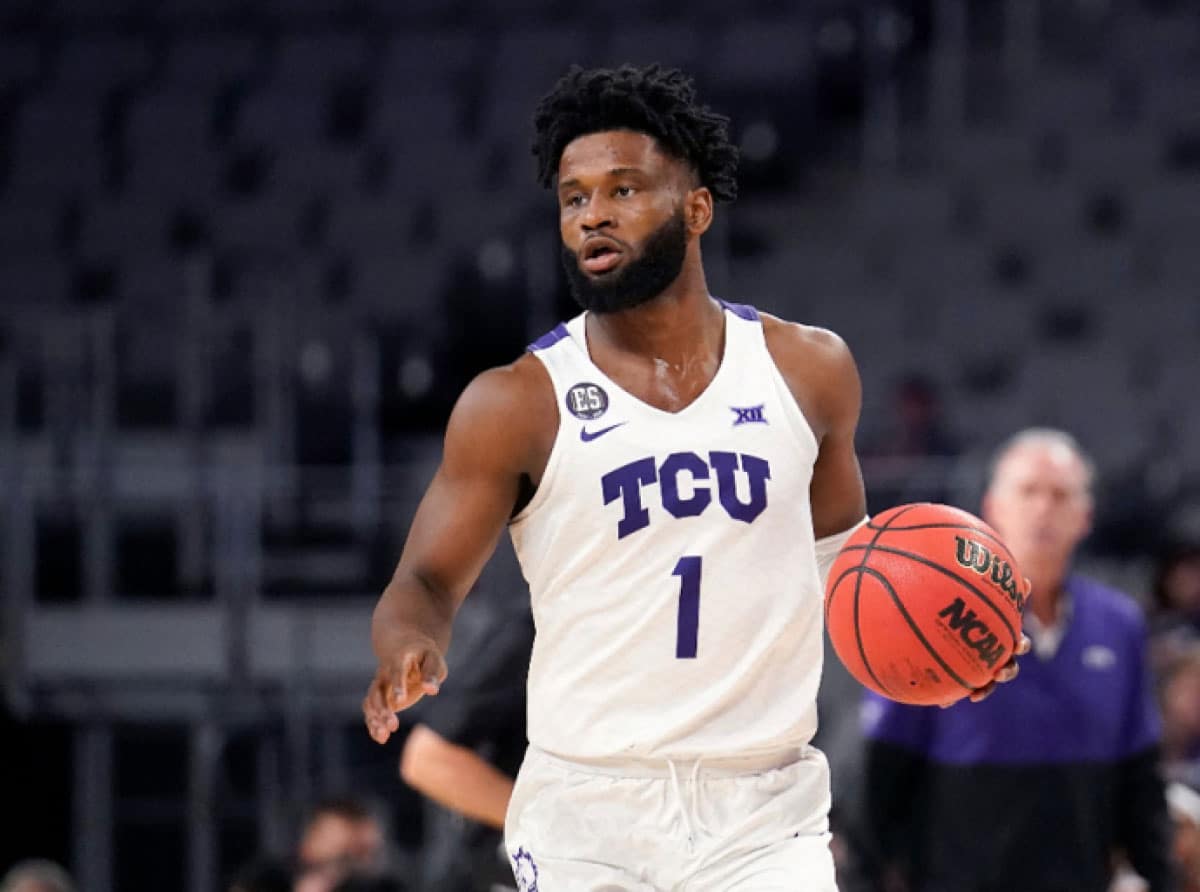 Mike Miles Jr. did not play against Kansas State and Oklahoma State but expects to play at Texas Tech (The Associated Press/Tony Gutierrez).

FORT WORTH — Simply seeing Mike Miles Jr. on Tuesday night in the postgame press conference seemed to be an indication that his right wrist wasn’t injured too badly and that he seemed to be feeling better about things.

TCU had just beaten Oklahoma State without him, and there was a sense of relief from the sophomore guard and the Horned Frogs’ leading scorer. He was cracking jokes and then said he was in the room to tell reporters who proud he was of the team for winning without him.

He also said he had targeted Saturday afternoon at No. 9 Texas Tech for his return.

“I’m going to be back, hopefully Saturday,” Miles said. “That’s the point we’re looking at. We’ll see how it feels Thursday and Friday in practice.”

It felt good enough for him to practice, but he also practiced before the past two games.

The Frogs (16-5, 5-4 Big 12) prepared to play with Miles against Kansas State, but learned less than an hour before tip-off that he would be unable to go. They lost 75-63. Coach Jamie Dixon said on Tuesday that he thought Miles would be available against Oklahoma State, too.

The difference between the two games is that the team had played a game and gained an understanding of what it had to do to win without its best player. Dixon said Miles was missed most on defense because there are always ways to find shots for other players.

“I thought the focus and preparation was good,” Dixon said. “We could look at what we couldn’t do as kind of a starting point.”

A significant factor in the Frogs’ win over Oklahoma State was the free-throw line. Not only did they manage to get there 23 times, they shot 78.3% after struggling from the charity stripe in previous games.

None were bigger than the two big man Eddie Lampkin Jr. hit with 19.1 seconds remaining to put the Frogs up 75-71. Lampkin entered the game shooting 55.6%, and the first one rattled home. The second attempt was all net.

“He’s gotten better and better than where he was,” Dixon said. “We had him in there for offense, for free-throw shooting. Given the numbers of guys we had to put in, he’s one of our best free-throw shooters.”

If the Frogs are going to survive their difficult final nine conference games to position themselves for an NCAA Tournament berth, they have can’t miss chances to score. They can give themselves more opportunities at the free-throw line by getting the ball inside more and drawing contact.

They had success with that in victories against LSU and Oklahoma, got away from it against Kansas State, but executed it better against Oklahoma State.

“We made our free throws, which we’ve been working on a lot,” Dixon said.

Not only was Miles out Tuesday, but the Frogs were also playing with two players who weren’t 100%.

Guard Francisco Farabello was dealing with cramps, and forward Chuck O’Bannon Jr. had been sick Monday. Two more guards, Maxwell Evans (shoulder) and Shadada Wells (knee) are out the rest of the season.

That left a heavy burden on guard Damion Baugh, who played all but 1:48 of the 40-minute game.

“That’s way too much,” Dixon said. “We’re playing guys way too many minutes but it’s the situation we’re in. It’s not a good recipe, but we fought through it.”

Farabello and O’Bannon should be recovered by Saturday, and a Miles return would help Dixon distribute minutes better. Dixon also said that the Frogs might consider playing Harrison Young, who started the season as a walk-on, or Darius Ford, who is a walk-on.

They have played in a combined three games covering 4:38.