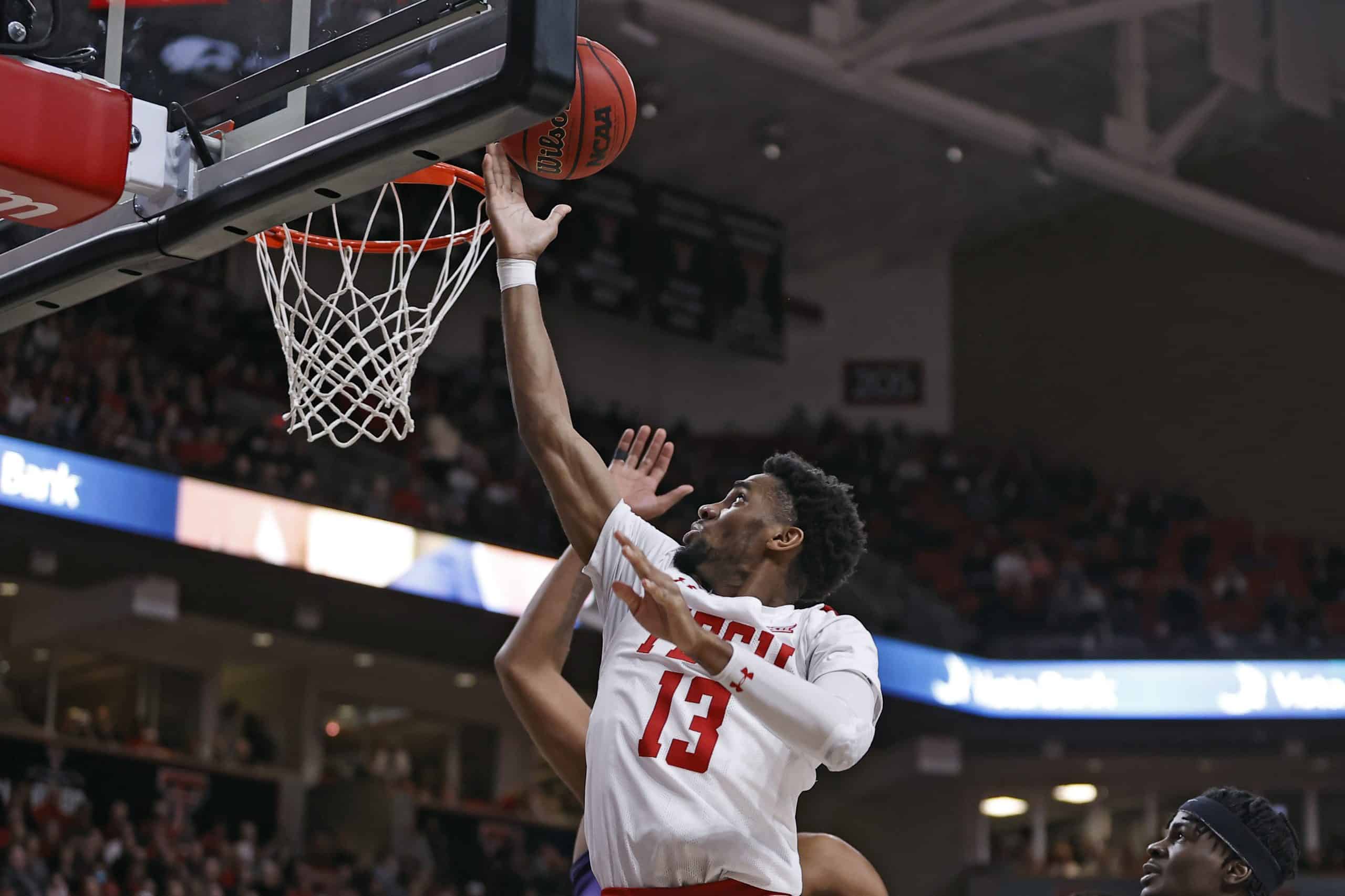 Mylik Wilson converts one of several layups for Texas Tech during their comeback win over TCU (The Associated Press/Brad Tollefson).

Halftime served as a standing-eight count Saturday afternoon in Lubbock for the TCU men.

They had landed their shots against No. 9 Texas Tech, enough of them to build a 13-point lead at with 5:22 to go. The Red Raiders fought back, as could be expected, but the Horned Frogs still led by three at the half.

They could be administered smelling salts during the break, get their cuts closed, put a cold compress on their bruises.

And maybe they did, but they never got their gloves up in the second half.

Texas Tech opened with the first nine points and never looked back in an 82-69 victory at United Supermarkets Area. TCU made it look better late, trimming a 22-point deficit, but the Red Raiders scored a unanimous decision in which they forced 20 turnovers and at one point outscored the Frogs 46-12.

“We came in here to win, not to stay close and lose,” TCU coach Jamie Dixon told Brian Estridge on the postgame radio show. “We had our opportunities and we didn’t get it done.”

So, what went so wrong so quickly and for so long? Let’s take a look.

Dixon hasn’t been happy with the turnovers TCU has piled up on offense in conference play, and the Frogs committed 20 of them against the Red Raiders. Texas Tech (19-6, 8-4) turned the miscues into 26 points.

Seven turnovers in the first six minutes of the second half allowed Texas Tech to pull away with a 31-7 run. The Red Raiders’ defense had a lot to do with it, but TCU also had several messy mistakes by players who shouldn’t have been making them.

Guard Damion Baugh had five of them. Mike Miles Jr., who scored a team-high 16 points after missing the past two games, had three.

“I’ve got to look at what we’re doing offensively,” Dixon said. “If our motion is not getting it done, we’ve got to have something to go back to.”

Texas Tech had a huge advantage in the paint, outscoring TCU 38-20, but it’s not like Texas Tech has Darvin Ham anymore. Most of those points game on a bevy of layups as TCU (16-6, 5-5) struggled with the Red Raiders’ screening and motion.

Big man Eddie Lampkin Jr. had to help on the ball, with created mismatches and lanes for Tech players to find.

Dixon said that the Frogs worked on it during practices Thursday and Friday, but they never found the right defense.

“He was forced to rotate and help because we were getting off the beat off the dribble so much off that ball-screen and handoff action,” Dixon said. “We worked on it, we talked about it, but I never got comfortable with how we were going into the game with it and certainly it hurt us.”

Dixon, though, said the defense hasn’t been right for a few weeks now. The Frogs have allowed 75, 73 and 82 points in their past three games.

“I thought we lost some things defensively in the last couple of weeks, really the last week,” Dixon said. “We’re not where we need to be. Before I thought it was too minutes for some guys, but the reality is we’re not doing what we need to do defensively. We’re not aggressive enough on the ball. We’re not loading up. Our team defense is not where it was. We’ve had some slippage in that area.”

Texas Tech has one of the best home-court advantages in the conference, as evidenced by a 15-0 record. Dixon said that the Frogs were aware that the Red Raiders would bring some intensity, that the crowd might fuel them by responding to a nice run, and that’s what happened.

“I felt they stepped up the pressure and we didn’t step up the fundamentals that we’ve worked on, talked about the last couple days,” Dixon said. “They really have gotten more aggressive, more physical, and we didn’t respond. We told them it was coming, and we just did not handle it.”

The Frogs have experienced lapses in their intensity twice previously, against Texas and Kansas State. Both of those game resulted in home losses, and came after wins that left the Frogs feeling confident — maybe too confident.

Simply put, Dixon said TCU didn’t do the things it has to do to win.

“If we had fought and outrebounded them and took care of the basketball and missed some shots or missed some free throws, I can live with that,” Dixon said. “But this is not the way you want to play when you go on the road against tough, physical team that’s going to get into every play.